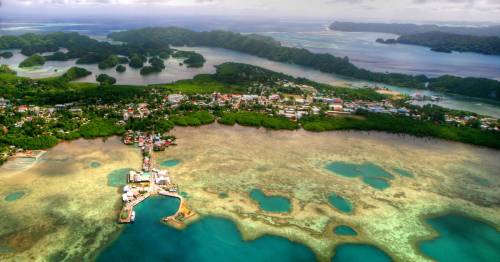 The country with the highest percentage of people who have had Covid vaccinations has been named in a bid to get other countries to boost their rollout.

An impressive 99 per cent of the population over the age of 12 in the tiny Pacific country of Palau have had a Covid jab, said the Red Cross – which puts them out in front as the nation with most vaccinations.

Palau is an archipelago of 500 islands in the western Pacific Ocean but despite its remoteness it is ahead of the pack with its vaccination programme.

The size of its population will have had an impact though as there are only 16,152 people in Palau.

The Red Cross has published the country with the most vaccinations to encourage nations to boost their rollout with Palau having moved into top spot.

Palau is an archipelago of 500 islands in the western Pacific Ocean with a population of 16,152 people
(

Last month it was Portugal who were top of the list with 80 per cent of its 10 million people having been inoculated.

In Western Europe, Portugal is still out in front with 86.4 per cent of people vaccinated while the UK’s rollout has slowed down and there are 66.3% of the population who have had a jab.

Palau is not alone amongst Pacific nations that have had high rollouts but there are many which are lagging behind – including small countries.

Palau has now beaten Portugal to top spot as the country with the most people vaccinated, said the Red Cross
(

In the UK there has been a surge in Covid infections among children that has helped leave the country with the highest case rates and deaths in Western Europe.

A lack of vaccinations for children has been put down as a reason for these worrying rates.

After one of the fastest vaccine rollouts in the world other countries have now caught up with the UK.

France, which has vaccinated more children than Britain, is among those countries with a higher proportion of the population as a whole vaccinated.

Dr Jenny Harries, chief executive of the UK Health Security Agency, said: “These data demonstrate that while our vaccination programme continues to make a huge difference, the pandemic is not over.

“While cases remain high, the vaccination programme is ensuring that this does not translate to a similarly high number of hospitalisations and deaths.

“We are urging everyone who is eligible to come forward for vaccination. It is the best way to reduce transmission and protect ourselves and those we love.”

Previous : Prince William’s plea to end Bezos and Musk’s ‘absurd’ space race backed by eco leaders
Next : Gabby Petito dead: Pals of woman killed on road trip say she ‘must have been so scared’