Coronavirus Drive-In: Apart, But Not Alone 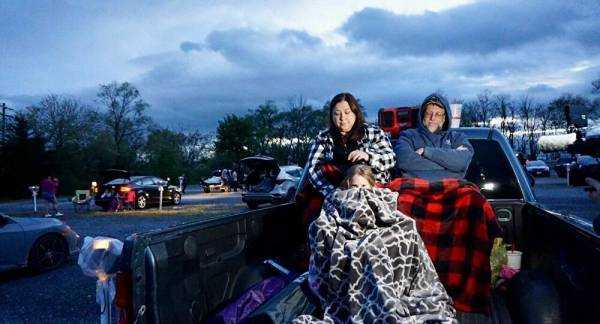 WASHINGTON (Sputnik) – Pray, love, go to the movies and mingle. Many essential social activities, seemingly put on hold by coronavirus quarantines, become possible if you are on wheels.

In the pandemic days a good old drive-in sees its resurgence across the United States, allowing for social distancing without social deprivation, a welcome respite for people who, as it turns out, very much miss each other.

A car line stretches for half a mile to a drive-in movie theater in the Virginia countryside, one of the first to get permission to reopen. Over 200 vehicles, one by one, pour in and take their slots around a big screen under the stars.

Her kids wrap themselves in blankets in an open trunk in anticipation of a cartoon about trolls’ adventures.

Drive-in theaters have been around in the US since the early 1930s. Increasingly eclipsed by more sophisticated indoors cinemas, they received an unexpected lease of new life after coronavirus eliminated competition.

The cinema operates at 50 percent of its capacity – 217 cars instead of 434 – to maintain ten-feet distances between viewers.

©
Sputnik / Artur GabdrahmanovFamilies view a film inside their cars at a drive-in movie theater in the Virginia countryside, U.S.

He plans to screen the latest releases before Hollywood took a coronavirus-induced pause and then switched to classics – “some of the retros, maybe Jurassic Park, Indiana Jones, Harry Potter.”

The audience is not picky these days.

Some would venture on a three-hour journey to join a drive-in prayer, an initiative described by its hosts as nothing short of an epiphany.

Together with her husband, Dale, she runs an event business, staging weddings and other festivities at their picturesque farm in rural Virginia. An idea to host a drive-in replacement for quarantined churches came out of the blue – they were not aware of any examples to follow.

Being with people is a major motivation for those who pray inside their cars, surrounding a wheeled platform with a wooden cross, sing along hymns, respond with honks each time they hear “Hallelujah,” flash headlights to friends and neighbors, so close and yet so distant.

“It’s odd that you can’t hug people, but it is fun to be able to see people that you know. You don’t realize how much you miss it, until you see them, just wave and talk with your windows down,” Hannah says.

“We still have two weddings for May that haven’t canceled their events. It’s very possible that we could actually have them in a hay wagon,” Dale says. “A bride and a groom will be in a hay wagon and hay will be around it, and all family members, 200 of them, will be in cars. That’s a plan.”