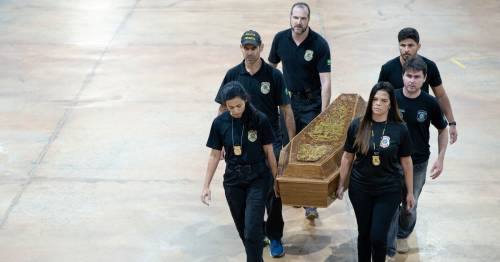 Police in Brazil are reportedly questioning five suspects over the murder of Dom Phillips, who went missing in a remote part of the Amazon last week.

Brazil’s justice minister Anderson Torres said human remains were found near where the the 57-year-old journalist and his travelling partner Bruno Pereira, 41 disappeared on June 5, with police saying a suspect led investigators to the location after confessing to the fatal shooting.

Two of the suspects are brothers Oseney and Amarildo da Costa de Oliveira, who on June 15 allegedly confessed to murdering the pair with a firearm and covering up their remains, reports the Mail Online.

However, it is reported that Brazilian detectives are said to be interrogating three more individuals over the alleged murders.

The remaining two are suspected of helping conceal the remains of Phillips and Pereira and ordering the hit, according to federal police officers who spoke on condition of anonymity.

Authorities still need to formally identify the remains, but it is claimed these are the remains of the missing pair.

The pair were in a remote jungle area near the border with Colombia and Peru called the Javari Valley, which is home to the world's largest number of uncontacted indigenous people. The region has been invaded by illegal fishermen, hunters, loggers, and miners, and police call it a key route for drug trafficking.

Police were said to have been led to the spot where the remain are buried by prime suspect Amarildo, who has now confessed to shooting and dismembering the pair, with a motive not yet clear.

Phillips’ wife issued a plea for information last week but has said “now we can bring them home and say goodbye with love” after the discovery.

In a statement, Mr Phillips’ wife Alessandra Sampaio said: “Although we are still awaiting definitive confirmations, this tragic outcome puts an end to the anguish of not knowing Dom and Bruno’s whereabouts.

“We also begin our quest for justice. I hope that the investigations exhaust all possibilities and bring definitive answers on all relevant details as soon as possible.”

Previous : Tory MP told ‘I hope you get cancer and suffer in agony’ in ‘sick’ abusive email
Next : Oscar Piastri F1 debut to be confirmed soon providing hint over Fernando Alonso’s future