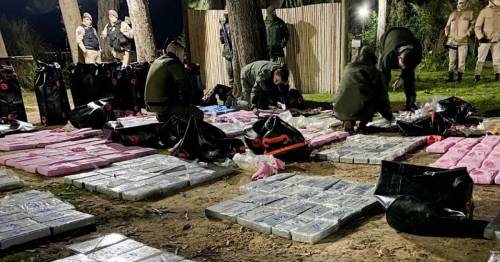 A mafia gang planning to bring over 1,500 kilos of cocaine that could end up on the streets of the UK was captured as it was being sailed out of Argentina in one of the country’s biggest ever drug busts.

Police raided 11 locations in the Argentine capital Buenos Aires and seized three small yachts that were used to take drugs out to a ship in international waters where it would then be taken to Europe.

Argentina is now a key route for drugs trafficked to Europe with cocaine moved down the massive Parana river from where it is produced in countries like Bolivia and Colombia.

Mafia gangs have considerably increased violence on the streets especially in Rosario, situated on River Parana, which is now known as the narcotics capital of the country.

Police have said that the seizure of 1,549 kilos of cocaine was the culmination of a four-year investigation and has led to six arrests.

The seizure was made after a four year police operation

As part of the operation 11 vehicles and six motorbikes were also seized along with dollars, Euro and bitcoin hardware.

Police also captured telephones, satellites and tracking devices which were being used in the sophisticated operation.

The Ministry of security stated: “Four years of investigation led to discovery of the motive of the gang which was to take drugs by sailing boat into international waters.

"Then in the open sea the drugs would be put on a ship that would sail to Europe and the same tactics were then used in reverse.

“Federal forces found part of the drugs held at a location on the river Parana in Escobar. Other large quantities of drugs were found at a home in Canning (Buenos Aires).”

Police got their tip off for the drug operation from a disgraced financier Diego Guastini who was shot dead by a moped rider in October, 2019.

He is believed to have been killed after agreeing to work with authorities and reveal some of his contacts which had already led to the Loza family being arrested for their part in trafficking drugs to Spain.

The authorities are not sure though whether Guastini was working with the mafia gang or had simply given them their names, reported Infobae.com.

Investigators believe that Argentine Gustavo Diego Marano, 48, who has been imprisoned in his home country and is now serving time in a Spain jail for drug trafficking is the kingpin behind the operation, it is reported.

The vast amount of money that the drug gang could make from taking the drugs to Europe can be seen in that a kilo of cocaine in Bolivia would be worth £1,500 compared to around £30,000 in Europe.