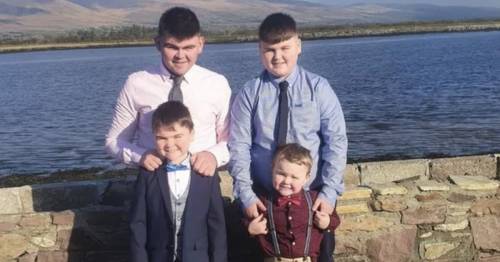 Four brothers who lost both their parents to cancer in less than six months could be able to remain at their home after a massive community fundraising drive.

Five-year-old Conor Clifford and his brothers Andrew, eight, Jack, 14, and Patrick, 21, faced being booted out after their devastating loss.

So far, the community of Milltown, Republic of Ireland, has raised almost £290,000 to ensure the boys can continue to live there.

Their mum Elaine Clifford died at the end of August, the day before her 41st birthday, shortly after being diagnosed with stage four cancer.

Weeks later, her husband Padraig, 46, started to feel unwell and later died in January after being diagnosed with aggressive cancer, reports Bristol Live.

"This heartbreaking story has touched many people near and far," wrote Mary Hayes, who organised the fundraiser.

"It has left the community of Milltown in disbelief that this could happen to one family in such a short space of time.

"In May 2021 the boys' mum Elaine was diagnosed with stage four cancer.

"After a short time and a big fight, she lost her battle to cancer on August 28 2021, leaving behind her heartbroken husband Padraig and her beloved boys.

"Padraig found it very difficult to come to terms with the loss of his soulmate, his amazing wife and mother to their four beautiful boys. Padraig tried to get on with life as best he could with the great help of family and friends who rallied around him.

"Little did Padraig know when he felt unwell in December 2021 that he too had cancer. He was admitted to University Hospital Kerry on January 17th 2022 and following tests he was diagnosed with aggressive cancer.

"Padraig fought hard to keep his promise to beautiful wife Elaine to look after their boys but unfortunately lost his battle to cancer eight days later on Tuesday the 25th of January 2022 surrounded by his loving family and friends."

She added: "The boys now reside in the rented family home in Milltown. This fundraiser is being set up to raise enough money to allow the Clifford boys to purchase their family home and secure their future.

"Any donations to help the Clifford boys reach their goal of owning their own home would be very much appreciated.

"The Clifford family are extremely grateful for the kindness and generosity they have received during this very difficult time."

Anyone wishing to donate to the GoFundMe campaign can do so here.