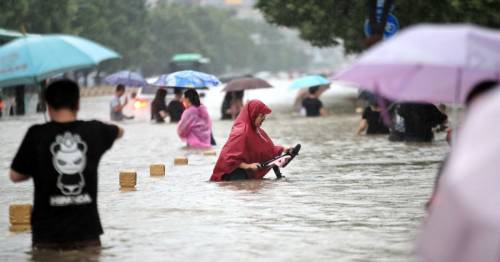 Catastrophic extreme weather on five continents at the same time prove we are experiencing the impacts of ­climate change, say scientists.

Swedish activist Greta Thunberg said: “We’re at the beginning of a climate and ecological emergency.”

With rapid attribution studies, which compare data with a simulated world where there are no carbon emissions, the urgency has become clearer.

In one, scientists found last month’s Pacific Northwest heatwave was virtually impossible without human-caused climate change and “our rapidly warming climate is bringing us into uncharted territory”.

Thermometers hit 31.2C in Ballywatticock, near Newtownards in Co Down.

Do you think we can turn the tide on climate change? Have your say in the comment section 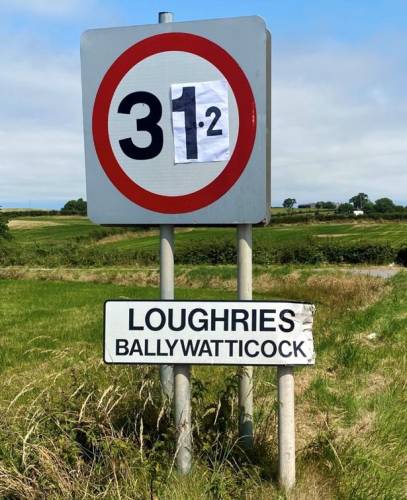 A 30mph road side in Ballywatticock in Co Down has been adapted after the highest ever temperature in Northern Ireland of 31.2 degrees was recorded in the area by the Met Office on Saturday
(Image: PA)

Meteorologists warned temperatures could reach 33C in the coming days, overtaking holiday destinations such as Marbella, Mykonos and Tenerife.

Thunderstorms are also forecast to bring up to 2.5in of rain in an hour. 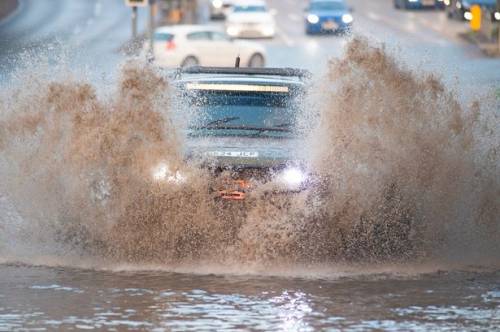 Two people are believed to have died from a heart attack and “heat stroke” and the drowning death toll reached 13 yesterday.

The catastrophe in western Germany and Belgium has claimed nearly 200 lives and hundreds are still missing.

Record rainfall caused rivers to burst banks and flood swathes of both countries as well as southern parts of the Netherlands and Switzerland.

Entire communities, some with buildings dating back to medieval times, were inundated. 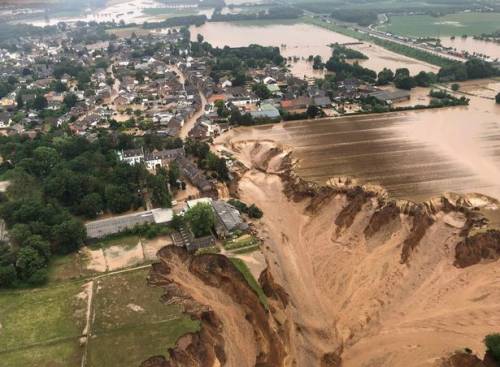 Rescue workers had to comb through the wreckage.

Some 17,150 houses in Belgium had no power over the weekend, roughly 30,000 had no access to drinking water.

About 3,500 homes had no gas and officials warned that a shortage of emergency supplies may last for several weeks.

New Zealand’s west coast was hit by severe flooding earlier this week, with a local state of emergency declared and thousands of residents evacuated from their homes.

The latest floods arrived in the aftermath of heavy rain and storms over the past two months that prompted states of emergency in Canterbury and Wellington. 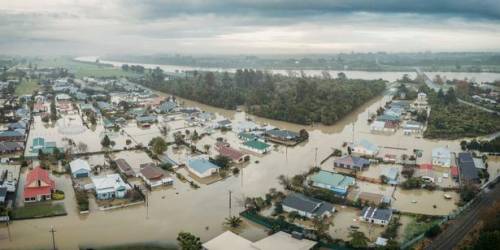 In parts of the west coast, nearly a foot of rain fell over a single weekend – around a month’s average rainfall concentrated into two days.

The heavy rain caused slips, rivers to break their banks, and more than 2,000 residents to be evacuated.

In the central province of Henan, at least 25 people have died in severe flooding caused by what meteorologists have called the heaviest rain in 1,000 years.

Nearly 8in pelted down in just one hour in the city of Zhengzhou, home to 10 million people. Some 20,000 residents have been evacuated.

In the subway system, where at least 12 of the confirmed deaths are thought to have occurred, waist-high water gushed through the tunnels, submerging platforms and filling carriages. 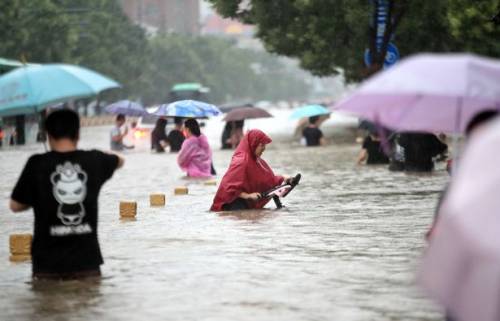 Video footage showed commuters trapped inside carriages holding on to handrails with water up to their chests.

Other clips show cars floating down the streets.

At least 35 people have died after buildings collapsed in landslides in Mumbai triggered by monsoon rains.

Heavy rainfall, described as “monstrous”, hammered down on India’s financial capital at the weekend. 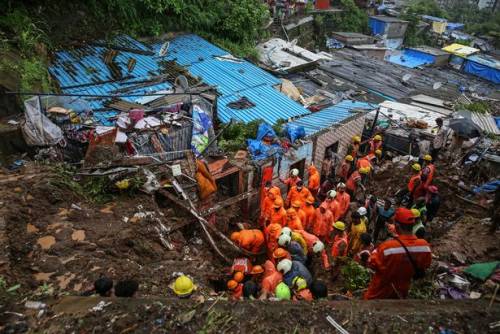 Rescuers in Chembur, Mumbai searching in the aftermath of a landslide
(Image: DIVYAKANT SOLANKI/EPA-EFE/REX/Shutterstock)

In the eastern suburb of Chembur, the collapse of a wall led to a landslide that destroyed homes as people were sleeping and killed at least 21.

Another 10 people were killed in the suburb of Vikhroli when a landslide hit several homes.

A heatwave in one of the world’s coldest regions has sparked forest fires, leaving the Siberian city of Yakutsk battling an ‘airpocalypse’ of thick, toxic smoke. 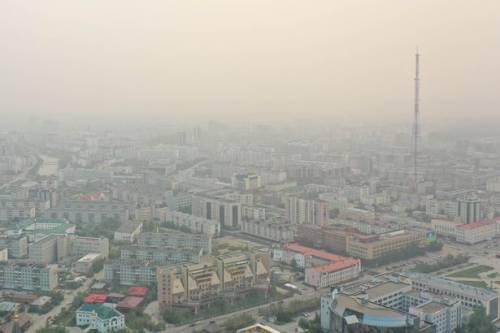 Local authorities have warned 320,000 residents to stay indoors to avoid choking on the fumes, likely to be one of the world’s worst ever pollution events.

An extreme heatwave has caused devastating wildfires in California, Utah and Western Canada.

On July 9 Death Valley in California equalled the 54.4C – the hottest reliably measured temperature in Earth’s history – recorded on August 16, 2020. 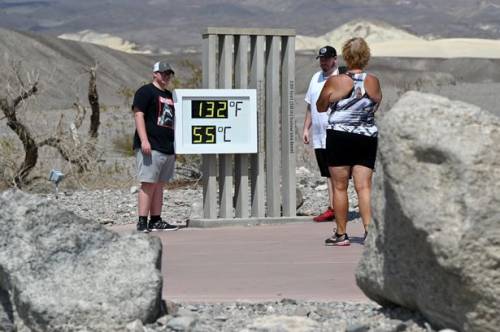 A heat dome that settled over western Canada and north-western US for five days earlier this month also pushed temperatures on the coast to 40C – shattering long standing records.

The unrelenting heat is believed to have killed up to 500 people in the Canadian province of British Columbia and contributed to the hundreds of wildfires currently burning.

Experts fear it has killed over a billion marine creatures. 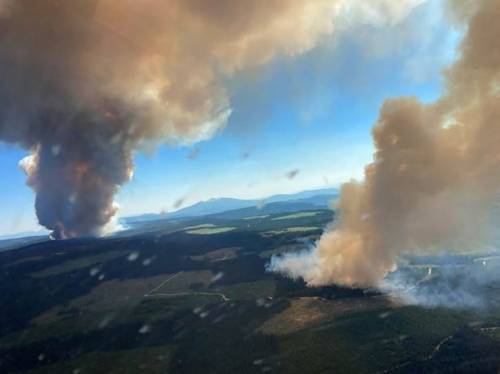 Scorched British Columbia as two plumes of smoke rise high from the Long Loch wildfire and the Derrickson Lake wildfire
(Image: BC Wildfire Service/AFP via Gett)

In the US state of Oregon, 80 forest fires, sparked by lightning from thunderstorms, have been devastating.

A blaze has burned an area roughly the size of Los Angeles, with more than 2,000 people forced to evacuate.

Southern Madagascar is enduring its worst drought in four decades, with more than 1.14 million people food-insecure.

Communities are on the edge of starvation.

Drawing attention to suffering families and people dying from severe hunger, the UN spelled out that “this is not because of war or conflict, this is because of climate change”. 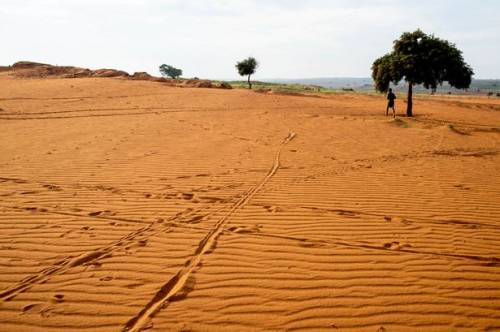 Those remaining barely survive by living on red cactus fruits, wild leaves and locusts for months.