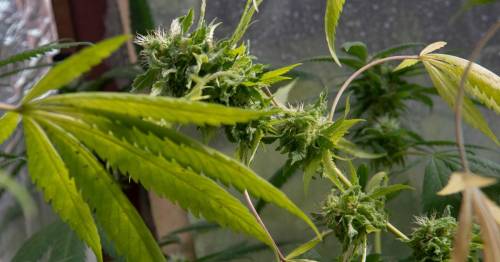 Compounds found in cannabis can prevent people being infected with Covid, scientists have said.

New research published by a team from Oregon State University suggests that two cannabinoid acids could block the virus from entering human cells.

It could pave the way for new treatments and a way of preventing the disease, experts hope.

However scientists have confirmed that smoking marijuana will not provide any protection.

A study, which was published by the Journal of Natural Products, found that cannabigerolic acid (CBGA) and cannabidiolic acid (CBDA) may bind to the spike protein – limiting its ability to do damage.

The compounds can be taken orally and are found in hemp, experts say.

Scientists say they tested whether the alpha and beta variants could be stopped from infecting an individual, and found they were.

But further research is needed to find out if it works against other strains of the virus.

Richard van Breemen, who led the study, said in a statement : "These cannabinoid acids are abundant in hemp and in many hemp extracts.

"They are not controlled substances like THC, the psychoactive ingredient in marijuana, and have a good safety profile in humans.

The latest research was published this week
(

The scientist said that the approach could also shorten the illness of those who have been infected.

His statement continued: “Any part of the infection and replication cycle is a potential target for antiviral intervention, and the connection of the spike protein’s receptor binding domain to the human cell surface receptor ACE2 is a critical step in that cycle.

“That means cell entry inhibitors, like the acids from hemp, could be used to prevent SARS-CoV-2 infection and also to shorten infections by preventing virus particles from infecting human cells. They bind to the spike proteins so those proteins can’t bind to the ACE2 enzyme, which is abundant on the outer membrane of endothelial cells in the lungs and other organs.”