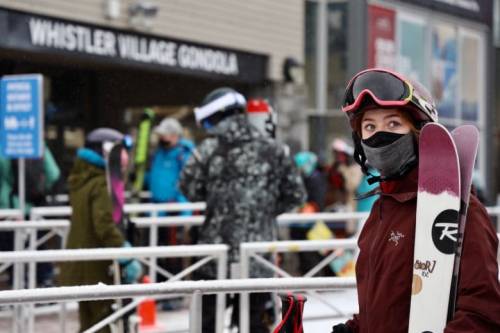 The Whistler Blackomb ski hills are open for the ski season as the resort municipality braces for two storm systems and potential supply chain crunches.

As much as 20 centimetres of snow is expected atop the mountains for opening day. A special weather statement from Environment Canada says wet snow in the Sea to Sky region north of Squamish will change to moderate to heavy rain before ending Thursday night, and it could impact already vulnerable landscapes and infrastructure.

Jennifer Smith, senior manager of Vail Resorts Pacific Northwest, says while snow conditions are favourable for skiers, ongoing flood challenges make it hard to predict just how busy it will be.

"Obviously, we're very conscious of everything that's happening within the province," she said. "For those who it's appropriate to come, we're excited to have them up."

It's also the second year in a row the ski season will open amidst the COVID-19 pandemic, but this time around the resort is opening its doors for bigger crowds. Guests will not need a reservation to ski or ride — measures that were put into place last year to limit capacity and maintain physical distancing in an effort to curb virus transmission.

Whistler Blackomb will not require a vaccine card for lift passes. However, people will need to present credentials if dining indoors. (Tina Lovgreen/CBC)

Vaccine cards are not required to ride gondolas. B.C. does not require proof of vaccination for outdoor activities including ski-hills, although some hills have opted to introduce them anyways.

Some residents have petitioned to make vaccines mandatory for hill-goers.

What could make for powdery conditions atop the mountain has prompted weather warnings for people living in the community.

As the hills open up, the Resort Municipality of Whistler is urging residents to be prepared for storm systems hitting the Sea to Sky region, with residents urged to clear ditches and driveway culverts to stop any potential flooding.

Sandbagging stations were made available to residents on Wednesday.

Earlir this year, the B.C. government ordered Whistler-Blackcomb ski resort closed until April 19 to halt the spread of COVID-19 amid a spike in cases. (Eric Foss/CBC)

And like many parts of the province, the area is also dealing with flood-induced supply challenges.

Some gas stations in the Sea to Sky region have reported dry pumps. B.C.'s 30-litre gas limit for non-essential vehicles applies to the area.

"The main problem we're seeing right now is fuel," said Eric Griffith, owner of Alta Bistro in Whistler Village and chariman of the Restaurant Association of Whistler. "Pemberton's out of gas, Squamish.  We've got some employees that commute, and that's thrown us a bit of a wrench."

When asked if there were any concerns over possible fuel shortages in the Sea to Sky region as visitors from the Lower Mainland and beyond make their way to the mountains for opening day, B.C. Public Safety Minister Mike Farnworth doubled down on calls for people to stay home.

"People should avoid all unnecessary travel," he said at a flood update on Wednesday. "If you don't have to travel, don't travel."

Fallen trees and debris are pictured on Monday, Nov. 15, after a flood swept through the area near Lillooet, B.C. (B.C. Ministry of Transportation/Reuters)

Provincial orders prohibiting non-essential travel apply to flood-damaged routes. The highway between Lillooet and Pemberton, which was previously closed due to a landslide, is now open for essential travel only and only for smaller vehicles. Officials say nothing larger than a cube truck can travel that road at the moment.

With work to restore supply chains and limits on gas, the public safety minister said he expects supply challenges in the area will be minimal.

A worker at The Whistler Grocery Store told CBC News it has managed to avoid any supply shortages by tapping into its back stock, but anticipates that once visitor traffic increases it could begin to run short on some items.

Griffith said panic buying hasn't seemed to take over shopping habits in the community, but he did say restaurant owners have noticed the odd supply gaps for certain items.

"Especially stuff coming from the East Coast … some of the proteins are just getting delayed," he said.

He said any supply challenges could be offset by a potentially slower than usual start, noting some hotels are reporting more vacancies than in years past, likely because of how storms and flooding have impacted travel. 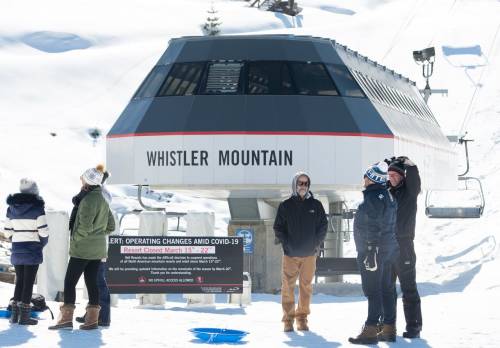 Tourists are pictured at the base of Whistler Mountain in Whistler, B.C. Sunday, March 15, 2020. (Jonathan Hayward/The Canadian Press)

"I think some of the Washington state people have just cancelled last minute because they're worried about this weather event coming through. People don't want to get stuck places. They want to just stay put," he said.

"With a little drop in business and a few shortages, it's probably going to be OK," he said.