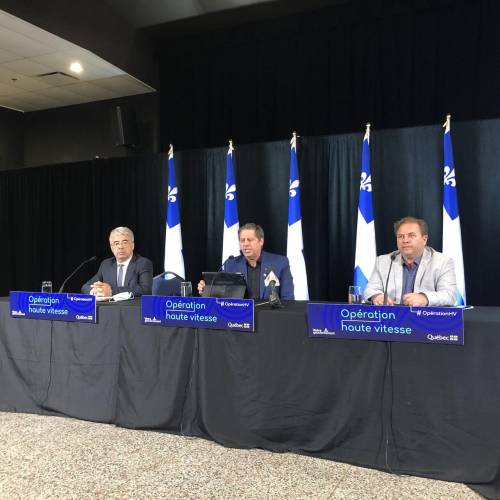 When it comes to internet management, Carolyn Roberts and her husband have a routine.

When both of them are home, neither one of them can do a video call. If one has an online meeting, the other tries to jump offline. All this, while being at the whim of the weather: if a tree's leaves get in the way or if a heavy snowfall hits in the winter, the connection could fizzle out entirely.

"It's just become a habit for us," Roberts told CBC's Quebec AM. "But it's not a good way to work."

The couple, who live in Mille-Isles, Que., have had spotty internet ever since they built their home in the Laurentians 19 years ago. Roberts said that back then, they were told that high-speed internet would be coming that summer.

Now, she has a pole about nine metres high sticking out of the roof of her house that needs to be adjusted every year, depending on how the trees grew. "It all depends on your valleys and your mountains and your dips," she said.

Still, Roberts considers herself one of the lucky ones. Many in the Laurentians do not have internet at all.

About 180,000 to 190,000 households in Quebec still do not have an internet connection, but the Coalition Avenir Québec government said that's about to change.

The province announced Monday that all Quebecers who want it will be able to connect to high-speed internet by Sept. 30.

$1.3B to connect the province

During the last provincial election in 2018, Premier François Legault had promised to have every Quebecer connected in his first mandate. The Sept. 30 date comes mere days before the next election, on Oct. 3.

Radio-Canada estimates that about $1.3 billion was spent in recent years to connect just under 250,000 households across the province, including about $450 million from the federal government.

Large sums were sometimes spent on a single case. Radio-Canada cites customers connected individually at high prices, with the cost frequently exceeding $10,000 per residence, and sometimes $25,000 to connect a single customer.

Orford MNA Gilles Bélanger (centre) announced that high-speed internet will be available to every Quebecer by Sept. 30 on Monday. (Radio-Canada)

About 10,000 households that still cannot be connected will be offered satellite internet through Elon Musk's Starlink service, the government said Monday.

Chloée Allary, who works as the community development coordinator for 4Korners, a charitable organization in the region that helps people access programs and services, said it's been a long time coming.

"[People] can't download or really stream or look at anything. They can't Zoom with their families," she said. "People that are very rural, that are more up north, they really just don't have internet. And they struggle."

During the pandemic, Allary said there were seniors who couldn't see their doctors in person and were told to video call them, but couldn't. A lack of internet also contributed to their isolation, she said.

Allary fears it's also hindering the development of the area. Remote workers, eager to leave the city, might not choose the Laurentians if they can't find reliable service, she said.

Roberts, who works at the local Sir Wilfred Laurier School Board, said it also made schooling in the pandemic difficult. Like in her own home, often students couldn't be using the internet at the same time as their parents, who needed it for work.

When asked how she feels about the idea of having reliable internet by the end of September, Roberts said that after nearly 20 years of promises, she won't hold her breath.

Still, she thinks it's money well-spent.

With files from Radio-Canada, Quebec AM and CBC's Lauren McCallum