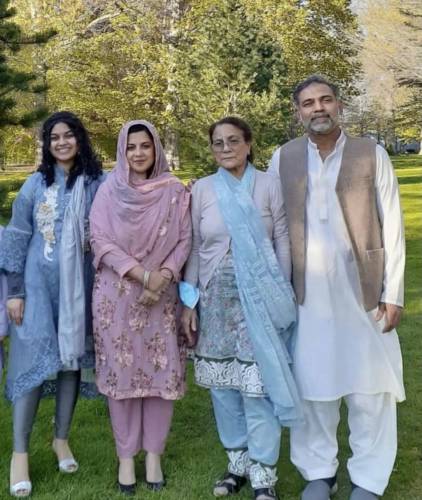 The federal government is set to host a national summit on Islamophobia today, one day after holding a similar summit on antisemitism.

MPs voted unanimously in favour of a motion calling for a national summit on Islamophobia in June, following the attack in London, Ont., that killed four members of a Muslim family as they were out for an evening walk.

During a press conference Tuesday, Prime Minister Justin Trudeau was asked about eruptions of Islamophobia in Canada — including a more recent incident in Hamilton, Ont.

Trudeau spoke about today's summit but said it's up to all Canadians to fight "intolerance".

CEO of the National Council of Canadian Muslims (NCCM) Mustafa Farooq said he wants to see all levels of government follow up today's summit with a concrete plan of action.

"The reality is we cannot just keep adding onto a list of horrifying things that have happened," he said, citing the recent spike in hate crimes.

Yumna Afzaal, 15, left, Madiha Salman, 44, centre left, Talat Afzaal, 74, and Salman Afzaal, 46, right, were out for an evening walk in London, Ont., when they were run over by a man who police say was motivated by anti-Muslim hate. (Submitted by Afzaal family)

Earlier this week, Farooq and the NCCM released 60 policy recommendations to combat hate and racism across the country.

The recommendations include Criminal Code amendments to better deal with hate crimes, a review of school programming and a national fund for victims of Islamophobia.

'This is about survival'

Farooq said he hopes the government will commit to these recommendations and follow up with timelines to achieve them.

"This is not about politics or an election," he said. "For our community, this is about survival."

Today's summit will be held virtually. The government has said it will include leaders of Muslim communities but it hasn't released a full list of participants.

The event will be mostly closed to the public — a measure to ensure the safety of those participating, the government said. Opening remarks set to take place at noon will be open to media and the public.

NDP leader Jagmeet Singh said Wednesday that while the summit was a good idea, the Liberals have been slow to act against the rise in Islamophobia and other racist ideologies.

"There are a number of solutions that we have known about for years, and, sadly, Mr. Trudeau has not responded, has not taken action," he said.

Singh said the Liberals should put more effort into tackling online hate and give more resources to police and security agencies to dismantle white supremacist groups.

In February, a month after the attack on the U.S. Capitol, Public Safety Minister Bill Blair announced that a number of "ideologically motivated violent extremist groups" — including the Proud Boys — were being added to Canada's list of terrorist organizations.

But a recent report suggests those efforts haven't prevented groups like the Proud Boys from operating openly online.

The same day that MPs voted to hold a summit on Islamophobia, the government announced it would also host a summit on antisemitism, which was held Wednesday.

In a media statement earlier this month, Minister of Diversity, Inclusion and Youth Bardish Chagger said she invited various cabinet ministers and members of Parliament to join the discussion on antisemitism.

But opposition leaders said they didn't receive invitations to the antisemitism summit until the very last minute.

Green Party leader Annamie Paul tweeted Tuesday evening that she hadn't received an invitation despite being the only federal leader who is Jewish.

Paul later tweeted early Wednesday afternoon that she had received an invitation to observe the summit only hours before the event was set to start. She said she had wanted to address the summit.

The government just sent a link for today's Antisemitism Summit. I can observe, but I can't speak. Reason: "to ensure the summit remains a space where community members can express their opinions &amp; ideas". <br><br>I am Jewish. This is my community. <a href="https://twitter.com/hashtag/cdnpoli?src=hash&amp;ref_src=twsrc%5Etfw">#cdnpoli</a>

Conservative leader Erin O'Toole's office said he wasn't initially invited to Wednesday's summit, or to the one being held today on Islamophobia, despite asking the government for an opportunity to speak.

"Mr. O'Toole received an invitation at 7:15 pm last evening to watch the summit but despite repeated requests from stakeholders and our office, we are not part of the event," said spokesperson Josie Sabatino.

A member of O'Toole's office told CBC on background that the party's critic for diversity and inclusion would attend the entire antisemitism summit. 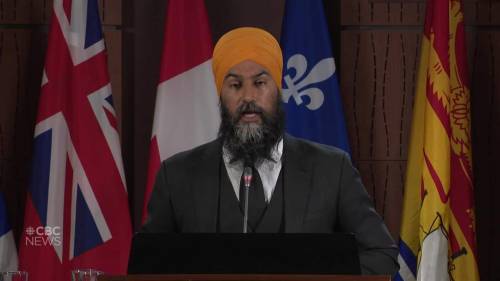 NDP Leader Jagmeet Singh says his critic was invited to the antisemitism summit.

14 hours ago0:50Singh says the invitation to the national antisemitism summit launched by the federal government was extended to his party's critic. 0:50

The NDP sent its critic, Lindsay Mathyssen, to attend the antisemitism summit. During his press conference on Wednesday, Singh said he was looking forward to getting feedback from Mathyssen.

"We know hate is very much like a fire … it's not isolated, it will spread, it will consume everyone. So we've all got a collective responsibility to listen to people impacted," Singh told a press conference on Wednesday.

Opposition leaders have been invited to the summit on Islamophobia, said Chagger's office.

The next call for applications will be launched on July 28.

Previous : Wondering what it’s like at the Tokyo Olympics? Ask us your questions
Next : Wally the Walrus struggles in heat as Brits warned disturbing him is criminal offence