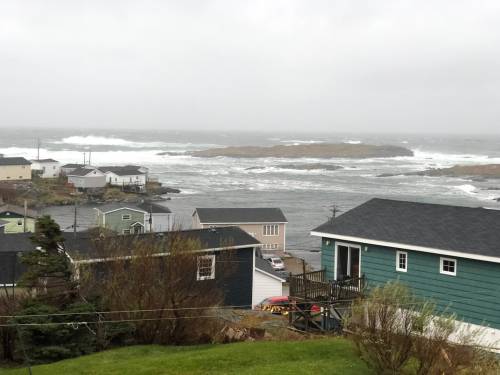 A severe rainstorm is bearing down on south western Newfoundland. (Peter Cowan/CBC)

A severe rainstorm is beginning to move over southwestern Newfoundland, in what meteorologists are predicting will be an "unprecedented" weather event.

"For me, this is my first time seeing a rainstorm like this. It's almost eerily similar to kind of what happened to B.C. just a few weeks ago, with the atmospheric river just pumping lots of moisture into the air," said Veronica Sullivan of Environment Canada's weather office in Gander.

"I don't think we'll see as bad an impact here as what happened in B.C., but still it's going to be something to watch and it's going to break a lot of weather records."

Sullivan said the Port aux Basques area can expect 150 to 200 millimetres of rain on Tuesday, and in areas with higher terrain, more than 300 mm is expected.

She said some weather models suggest the rain total could even reach 400 mm in high-elevation areas, and while  the actual rainfall may be much less, the water will flow downwards from the mountain areas, and could significantly affect water levels below.

"It's going to be something to watch. Torrential rain, really gusty winds. It's really not going to be a good time to be travelling down there," Sullivan told CBC Radio's St. John's Morning Show.

"[It's] very likely that there will be some washouts and localized flooding."

Wind in the Wreckhouse area is expected to reach 150 km/h throughout Tuesday and 160 km/h in the night. The wind is expected to diminish overnight, but is predicted to pick up again Wednesday morning.

But strong wind isn't going to be unique to the Wreckhouse, Sullivan said. She said the entire west coast of the island will feel strong gusts.

Preparing for the storm

Port aux Basques Mayor Brian Button said he realized on Sunday the storm will require a lot of attention, and sent an email to council members.

"It's been pretty much since that time we've been trying to prepare," he said.

Town workers have been checking storm drains and potential impact areas. The town has also checked in with fire and police services to make sure everyone is prepared, Button said. 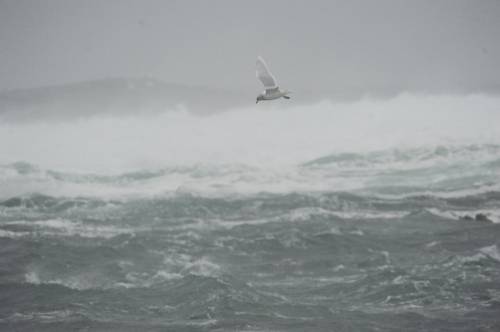 Heavy seas are picking up off the coast of southwestern Newfoundland. (Troy Turner/CBC)

Low-lying areas throughout Port aux Basques are the greatest concern for the community, said Button, but the strong wind and the sheer amount of rain on the way have put the entire town on notice.

"Let's take every precaution that we can. If they have trouble, by all means call it in. Try to get ahold of town hall or someone within the town, myself, whoever," he said.

"There's probably going to be a high volume of calls. So you can expect delays of us being able to get there, or get back to them. It could be a very frustrating couple of days for people."

With files from the St. John's Morning Show