Thunder Bay’s brewing industry is booming, but can it support 5 breweries?

The Lakehead Beer company opened its doors to customers in the north core of the city, last week. It's the fifth craft brewery in the northwestern Ontario city of about 110,000 people.

Still, it's welcome news to the city's other, more established brewers.

"If people want to look and say, 'Oooh, you got more competition', I don't think that's true." said Kevin Brewer. "I think now you have more variety for the consumer and they can try a beer from a different craft brewery."

Brewer is the general manager of the Sleeping Giant Brewing Company, the oldest and largest of the craft beer makers in the city.

He said he welcomes the competition and believes it should be good for all the other local craft beer companies including One Time, Dawson Trail and the Prospector.

Sleeping Giant has been in business for nearly a decade and has 15 full time employees. Yet he said there are still people that walk through the doors and say they didn't know there was a brewery in Thunder Bay, Brewer explained.

"When I've gone to a city and I only have so many hours in a day, I want to see as many breweries as I can," he said.

"And now there are five options for visiting people who come to Thunder Bay. That's two days that you could spend trying, sampling, educating yourself or just enjoying Thunder Bay as a whole," he said.

"You could buy their beer and then go hiking on the Sleeping Giant as well, or any of the numerous trails."

Across Canada, craft breweries are a major employer, with about 1,100 breweries employing 10,000 people. According to the Conference Board of Canada 79 per cent opened within the last six years, since 2015.

The past year has been particulary hard on those smallest firms, which are just getting started. Still, in Thunder Bay brewers are looking toward the future.

Kerry Berlinquette has been one of the key players in the growth of the craft beer scene in Thunder Bay. She helped found the craft beer festival called Brew Ha, as well as the Sleeping Giant Brewing Company and the Breakwater Taphouse. (photo: Gord Ellis/CBC )

Kerry Berlinquette knows more about Thunder Bay's craft beer scene — and its tourism potential — than just about anyone.

Berlinquette has been a key player in all aspects of Thunder Bay beer, from owning a tap house to being one of the originators of the city's Brew Ha craft beer festival. Berlinquette said she believes five craft breweries can survive in Thunder Bay, because it is the kind of place that supports its own. 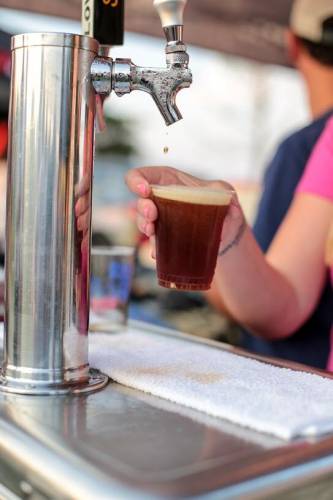 Thunder Bay 's annual Brew Ha festival was co-founded by Kerry Berlinquette and has proven to be a popular attraction for craft beer lovers. (BrewHa! festival)

"I'm a true believer that Thunder Bay loves anything that is locally made here," she said. "We have a real pride in our city and anything that people start here. I find that the local folks really try to support it and not just Thunder Bay, but northern Ontario, northwestern Ontario"

Berlinquette said she believes that having different craft brewers also helps people expand their palate She says craft breweries can offer unique beers that may appeal to people who don't normally enjoy beer.

"Every time something new opens, they bring new beer drinkers into the mix," she said. "And beers are changing all the time," she said.

She says craft breweries can offer products, like sours, that appeal to people who don't really like the taste of beer.

Like Brewer, Berlinquette said she foresees a day when brewery tours will be a big attraction in the city. She said a lot of it hangs on a "return to normal" and the possibility of cruise ships coming into the harbour.

"There are so many opportunities here, like you visit a brewery and then maybe a local restaurant that serves the beer," she said. "I can see all these things."