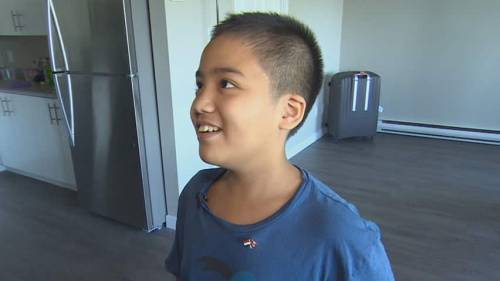 This Waterloo, Ont., brainiac just got his master’s degree in physics at 17

Cendikiawan Suryaatmadja may not be able to legally buy a lottery ticket or vote yet, but the 17-year-old University of Waterloo whiz has already completed his master's degree in physics.

"It feels good. I am very proud of it," he humbly shared.

Suryaatmadja, originally from West Java, Indonesia, came to the Ontario city when he was 12 to kickstart his post-secondary journey.

By 16, he had successfully completed a bachelor's degree in mathematical physics with a minor in pure mathematics.

Next month, he'll attend his master's degree graduation ceremony, as one of the three youngest master's grads in the history of the university. The other two were even younger than him.

"I hope that by doing this, I could encourage all the younger people out there to really strive up to their potential," he said.

Next fall — you guessed it — Suryaatmadja plans to pursue a PhD in physics, specializing in quantum information.

How did he do it?

"I really loved math at a young age," Suryaatmadja said.

Ever since he could remember, he said, he would buy handfuls of educational books and math comics. He joined many math competitions and before he knew it, he had fast tracked through high school and was ready for further education.

Suryaatmadja said his university experience has been "fun."

"Although my stature may be a bit unconventional, I don't think I have a particularly hard time making friends," he said, referring to how young he looks.

Socializing was pretty easy, he said, because people were welcoming and there was no shortage of school clubs to join.

WATCH | Cendikiawan Suryaatmadja, then 12, speaks about his goals even at that young age:

6 years agoDuration 2:15Boy from Indonesia is studying chemistry, math and economics at the University of Waterloo

Suryaatmadja said some people were shocked when they found out how old he was, but others not so much.

"I think it's because I look quite young," he said. "I don't think I'm treated any more special than other students. I'm glad that that's the case."

When he's not studying, in class or at improv club, Suryaatmadja is out grabbing bubble tea with friends, watching TV or jogging.

The only thing he still gets hung up on is Canada's fickle weather.

"I'll be honest. The weather can get a bit annoying. There's just so much transition: Winter to spring, spring to summer, summer to fall."Cendikiawan Suryaatmadja

'Be what you want'

As you can imagine, Suryaatmadja's teachers and administration take pride in his accomplishments.

"What [Suryaatmadja] has done is truly remarkable. Having the academic skills and personal drive to finish his master's at his age reflects a level of accomplishment that is incredibly rare,"  said Jeff Casello, associate vice-president graduate studies and postdoctoral affairs, in an emailed statement.

"I think all of us in the graduate community feel a sense of pride that he's chosen to study with us, and that we have played a small role in his success."

Suryaatmadja insists age is nothing but a number, and hopes to encourage other young people to chase their dreams no matter how old they are.

"For all the younger people out there, if you are really interested in something and you think it could help a lot of people, don't be intimidated just because the people are doing the same thing are much older than you." he said

"I think that you could be what you want, and the only thing that's limiting you is yourself."