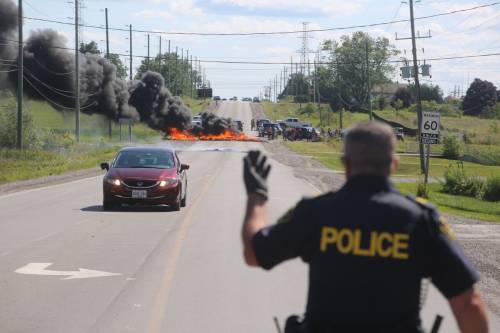 The head of the statue of Egerton Ryerson now on a spike at Land Back Lane in Caledonia, Ont.

Last seen decapitated from a statue on the Ryerson University campus in Toronto, the head of Egerton Ryerson has made its way to 1492 Land Back Lane in Caledonia, Ont.

The area is the subject of an ongoing land battle between the Six Nations of the Grand River and local developers, who are attempting to build residential housing on land that the Six Nations say was never ceded by the Haudenosaunee.

Williams said he doesn't know how it got to the site, but they'll keep it unless someone else "is wanting to take it on tour."

Ryerson was one of the architects of Canada's residential school system, which separated 150,000 Indigenous children from their families until the last one closed in 1996.

"It'll stay in its spot on the hill for the foreseeable future," he said about the statue head.

The statue was toppled and beheaded on Sunday by demonstrators on the Ryerson University campus after the remains of an estimated 215 Indigenous children were detected on the site of a former residential school in Kamloops, B.C.

Ryerson was the chief superintendent of education in Upper Canada (now modern-day Ontario). In 2010, Ryerson University's Aboriginal Education Council found "although [Ryerson] did not implement or oversee the launch of the schools, he contributed to the blueprint of them."

Williams said that, for him, statues of colonial figures like Ryerson are "iconic symbols about the genocide of our people" and "akin to having a statue of Hitler in the middle of Times Square."

Williams said three white pine saplings have been planted on the site of 1492 Land Back Lane as a way to memorialize the children.

"I don't think that anybody was surprised in the Indigenous community," he said of the remains buried at the former B.C., residential school. "We've been saying this now for 50 years, at least, that there are thousands of kids who never came home from those schools."

Williams told the CBC that he sees a direct link between their struggle to win back the land and the legacy of residential schools.

"There is a very direct tie between the land-back movement and the residential schools," said Williams, along with the Sixties Scoop, missing and murdered Indigenous women and girls, and what he calls the Millennium Scoop — the disproportionate levels Indigenous children are separated from their parents by Canada's child welfare systems.

An Ontario Provincial Police officer guides a car past the blockade on Argyle Street, south of Caledonia, last summer. The area is the subject of an ongoing land battle between the Six Nations of the Grand River and local developers. (Dan Taekema/CBC)

The demonstrators have stayed on the land for more than 300 days. There have since been blockades across roads in the area, court injunctions to remove the people staying there and dozens of arrests.

Williams turned himself in to police on May 19 after he was charged with two counts each of mischief and disobeying a court order, as well as intimidation and failing to comply with an undertaking.

"You're going to continue to see people doing exactly what we've done here if there isn't some radical change within government, and the way we are policing, and the way we are continuing to discriminate against Indigenous people making a stand for lands that are rightfully theirs."

Statue won't be restored or replaced

More than 1,000 people took part in an afternoon protest on Sunday to topple the Ryerson statue outside the university.

After it had fallen, Ryerson University president Mohamed Lachemi said in a statement it "will not be restored or replaced."

Following the Kamloops discovery, Indigenous students at the university also called on students, faculty and alumni to stop using the name Ryerson in their email signatures, correspondence, and on their resumés, urging them instead to call the school X University.

Two publications associated with Ryerson's journalism school — the Ryersonian newspaper and the Ryerson Review of Journalism magazine — also say they will change their names.

Support is available for anyone affected by their experience at residential schools and those triggered by the latest reports.

A national Indian Residential School Crisis Line has been set up to provide support for former students and those affected. People can access emotional and crisis referral services by calling the 24-hour national crisis line: 1-866-925-4419

Previous : Bad news for fishing: Climate change is sucking the oxygen out of lakes, study suggests
Next : Montez Sweat ‘not a fan’ of COVID-19 vaccine despite Washington Football Team bringing in expert to address players