"[It's] a historic day for the Stratford Festival, one that has been years in the making with a few interruptions along the way," said artistic director Antoni Cimolino during a ribbon-cutting ceremony on Tuesday.

In 2018, the facility — a former curling rink-turned-theatre — underwent a $72-million demolition and reconstruction, a project completed in 2020. However, as a result of the COVID-19 pandemic's health and safety measures, the theatre's reopening was delayed until this week.

The Tom Patterson Theatre at the Stratford Festival reopened to the public with a ribbon-cutting event Tuesday morning. (Hala Ghonaim/CBC)

On Tuesday, the theatre marked its reopening with a ribbon-cutting ceremony followed by its very first public performance of Richard III.

At first glance, it's hard to miss the new theatre's floor-to-ceiling glass windows that wrap the entire facility overlooking the Avon River. Upon entering, the lobby space is decorated in pale, yellow brick walls with wooden floors and ceilings.

The Lazaridis Hall at the Tom Patterson Theatre where there's space for members of the public and theatre to gather for various functions. (Hala Ghonaim/CBC)

"What we added … was spaces for people to gather before and after the shows … to have a space where people could go to forum events, which is our lectures, and debates, and panel discussions, and concerts, and comedy nights and everything from a morning film screening to a late-night comedy event," she said.

The former facility was essentially an auditorium with a small lobby space, with fewer production features, gathering spaces and amenities.

The transformed auditorium, which can seat up to 700 people, has additional rows, comfortable seating, accessible aisles, and upscale production and lighting equipment. One of the more striking distinctive features maintained from the previous facility is its long thrust stage, which extends into the audience for a more intimate interaction.

The upside to the reopening delay was additional time to work through logistics, said Gaffney.

The space was also used last season for front-of-house services and performances in the parking lot, since the Festival Theatre hosted an outdoor season. 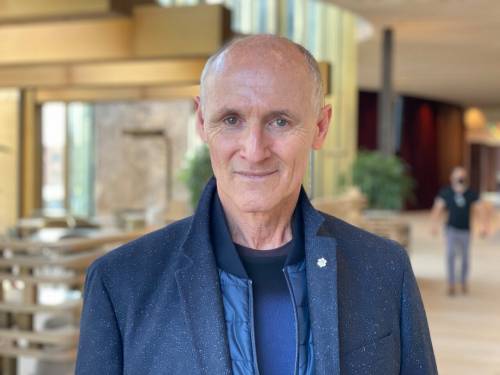 Colm Feore is in the starring role in Richard III. He was among several actors who took part in Tuesday's ribbon-cutting ceremony at the newly renovated theatre. (Hala Ghonaim/CBC)

In the meantime, eager actors waiting for the grand debut used the theatre's rehearsal space.

"We'd been on this for a long, long time, and then to just go into suspended animation was super weird," recalled Colm Feore, who's starring in the title role in Richard III. "Now, we're ready, finally."

It's been designed to be closer so we can be gentler, quieter, more intimate.- Colm Feore, actor, on the Tom Patterson Theatre makeover

Feore said the key experience in the transformed theatre will be the intimate actor-to-audience relationship.

"It's been designed to be closer so we can be gentler, quieter, more intimate," he said. "The sight lines are going to be much better. The distance between an audience and an actor standing in the middle of the stage is less."

"It gives you an enormous amount of flexibility creatively, and I think that the audience will be able to tell the difference," he said.

"[It] has improvements in a lot of ways to help with sound, and the opportunities for magic inside of this space are a little bit more greater than what we had beforehand," added Andre Sills, who plays the Duke of Buckingham in Richard III.

Hundreds of people from across the region eager to be among the first audience members attended the preview on Tuesday.

John McCarroll and his wife have been waiting for this moment for two years, since they had tickets for the original grand opening, which had been postponed. 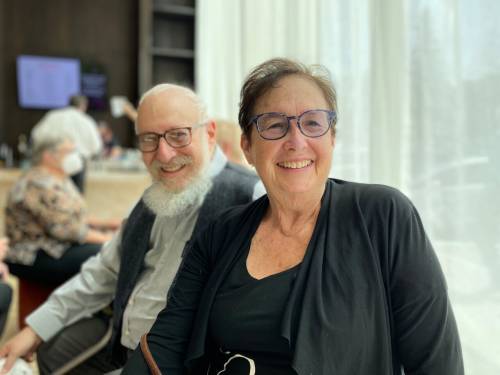 Marcia Glick and Bernie Glick drove from Waterloo to Stratford to watch the first public preview at the Ontario theatre. (Hala Ghonaim/CBC)

"It was a charming space as it was, but this has been custom built for the whole experience … of theatre in Stratford," he said. "It's just fabulous. The space is really exciting and the way they've interpreted this production is just brilliant."

Marcia and Bernie Glick have already secured tickets to almost 10 shows this upcoming season, which opens in June.

"We miss this and it's nice to have it back," said Bernie. "This is what good theatre is all about."

"It's beautiful," added Marcia. "All the seats are very comfortable and there's good sight lines throughout the theatre.

"I would say there is not one bad seat in this house, and also the acoustics are fantastic. I can really notice the difference," she added.

"It's more intimate … I would say there's no bad seats in the house," echoed Kelly Baker.

"My behind is loving it. The seats are fabulous," Baker joked. "It's come out so well."

The Spriet Members' Lounge offers a space for theatre members to gather before performances. (Hala Ghonaim/CBC)

Both federal and provincial governments each poured $20 million into the theatre's transformation. People with past and current links to the festival donated an additional $25 million.

The theatre's fundraiser, Spirit of the Tent Campaign, surpassed its goal of $100 million by about $5 million, officials announced on Tuesday. The remaining money will be used for operational and maintenance fees.