Storm washes away areas of Trans-Canada Highway in southwestern Newfoundland

A culvert between Doyles and South Branch is completely wiped out. (Submitted by Carl Bissonnette)

The Department of Transportation is reporting multiple washed out roads in the Codroy Valley area, including two parts of the Trans-Canada Highway near Doyles, after a rainstorm pummelled Newfoundland's southwest coast overnight.

The storm has already dropped 93 millimetres in Port aux Basques as of 6:30 a.m. NT Wednesday, according to Rodney Barney, a meteorologist with Environment Canada's weather officer in Gander.

"Further up the Codroy Valley we have a report of 125 millimetres," Barney said, adding that he suspects much higher amounts of rain fell over the mountains.

Barney said the rain should intensify early Wednesday morning, as meteorologists expect the system to bring 150 to 200 millimetres of rain to the area in total.

"It looks like through the morning hours is probably when the heaviest part of the shower activity will be occurring for today, then gradually winding down as we go into the afternoon and evening."

Winds gusted in excess of 130 km/h in the Wreckhouse area, but have diminished slightly Wednesday morning reaching about 90 km/h, Barney said. He said the wind is expected to pick up again later Wednesday morning.

The brunt of the rainfall is confined to the southwest corner of the island, meaning the Port aux Basques area and as far east as La Poile can anticipate the storm to continue to soak the communities.

In a news release, the RCMP said Department of Transportation crews were working in the Codroy Valley areas to assess the damage. 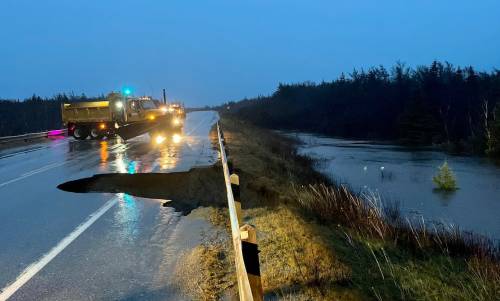 Areas of the Trans-Canada Highway near Doyles and the Codroy Valley are washed away due to the storm. (Troy Turner/CBC)

'All I could hear was pavement cracking'

Ryan Moore, who lives in Doyles, was driving along a stretch of roadway Tuesday night when the asphalt beneath his truck gave way.

"I was kind of in shock. [The] airbags and everything went off and I jumped out," he said.

"I looked behind me and there was just a black hole behind me … all I could hear was pavement cracking, it was pitch black so I couldn't really see what was going on."

Moore said he had actually sold that truck earlier in the day. Now it's a total write off. 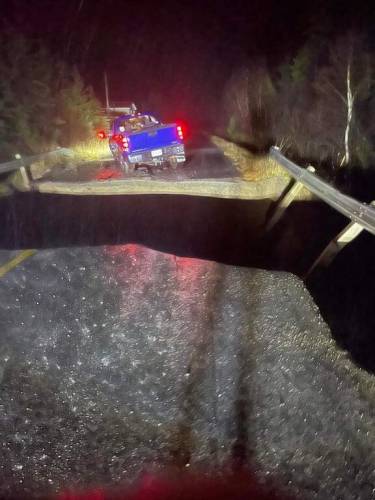 Ryan Moore was driving his truck along a stretch of road near Doyles when the asphalt beneath him crumbled. (Submitted by Ryan Moore)

He said he nearly made it across the culvert when it caved in, his front wheel breaking through and bouncing the truck back onto hard ground on the other side.

"I've been driving that road my entire life and something didn't look right," he said.

Moore is safe. He used the phone from a nearby neighbour's house to call for a ride home. He said a tow truck should be able to remove his now abandoned vehicle from the road early Wednesday morning.