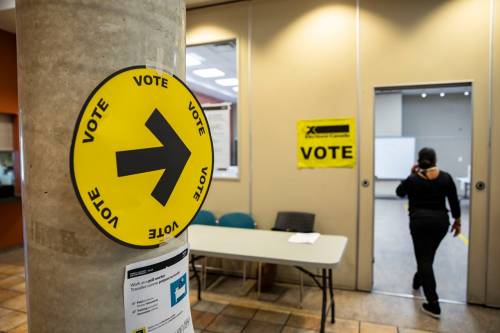 State actors could use blackmail, threats to influence voters, politicians in the next election, CSIS warns

Canada's spy agency says state actors may attempt to blackmail voters and pressure politicians in order to influence the outcome of the next election.

The warning is contained in a special report on foreign interference threats, which charts some of the tactics the Canadian Security Intelligence Service has observed over the years.

Its publication comes as Ottawa prepares for an election call widely expected in the next few weeks. That election, when it comes, is likely to see attempts at foreign interference online, the Communications Security Establishment has warned.

"CSIS has observed persistent and sophisticated state-sponsored threat activity targeting elections for many years now and continues to see a rise in its frequency and sophistication," notes the report.

"State actors may use threats, bribery or blackmail to affect the voting behaviour of individuals inside or outside of communities," says the report.

"Individuals may be threatened or fear reprisal for themselves or their loved ones in Canada or abroad if they fail to comply with publicly supporting a particular candidate or contributing funds to the foreign state's preferred party.

"While state actors may use coercive techniques to achieve their objectives, they may also use flattery, promise compensation, or appeal to an individual's sense of pride towards another country to elicit the desired behaviour."

CSIS said state actors might also attempt to get leverage on MPs and their staff through threats or more subtle tactics — such as romantic entanglements.

"These relationships enable the manipulation of targets when required, for example, through requests for inappropriate and special 'favours,'" warns CSIS.

"The individual may also be able to hinder or delay initiatives that are contrary to the foreign state's interest."

A state actor might also attempt to put an MP, candidate or political staffer into a compromising situation for blackmail purposes, says the report.

The agency is advising potential targets to be on the alert for unnatural social interactions, frequent requests to meet privately, out-of-place introductions or engagements, gifts or offers of all-expenses-paid travel.

The report says political donors, lobby groups, community organizations and the media could also be targets.

"For the candidate receiving the donations, there may be 'strings attached' and an expectation that the candidate will act in the state's best interests," says the report.

The report does not cite hostile state actors by name. CSIS director David Vigneault has gone on the record in the past naming China and Russia as the two main countries of concern when it comes to foreign interference.

The agency said it wanted to publish Thursday's report to alert Canadians to the threat.

"Although Canada's electoral system is strong, foreign interference is a significant threat to the integrity of our democratic institutions, political system, and fundamental rights and freedoms," it said.

The report comes after a busy year for CSIS. The agency said that 2020 saw the highest level of foreign espionage and foreign interference directed at Canadian targets since the end of the Cold War.