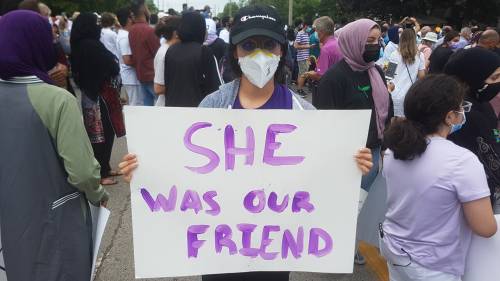 Fourteen-year-old Hateem Amin was determined to attend the outdoor vigil in London, Ont., to honour her 15-year old friend Yumna Afzaal and three family members who were run down and killed by a truck Sunday evening in what police say was a hate-motivated attack.

Gripping a sign that read: "She was our friend," Hateem was one of the thousands who blocked off part of Oxford Street — a main London thoroughfare — on a hot Tuesday evening to gather outside the London Muslim Mosque. They were joined by community, religious and political leaders, all there to show support for the Muslim community and call for action against Islamophobia and anti-Muslim hate.

"I'm so happy that this many people care about her and so many people are willing to share her story," Hateem said. "And I just want the world to know why she died."

Hateem Amin, 14, attends the outdoor vigil in London, Ont. to honour her 15-year old friend Yumna Afzaal and her three family members who were struck and killed by a truck in what police say was a hate-motivated attack. (Mark Gollom/CBC)

According to police, Yumna, along with her father Salman Afzaal, 46, his wife Madiha Salman, 44, and Salman's mother, Talat Afzaal, 74, were out for a walk when they were mowed down by a truck — killed in a hit and run attack, which police said specifically targeted the Muslim family.

To mark their tragic deaths, the crowd observed a moment of silence at 8:40 p.m., the same time in the evening the family was attacked.

The deaths have shocked this southwestern Ontario university city of a little over 400,000 people, where more than 30,000 Muslims live. Last year, the city, a hub for manufacturing, technology and medical research, recorded four murders in total.

While the vigil was in part a time to grieve the loss of the family, it also served as a reminder of how unsafe many Muslims feel in the community.

8 hours ago3:12Thousands gathered outside a London, Ont., mosque on Tuesday night to show support for the city's Muslim community and honour the lives of four family members who were killed on Sunday in what police said was a premeditated attack because of their faith. 3:12

Nusaiba Al-Azem, second vice-chair of the London Muslim Mosque, said she's walked along the street where the family was struck down.

"I've walked that trail that our London family walked on Sunday and never got to finish,"  Al-Azem told those gathered. "And just like many of my friends and family have expressed to each other and on social media, it's not a matter that it could have been me. It was one of us."

The sombre event drew people from all different communities, including many non-Muslims who held up signs that read: "We stand with our London family" and "Diversity is our strength."

Rania Lawendy, a council member of the Muslim Association of Canada, who has consoled students at the London Islamic School, where Yumna once attended, handed out purple and green ribbons to members of the crowd.

The purple represented Yumna's favourite colour. And the green is part of the Green Square Campaign, which takes place every year to represent the green carpets of the Quebec City mosque, where, in 2017 the victims of another deadly attack directed at Muslims, last stood to pray. The 2017 shooting left six dead and five injured.

Family and friends of the Afzaals, along with the first responders who tried to save the family, were invited to be the first to tie their ribbons to the mosque fence. (Evan Mitsui/CBC)

Family and friends of the deceased, along with the first responders who tried to save the family after they were attacked, were invited to be the first to tie their ribbons to the mosque fence.

"It's wonderful to see this type of support," Lawendy said about the thousands who had come out to support the vigil. 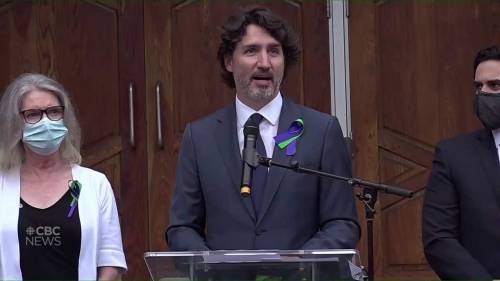 9 hours ago3:05Prime Minister Justin Trudeau addresses a crowd in London, Ont., Tuesday evening at a vigil in honour of the Muslim family killed in what police say was a premeditated attack. 3:05

Prime Minister Justin Trudeau was one of the many political leaders — of all political stripes — who came to London to speak at the vigil. Trudeau said there were no words to ease the grief of having three generations killed while they were out walking in their neighbourhood.

He said Canadians make a pact to look out for each other, but for the Muslim community, "that pact has been broken too many times."

Earlier in the day, a steady stream of people made their way to the scene of the attack, a mostly sparse intersection that has since been turned into a memorial for the family, where bouquets of flowers and teddy bears adorn the ground. 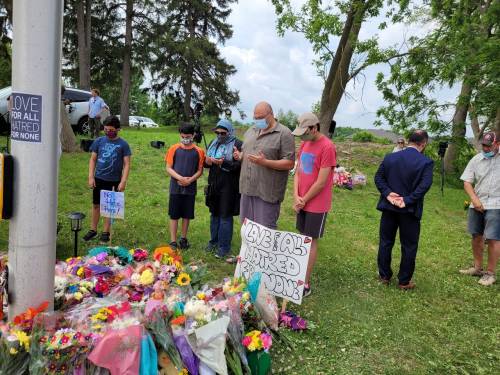 People pay respects at a makeshift memorial that sprung up at the intersection where the family was killed. (Mark Gollom/CBC)

Halema Khan, along with her three children, paid her respects to the Afzaals, whom she regarded as family.

"Just needed to see for myself this is real, that they're no longer among us," Khan said.

She last spoke with Mahida Salman two days before she was killed. Salman's last words to her friend were: 'Please keep my family in your prayers."