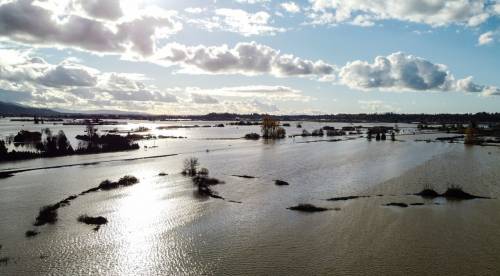 Severe impacts of flooding created by perfect storm of circumstances in southern B.C.

The atmospheric river that passed through B.C., last week, which caused severe flooding that destroyed homes and highways, was only one factor that led to such significant damage throughout the province.

A perfect storm of circumstances led to the devastation, and according to climate scientists, it's a combination we are likely to see more frequently, and more severely, in the future.

"The return period on this past event was over 100 years for many of these locations," said Armel Castellan, a warning preparedness meteorologist for Environment and Climate Change Canada.

"It's more than generational. It's like a lifetime event and then some, and I think that puts the perspective on what we are going to be facing going forward in the coming years and decades."

A study from Environment and Climate Change Canada published in 2020 found that climate change has made rainfall more extreme, and storms with extreme rainfall more frequent.

Castellan says that on average, B.C. can have up to 30 atmospheric rivers in a year, though smaller ones are actually beneficial to the ecosystem.

But when they're more intense, releasing more water and over longer periods of time, those systems become dangerous.

An aerial view of where the Trans-Canada Highway used to run through the Sumas flats in Abbotsford, B.C., covered in water, taken on Tuesday. (Gian Paolo Mendoza/CBC)

Add in the drought B.C., saw over the summer, wildfire activity shifting the soil this year and other recent years, and a thin snowpack melting on mountains, and you've got the right scenario for major flooding and landslides.

Other extreme weather has hit the province this year, including a heat dome that killed hundreds of people and led to an intense wildfire season, and a tornado that swirled near the University of British Columbia earlier this month.

"There were things conspiring against this event to create such a bad set of impacts that are continuing today," Castellan said.

On average, Vancouver sees about 185 millimetres of rain in November. Many parts of the region exceeded that amount in less than 48 hours last week, and more rain is in the forecast.

Annual floods of 'historic' proportions by end of century

Two years ago, climate change researcher Charles Curry co-wrote a paper suggesting extreme rainfall events would lead to peak annual floods of historic proportions by the end of 2100 in the Fraser River Basin.

"What the models tell us is sort of an overview or a kind of a probability of these events getting more frequent in the future," Curry said.

"But we just can't say so much about the exact timing of when they're going to occur."

That said, he was surprised by the intensity of this month's rainfall. 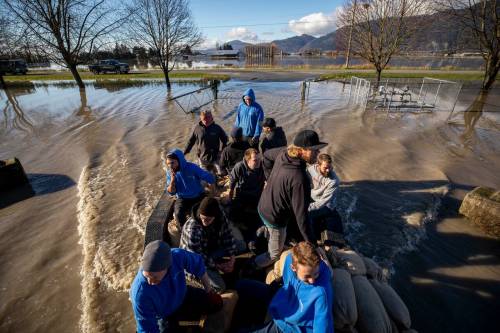 Volunteers from the community fill and deliver sandbags to farms in the Sumas Prairie flood zone in Yarrow, B.C., on Friday. (Ben Nelms/CBC)

Curry says atmospheric river events of varying intensities each year tend to hit different areas of the province — the northern tip of Vancouver Island, for example, which tends to get a lot of rain.

"That's particularly dangerous because the amount of water that these atmospheric rivers carry is very large and they don't really release that water until they hit some topography, some mountains where they have to rise and the air cools and all that moisture that can just fall out of the atmosphere as rain." 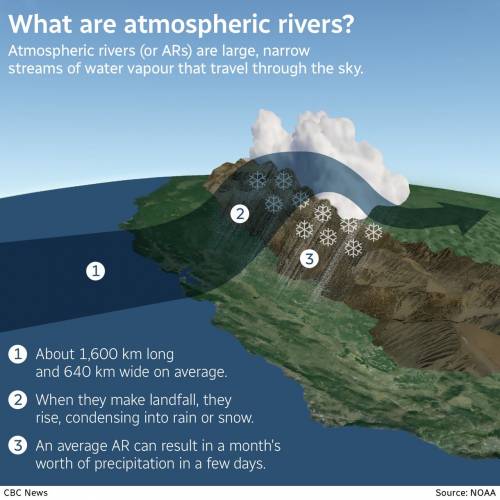 Atmospheric rivers (or ARs) are large, narrow streams of water vapour that travel through the sky. (CBC)

Warning system in the works

Castellan said his organization is working with meteorologists around the world to develop a scale for atmospheric rivers, much like the ones used to describe the severity of hurricanes.

Hurricanes are referred to as, for example, a Category 1 hurricane, which would indicate sustained winds of 119 to 153 km/h.

On the other end of the scale, a Category 5 hurricane indicates long-lasting winds greater than 249 km/h.

A scale like this could help local governments and residents plan and prepare for events such as the one that just occurred in B.C., two to three days ahead of its arrival, Castellan said.

"For the current generations, we are going to have to adapt to the more extreme weather going forward, and atmospheric rivers are definitely a part of that," he said.

Curry also said atmospheric rivers also have one distinct advantage —they can be forecast.

"This particular event was also forecast. We had 48, 72 hours' notice from the meteorologists. That was a pretty good idea of where this atmospheric river would hit, although we didn't necessarily know the rainfall intensity," he said.

"So once you get that kind of information, you can start to make some plans."

Cows that were stranded in a flooded barn are rescued in Abbotsford, B.C., on Tuesday. (Jennifer Gauthier/Reuters)

Previous : For B.C.’s salmon, floods represent another challenge to survival
Next : Kate Middleton’s pals ‘taken aback’ when she emailed to ask them to call her different name