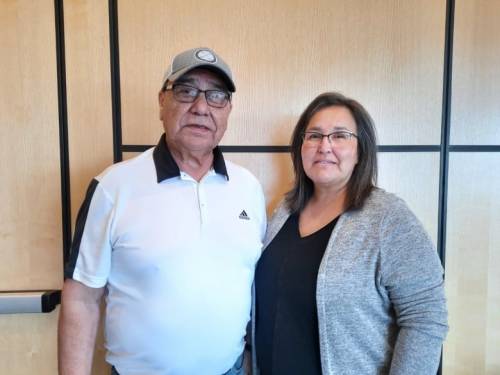 Saskatchewan residential school survivors and Indigenous leaders say they're disappointed Pope Francis won't be stopping in their province this summer.

They're also unhappy the Vatican, not survivors, decided the pontiff would touch down only in Edmonton, Quebec City and Iqaluit.

"It's pretty disappointing," Kinistin Saulteaux Nation Chief Felix Thomas said. "The problem from the start [of the residential school system] was that we had no say in things. And we saw how well that worked out."

In 2017, Thomas and others worked for months on an effort to bring Francis to Wanuskewin Heritage Park, a gathering place for Indigenous people for more than 5,000 years near what is now Saskatoon. They followed advice and protocols of the local communities, the Federation of Sovereign Indigenous Nations (FSIN) and the Assembly of First Nations.

The effort failed, but Thomas hoped that work would result in a Wanuskewin stop on this trip.

Residential school survivor Rick Daniels and his niece, Lori-Ann Daniels, say the Vatican and Catholic Church must take action on broken promises before any apology is issued in July. (supplied by Rick Daniels)

The FSIN lobbied last week for a visit to Muskowekwan First Nation, the site of Saskatchewan's last standing residential school. It also said survivors should have dictated where the pope visited, not the church.

FSIN Chief Bobby Cameron said that even after the delegations traveled to Rome earlier this year for the pope's first apology, many chiefs in Canada had no idea what was going to happen around this visit.

"It should have been up to us, not the Vatican," he said.

Daniels and his niece, inter-generational survivor Lori-Ann Daniels, say it's not just about the apology.

An apology will be meaningless unless the Catholic Church and Vatican first take action on a series of injustices and broken promises, they say.

That includes disclosure of documents on the schools and the unmarked remains being discovered across the country. It includes using some of the Vatican's tens of billions of dollars in assets to honour the financial commitments made in a settlement agreement more than a decade ago. It also includes a repudiation of the Doctrine of Discovery, which was used to justify colonialism and centuries of oppression against Indigenous people.

"For myself, as an intergenerational survivor, an apology is not what I need. It's about action," Lori-Ann Daniels said. "The church keeps saying 'We'll get back to you,' or 'We're working on it.' In the meantime, hundreds of survivors are continuing to die. When are they going to take this seriously?"

Métis Survivor Antoinette LaFleur, who is from Beauval and attended the Île-à-la-Crosse Boarding School, said they can't rely on the promises of the church or government, and communities must find ways to help each other heal.

"The past has given us a lot of hurt, but now is the time to take hold of our issues and move on with our lives," she said.

LaFleur said she'll try to make her way to Edmonton when Francis visits, but Rick and Lori-Ann Daniels say they probably won't.

Canada's bishops issued their first ever national apology to survivors last fall and announced a renewed fundraising effort. The pledge was to raise $30 million over five years.