On any given day in Kangiqsualujjuaq, Que., a person or family in crisis can call a 24-hour number and speak to a community member who can help.

Qarmaapik House offers a safe house for parents and children, and its goal is to keep families together, ensuring Inuit resources intervene when families need help.

"We use our language and we do the research on what we can do to help them out, for their family, for their children, or for individuals," said Ellasie Annanack, a counsellor at Qarmaapik House.

"I feel it's really important as a local to work with local families."

The Qarmaapik House staff and board of directors gave a presentation to Mary Simon, her husband Whit Fraser and their team on Tuesday as part of the Governor General's trip to Nunavik, highlighting the challenges they had in getting the program started back in 2016.

Gov. Gen. Mary Simon listens to a presentation by Annanack on Tuesday at the Qamaarpik House. (Adrian Wyld/The Canadian Press)

The program's founders wanted to reduce the number of Inuit children who are taken from their homes and communities and placed in care because of issues with violence, neglect or substance abuse at home.

"That's been one of our goals since Day 1, to be able to break the cycle with violence or [foster care] placements, because that's creating traumas over and over again," Annanack said.

Indigenous kids are over-represented in foster care across Canada, making up 52.2 per cent of placements, according to 2016 census data, even though only seven per cent of Canadian children are Indigenous.

The Truth and Reconciliation Commission report said that is "related to the intractable legacies of residential schools including poverty, addictions and domestic and sexual violence."

The federal government has committed to working with Indigenous groups, including Inuit Tapiriit Kanatami, to overhaul the system to be "child-centred, community-directed, and focused on prevention."

A law passed in 2019 affirms the rights and jurisdiction of Indigenous Peoples in child and family services. Cowessess First Nation in Saskatchewan has since launched its own Indigenous-led child-welfare system for band members, while other Indigenous groups are just getting started.

In Nunavik, getting the safe house started and ensuring it's recognized as a critical resource hasn't been easy. Funding comes from the Nunavik board of health and social services, the Kativik Municipal Housing Bureau and Kativik Regional Government, but the safe house is run by the community. It now offers psychological services and a community kitchen, among other programming.

After touring the safe house, Simon told a member of her staff, "It took them four years to get this going. That's a bit much." 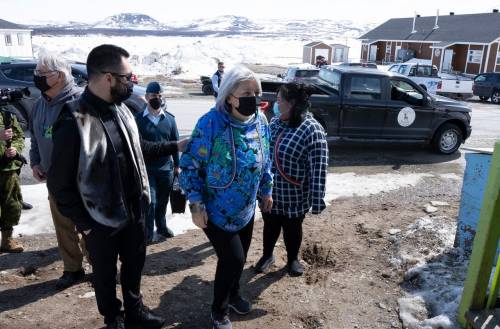 Simon makes her way into the Qarmaapik Family House as she visits on Tuesday. 'It took them four years to get this going. That's a bit much,' Simon told one of her staff members. (Adrian Wyld/The Canadian Press)

Those challenges didn't end after the launch. There was "a flood of people" in need of help. Staff had to learn to navigate the often complex child-welfare and youth criminal justice systems on their own, because the overburdened workers in the area were unable to help, Annanack said.

"Sometimes we would feel we were the cause of placement, because we didn't know the system," she said.

They also needed to build relationships with those working in child protection and policing. But with so many transient workers in the North, even that is difficult.

Qarmaapik is still working to build awareness of its services among officials including police, and staff say they spend a great deal of time and energy reintroducing themselves and their offerings to people who come and go every few weeks or months.

There are also challenges with housing, as in many northern communities. The safe house itself is in an aging building in need of upgrades.

More on the Governor General's visit to Nunavik:

Annanack believes Inuit-led intervention will help break those cycles of intergenerational trauma, and that in turn will help empower local kids to become the social workers, teachers and other professionals who serve their communities in the future.

"I hope there's more people that are inspired for this service, because we need it in all the communities," Annanack said.