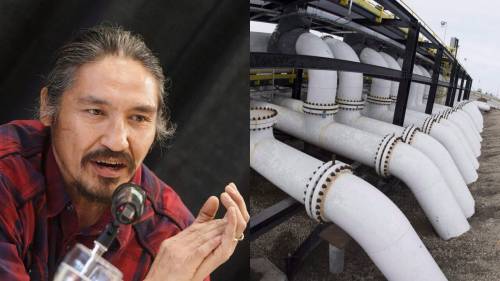 A new report details the "fraught" and "violent" history of Wood Buffalo National Park, which includes the removal of hundreds of members of the Athabasca Chipewyan First Nation. Now, the First Nation is asking for a formal apology and reparations.

The park, the largest national park in Canada located in northeastern Alberta and the southern Northwest Territories, was created in 1922 and expanded in 1926. In 1944, there was a "band transfer event," the report said, which led to the separation of Dene families.

The report, commissioned by the Athabasca Chipewyan First Nation and written by Alberta-based consulting firm Willow Springs Strategic Solutions, is a history of the park and its impacts based on interviews with residents, elders and archival material.

"Community members and Elders interviewed for this research have indicated that the Park's current co-management strategies are not adequate to meaningfully address the Park's violent, fraught history and its direct and cumulative intergenerational impacts on Denésuliné peoples," said the 182-page report released earlier this week.

Athabasca Chipewyan First Nation Chief Allan Adam said his grandmother, Helen Bruno, was forced out of Birch River, Alta., and her home was burned to the ground.

"This story gets me mad," said Adam. "Our people have suffered ever since then."

He said the First Nation wasn't allowed to hunt on the land, even through periods of starvation.

"If we were to hunt there, would've got charged," said Adam.

The First Nation is seeking an apology, compensation and land.

"We're asking that the true people of that land be recognized."

Adam said he's been working on this issue in council since 2007, but there has been no resolution.

"This is our land," said Adam. "The Dene people have paid a heavy price through this whole thing."

The report was meant to be released before the park's 100th anniversary in 2022.

A spokesperson for Parks Canada said the federal government "recognizes the past alienation and hardships" that accompanied the creation of the park.

"It is our hope that the next 100 years of Wood Buffalo National Park's existence is marked by shared governance and sound management that recognizes and celebrates this beautiful landscape and the unique Indigenous cultures that have shaped it and have been shaped by it," the spokesperson said.

Allan Adam, chief of the Athabasca Chipewyan First Nation, says his grandmother was forced out of her home due to the creation of the park. (The Canadian Press)

Sabina Trimble, lead author on the report, said when Parks Canada split the land, some families were separated.

"The creation and expansion of Wood Buffalo National Park … was a violation of Treaty 8, which had promised to protect the rights of the Dene peoples," said Trimble.

"Wood Buffalo National Park is one … key actor in a much larger context of colonial violence, dispossession, genocide."

At the time, in the 1900s, the Canadian government's goal was to preserve the park's animals and wilderness.

"The belief was conservation couldn't happen with Indigenous people's involvement, so they did their darndest to try to remove as many Indigenous people from the area as possible," said Peter Fortna, director at Willow Springs Strategic Solutions.

'Colonialization at its very deepest roots'

Dene Elder Alice Rigney said her grandmother was living at House River when she was forced to leave.

"They more or less left everything behind," said Rigney, a resident of Fort Chipewyan, Alta.

She said her father was charged in the 1930s for shooting ducks in the park. Rigney said it was a "slap in the face" because he was hunting to feed his family.

In an ideal world, Rigney said the land would be given back to the First Nation.

"I think it's about time that this is acknowledged," she said.

Leslie Wiltzen said his family was also removed from the park.

For years, he said his family didn't feel comfortable stepping foot on the land.

"It's good to see that history come out and hopefully the federal government's going to right the wrong that they created," Wiltzen said.

"It's colonialization at its very deepest roots."

Previous : Unmarked grave findings in Canada prompt reckoning among U.S. churches
Next : Twitter has online ad wind at its back