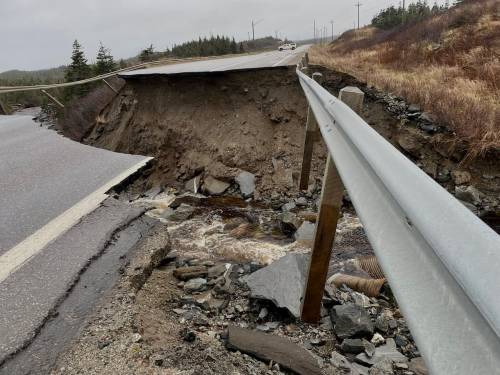 The rainfall warnings covering much of southwestern Newfoundland have finally ended, with a massive storm leaving record-breaking rain totals and damage in its wake.

Just over 165 millimetres of rain fell in the town of Channel-Port aux Basques since Tuesday, setting records for the highest 24-hour rainfall total and highest two-day rainfall amount, according to Environment Canada meteorologist Rodney Barney.

The northern Codroy Valley was drenched with even higher rainfall totals: 195.6 mm.

Meanwhile, a chopper rescued two people from an area near South Branch known to locals as Over Falls Wednesday. An RCMP spokesperson said the pair were campers who became stranded after water levels rose. Police say they called for help just after midnight on Wednesday.

Barachois Ground Search and Rescue and Joint Rescue Co-ordination Centre (JRCC) were deployed to find the duo and their dog, but the RCMP say rescuers couldn't find them due to the weather and road washout. Police say a Cougar helicopter rescued them just before 4:30 p.m. Wednesday.

Two campers and their dog were rescued from an area near South Branch on Wednesday. (Submitted by Tony Anderson)

Washouts and road closures have peppered the Trans-Canada Highway and roads from the Port aux Basques area north through the Codroy Valley.

While a damp, showery day with low winds lies ahead, said Barney, the rain warning is over for the area, and conditions will be more favourable for cleanup efforts in communities hit by the storm.

The storm also severed the Port aux Basques area from the remainder of the island because of road washouts, leaving some who live in outlying areas but work in the community stranded from getting home. Some detours have been set up within the community as a safety precaution. 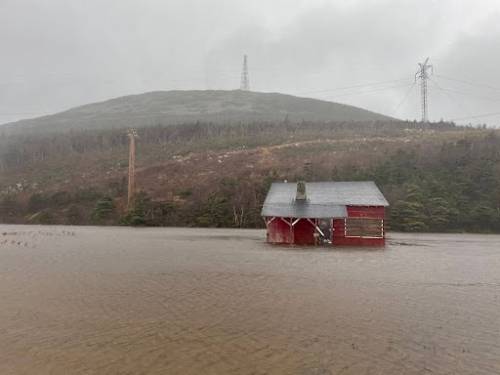 54 minutes ago3:01The CBC's Peter Cowan reports from Channel-Port aux Basques, N.L., about a dramatic rescue of two campers and some of the challenges facing towns cut off by storm damage. Troy Turner/CBC 3:01

On Wednesday, Premier Andrew Furey said approximately 5,000 people are isolated from the rest of the island because of the storm. The province had prepared helicopter services for emergency situations with no timeline on when roads will be repaired.

Port aux Basques Mayor Brian Button said things are calming down Thursday morning in his community, and the bulk of damage and main concerns are with the Trans-Canada Highway, which connects the town — and supply chains from ferries — to the rest of the island.

"The weather hasn't allowed officials to actually get on site and to take a look and be able to determine what's going to be needed to be done there. With the heavy rains that we did have, and the still flowing of water, it wasn't safe really to be able to do it, and they haven't been able to get the crews there." 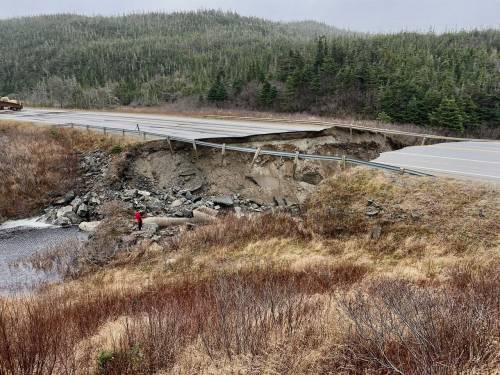 A section of highway east of Port aux Basques is completely wiped out. (Troy Turner/CBC)

Button said he has been in contact with the province's Department of Transportation every three or four hours since the storm first hit. He said as daylight breaks crews should be able to assess the washouts, and is hoping there will be a better indication of the damage caused to come at some point later on Thursday.

He said emergency service plans are in place and that the situation in his town is "well under control." He's asking residents to go easy on shopping and only to pick up essential items.

"We are going to have some supply issues," he said.

Transportation Minister Elvis Loveless said road repairs could take a week, knowing there is extensive damage throughout the area. The minister flew into Deer Lake on the island's west coast to get what he says is a better briefing of the situation. He said contractors will be on the ground on Thursday.

"Once you get to sites and start to do work there may be unknowns that we're not aware of," he said Thursday morning.

"But right now there's certainly a window of a week's work in terms of restoring operation to get roads open. For sure a week."

The Marine Atlantic ferry run between Newfoundland and Nova Scotia is still impacted on Thursday. The 11:45 a.m. run to and from North Sydney, N.S., has been cancelled for the morning, but the company is adapting to the situation.

According to a Marine Atlantic media release on Thursday, the company has implemented its contingency plan to temporarily resume the Argentia ferry service — on the island's east coast Avalon Peninsula — at the request of the provincial government. 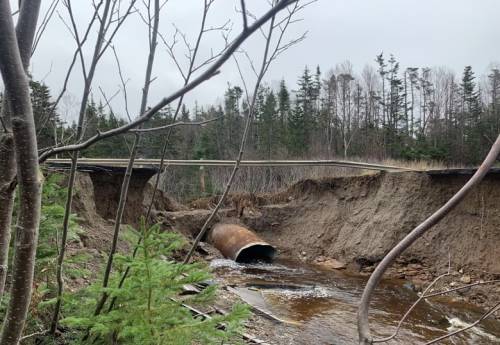 The first sailing between North Sydney and Argentia is scheduled to depart at 6:30 p.m. NT. The company said customers with reservations will be contacted with additional information as soon as preparations have been finalized.

The Argentia terminal is a seasonal service that normally operates between June and September. Marine Atlantic said employees are working diligently to prepare the terminal to accept customers on this emergency basis.

As for health-care services in Port aux Basques, Western Health said that because of road conditions only dialysis, cancer care and emergency services will be provided at the Dr. Charles L. LeGrow Health Centre on Thursday. All other in-person appointments at the hospital and MP Place — such as X-rays, blood collection, COVID-19 vaccinations, and mental health and addictions services — will be rescheduled.

The health authority said it will contact patients to confirm whether scheduled virtual appointments or home visits will proceed.