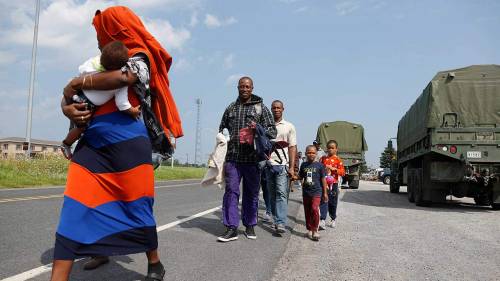 Asylum seekers hoping to cross the border at unauthorized border points, such as Quebec's Roxham Road, will once again be allowed to enter the country to make a claim.

The federal government lifted the ban on Sunday, citing the improving public health situation and the re-opening of the land border with the United States. The ban, which has been in place since late March of last year, saw would-be refugees denied at the border and returned to the United States.

Now, those crossing at unofficial crossings will once again be allowed to enter the country to claim asylum and remain in Canada.

Janet Dench, the executive director of the Canadian Council for Refugees, said the border should never have been closed to refugees in the first place, but was pleased to see it re-opened.

"Keeping the door open to refugee claimants is one of the basic fundamental obligations of the government of Canada, and they used the excuse of the pandemic for much too long," said Dench. "But finally, that door is open."

In a statement, the office for the Minister of Immigration, Refugees and Citizenship said that all asylum seekers "must adhere to strict public health measures," including a quarantine period and testing for COVID-19.

Numbers expected to climb, but not by much

The Canadian government said that, through an agreement with the United States, asylum seekers who had been turned away will still be allowed to submit a claim now that the measures have been lifted.

The government also said it expects to see more asylum seekers arriving at crossings such as Roxham Road in light of the ban being lifted.

However, it does not expect numbers to rise to 2017 and 2018 levels, when thousands of asylum seekers would arrive at Roxham Road on a monthly basis.

WATCH | The U.S. is no longer considered safe for refugees:

1 year ago1:49A federal court has ruled that the Safe Third Country Agreement violates asylum-seekers’ rights because the U.S. is no longer considered safe for refugees. 1:49

Marjorie Villefranche, the executive director of the Montreal-based non-profit La Maison d'Haïti, said to her knowledge, there were about 120 asylum seekers who had recently arrived in Montreal.

She said she didn't expect large numbers of asylum seekers to cross using Roxham Road, in part because they don't necessarily need to do so at the land border.

"[Crossing] through Roxham Road is for the asylum seekers who are waiting in the United States and would like to come here," she said. "Otherwise, they arrive by plane."

Those who arrive by air can also make an asylum claim once they arrive on Canadian soil.

Dench, with the Canadian Council for Refugees, said she also expects fewer crossings. She said many asylum seekers felt the need to come to Canada due to policies put in place by the Trump administration.

"There were people who had been in the U.S. for some time who didn't feel safe anymore," she said. "Of course, the political context is quite different now, which means that we don't expect near the same numbers."

Both Villefranche and Dench say the government should still repeal the Safe Third Country Agreement, saying it forces asylum seekers to use irregular crossings like Roxham Road.

Under that treaty, a refugee claimant must make a claim in the first "safe country" they arrive in. That means asylum seekers who come into Canada from the U.S. are turned away at official ports of entry.

Dench said that if Canada withdrew from the Safe Third Country Agreement, then claimants wouldn't need to use illegal crossings like Roxham Road.

Villefranche echoed the sentiment, wondering what the purpose of the treaty was when people can easily cross to make their claims.

"Why [are we] keeping that agreement?" she asked.

With files from Rebecca Ugolini, CBC Daybreak and Romain Schué