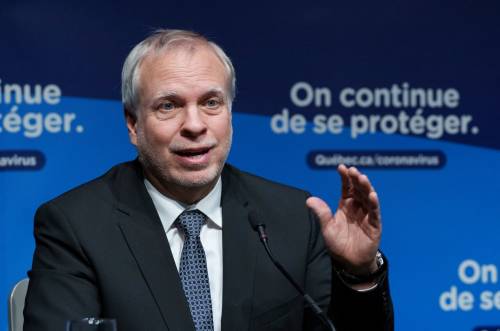 Volunteer parents could be asked to supervise Quebec classrooms if too many teachers fall sick with COVID-19, the province's Education Ministry says.

In a set of guidelines released Thursday, the ministry ordered schools to develop contingency plans for a "very large number" of anticipated teacher absences after elementary and high school students return to in-person learning on Monday.

"The objective is to keep students in school safely, despite the high rate of anticipated absenteeism among school personnel," the ministry said.

It suggests schools be ready to quickly replace teachers by keeping a list of people to call in as reinforcements, which could include "parent volunteers."

Education Minister Jean-François Roberge said on Thursday that parents will not be expected to be substitute teachers. They would be asked, as a last resort, to keep an eye on classrooms, he said.

Quebec's interim national director of public health, Dr. Luc Boileau, said on Thursday there is no reason to believe N95 masks would be helpful in a school setting. (Paul Chiasson/The Canadian Press)

"It's really important that our young people be able to see their friends, their teachers," Legault said. "I can't say it enough: the priority in Quebec must be education."

Students will be asked to wear masks inside, and rapid tests will be made available, the premier said. Quebec is acquiring 70 million rapid test kits, made in Montreal, he said.

Roberge said there will be some seven millions tests distributed to students over the coming two months, and there will be rapid tests available in schools to be used during the day if symptoms appear.

Legault said there is a high rate of vaccination among teenagers in Quebec and that ventilation in the province's public schools is safe, according to public health experts.

Still, nearly 60,000 Montreal students age five to 11 have not yet received their first dose of a COVID-19 vaccine, Montreal Public Health confirmed.

The new guidelines, which will apply to daycares as well, suggest having other people within the school system ditch their regular duties to help out in classrooms, including members of school support staff and resource teachers — with their "qualifications and aptitudes … taken into consideration."

One contingency plan could see teachers working remotely via video while students are supervised in classrooms by volunteers. Another could see one teacher instructing two different groups of students, with assistance. 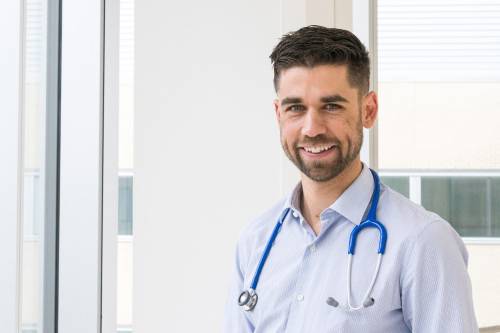 Dr. Olivier Drouin, a Montreal pediatrician, says a lack of health measures, like poor ventilation in schools, is a bit concerning. (Submitted by Olivier Drouin)

"Students should ideally stay in two separate rooms to avoid potential contagion. The two people (teacher and other resource) move from one room to another," the ministry said.

Before the holiday break, Montreal schools represented nearly half of all COVID-19 outbreaks in the city in December, most of which occurred in elementary schools.

Some educators say they are worried about a lack of health measures ahead of returning to classrooms. Some are calling for teachers to be prioritized for PCR tests, others say N95 masks should be accessible for all school personnel.

Quebec's interim national director of public health, Dr. Luc Boileau, said Thursday there is no reason to believe N95 masks would be helpful in a school setting.

Boileau said Quebec public health does not believe schools are a source of community outbreaks. Instead, schools reflect the overall situation in the province, he said.

Dr. Suzanne Vaillancourt, a pediatric emergency medicine specialist at the Montreal Children's Hospital, said the risk of transmission in schools will never be zero.

"If we wait to open up schools until it's zero, well, I don't know that schools would ever open," she said.

Vaillancourt said the negative effects of keeping kids at home are myriad, ranging from mental health issues to eating disorders. She said, as long as public health measures in schools are in place, parents shouldn't be concerned.

Dr. Olivier Drouin, a pediatrician and clinician scientist at Montreal's Sainte-Justine Hospital, also a children's hospital, said opening schools is the right move, but he has some reservations.

"Children don't live in a vacuum," he said. "And with the current situation in the health-care system and the lack of measures to prevent transmission in the school environment, I am a little worried."

The lack of health measures, like poor ventilation in schools, is a bit concerning, said Drouin, who suggested Quebec look to Ontario for a good back-to-school plan.

Along with distributing rapid tests, Drouin said Ontario rapidly expanded the availability of boosters to people in the education system. It also accelerated the vaccination of school-age children, he said.

As far as vaccinating kids five to 11, he said, "we've been less ambitious about and I think that was a mistake."