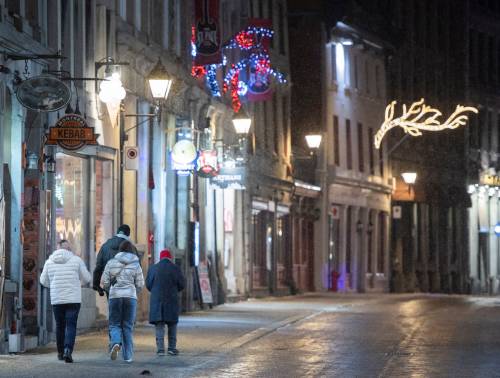 In early December, researchers across the globe were still scrambling to learn more about the transmissibility and severity of the Omicron variant.

But in Quebec, on Dec. 7, Premier François Legault and then-public health director Horacio Arruda, announced a plan to open the province up further, bolstered by optimistic hospital projections from the province's public health-care institute, the INESSS.

Despite uncertainty regarding Omicron, the Legault government said up to 20 vaccinated people could congregate for family dinners over the holidays.

"Maybe two weeks ago I wouldn't have done the same, but today I feel reassured," Arruda said at the time of the plans to re-open.

For Quebec, it would mark the beginning of one of the worst stretches of the pandemic — culminating with soaring hospitalization rates, Arruda's resignation and calls for greater transparency in government decision-making.

By Dec. 16, Legault urged people to scale back holiday gatherings to 10 people. Six days later, he acknowledged the province faced a "steep, exponential increase" in cases and further restrictions would be necessary (the toughest weren't put into place until after Christmas).

Now, the province's hospitals are overwhelmed with COVID-19 patients, with the highest hospitalization rates per capita in Canada, and surgeries have once again been delayed to free up staff and space.

Late Monday, Arruda submitted his resignation, citing an "erosion" in public trust. Legault thanked Arruda for his service and said in the interim, he will be replaced by INESSS head Luc Boileau.

Legault also floated the possibility of a tax on unvaccinated residents, which helped shift the focus away from a difficult stretch for the premier and his government.

But experts say the political muddling ahead of the holiday period in the face of a new, highly contagious variant is indicative of the provincial government's inability to react quickly to emerging science.

Arruda drew criticism in particular for his continued insistence that N95 masks weren't better than surgical masks, his changing position on boosters as well as rapid tests and for the curfew imposed on Dec. 31, once again without clear evidence such a measure is effective.

At times, though, it's been difficult to separate the public health findings from the politics.

In the wake of his resignation, health experts and stakeholders — including Quebec's College of Physicians — have called for the government to ensure Arruda's successor has independence from political decision makers.

Dr. Donald Vinh, an infectious diseases specialist at Montreal's McGill University Health Centre, said such a change will be crucial in the months ahead. He noted that Arruda was, in addition to the director of public health, an assistant deputy minister of the Health Ministry.

Given all that has been learned through the pandemic, a public health director should ideally be a kind of "quarterback," who will consult with experts on everything from ventilation to vaccination, Vinh said.

"Their mandate should be to review the current data and to provide in their best expertise and based on that data," he said.

Quebec introduced a curfew on Dec. 31. It was the second curfew imposed by the provincial government since the start of the pandemic. (Graham Hughes/The Canadian Press)

In Ontario, for example, the province assembled a "science table" composed of experts outside the government, while in Quebec, the government relies mainly on two provincial organizations, including the INESSS and the INSPQ, the province's public health research institute.

The science table in Ontario can be at odds with the provincial government but the rationales of their proposals are made clear to the public.

Vinh said the Ontario model has its faults, as well, and stressed that across the country there's a greater need for governments to consult experts in a transparent manner.

In reviewing the leadup to Quebec's latest disastrous wave, Vinh said a major problem was the province's lack of urgency in making third doses available to the general population, even though there was evidence as recently as October that would be beneficial.

He also said Quebec still hasn't done enough to prepare schools, which are closed in the province until at least Jan. 17, for another wave of the pandemic when it comes to ventilation, equipping teachers with adequate masks and making vaccines available to teachers and students.

"There's been a failure at multiple levels to address that," he said.

Dr. André Veillette, an immunologist and researcher at the Montreal Clinical Research Institute, praised Arruda for encouraging the public to follow the health guidelines in the early days of the pandemic, when he charmed the public and encouraged them to read and listen to music.

But Veillette said that over time "he was getting more and more tired and there were some of his decisions or recommendations that were getting controversial."

"He also seemed to be a little out of step with what international science was saying," he said.

Simon Bacon, a professor in behavioural science at Montreal's Concordia University, has been tracking public response to the pandemic in Quebec and said "trust in the provincial government has been slowly decreasing over time."

He said greater transparency and better data would help restore that.

"There's been a lot of talk about science driving the policy, yet we really haven't seen much of that science," he said.

"I think this erosion in trust has been where they've said, 'science is driving this decision.'

"Clearly, that science hasn't been communicated and the scientific community disagrees with that argument."

On Tuesday, Legault said he was open to changes to the way Quebec's public health experts work in connection with the provincial government.

But he said for the immediate future, the focus would be on getting the province out of this wave.

with files from Quebec AM and Radio-Canada's Tout un matin

Previous : Mum tells how she had to eat dog food in heartbreaking video on food poverty
Next : Philips shares slide as shortages and recall hit profits