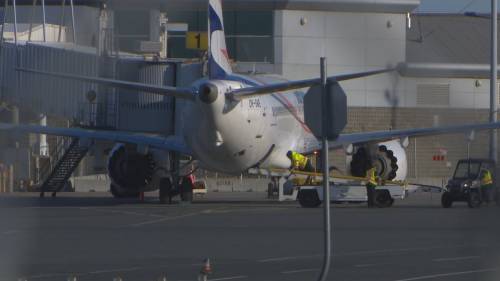 The first government-chartered group of Ukrainian refugees seeking shelter in Newfoundland and Labrador has landed in St. John's.

The flight touched down at St. John's International Airport near 7 p.m. NT after taking off from the Polish city of Katowice. A total of 166 refugees were on board, including 55 children, according to Premier Andrew Furey, who welcomed them to the province after their landing.

The flight, chartered by the province's Immigration Department, is part of rescue efforts first launched by the provincial government in March, which established a satellite office in Warsaw to help Ukrainians fleeing Russian attacks resettle in the province.

The office worked with the incoming Ukrainians to sort out details like obtaining passports, visas, and transportation.

Such an honour to officially welcome this group of Ukrainians to Newfoundland and Labrador, and to Canada. Thanks to everyone working hard to make this happen. 🇨🇦🇺🇦 <a href="https://t.co/jPijyTjaNU">pic.twitter.com/jPijyTjaNU</a>

Travellers were welcomed by a crowd of cheering locals, who say they are thankful to be in Newfoundland and Labrador after a long trip.

"Happy!" one Ukrainian exclaimed to reporters after clearing customs, adding he even had a job lined up at a mine in Baie Verte.

"I was dreaming for years to come to Canada, and I got a job on my first day. It's just perfect, the local government helped me so much…. It's just wonderful." 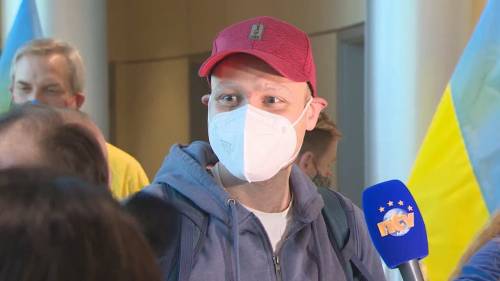 This Ukrainian traveller was one of the first to get off the plane and into St. John's International Airport. He says he's thankful to be in Canada. (Danny Arsenault/CBC)

Canada Border Services Agency data reveals over 19,000 Ukrainian arrivals in Canada so far this year, as Ottawa contends with a flood of applications from those seeking asylum. The federal government has approved over 90,000 temporary visa applications since mid-March.

In St. John's, both Furey and Byrne have formed part of Newfoundland and Labrador's welcoming party, along with local employers and non-profit groups like the Association for New Canadians.

The provincial immigration minister previously told CBC News that some of the people on the flight have already found work, starting their new jobs as early as Tuesday morning.

Furey called Monday a proud day for the province, saying both residents and officials are ready to support the incoming travellers however they can.

"This needs to be a place of safe haven," Furey said, speaking to CBC News at the airport just before the plane's arrival.

"These are people who have lost their homes — many of their homes, as we've seen on TV, have been destroyed by missiles. They have no place to call home, and we want to provide a home for them." 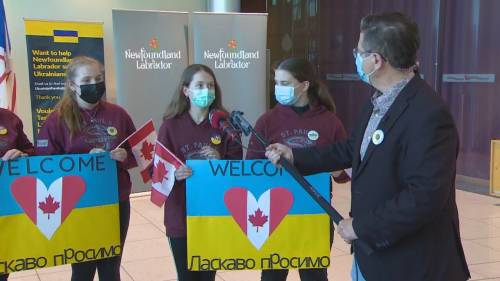 From left: St. Paul's Junior High Students Natalie Mitchell, Julia Lampe and Kate Rumbolt wanted to be at the airport to welcome Ukrainians arriving in Newfoundland and Labrador. (Danny Arsenault/CBC)

Furey said it's too early to tell how many more flights carrying incoming Ukrainians could land in the province, but says there are between 600 and 700 people who have connected with province's Ukrainian help desk waiting for entry.

He said they are also talking with Ottawa to help with things like education and health care for newcomers, but added it's more important to get the refugees on the ground in Newfoundland and Labrador first.

Ukraine crisis gives N.L. a chance to show how committed it is to newcomers

The airport's arrival area was also filled with a welcoming crowd, eager to make refugees feel at home in their new country.

Grade 8 student Julia Lampe held a poster created by students at St. Paul's Junior High in St. John's. She felt it important to be there to let children and families coming from Ukraine know they aren't alone in their journey.