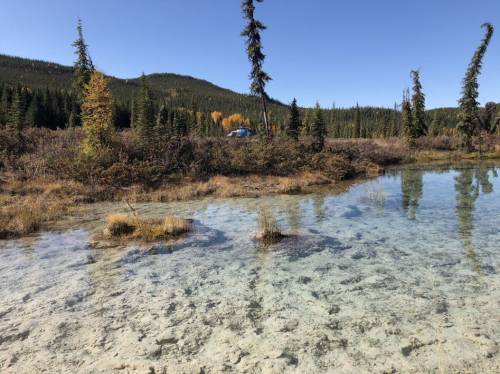 Not much is known about the Nahanni aster, but the flower has become a species of special interest to flora aficionados.

The plant has only ever been seen within the boundaries of the N.W.T's Nahanni National Park. Passersby would be forgiven if they didn't notice the small white flower at all.

Nahanni aster, with its yellow centre and pale pink or white petals, could be mistaken for a daisy or another member of the aster family, Nahanni National Park ecologist Sarah Arnold said.

"If you were walking past it, you probably wouldn't even really notice it there," she said. "They're not hugely showy."

The Nahanni aster is one of hundreds of aster flowers around the world, though Arnold is confident this species is exclusive to the N.W.T.

Only an estimated 130,000 stems have been counted in all, with a population that seems only to thrive in the presence of calcium deposits by the park's hot springs. There are 63 or so thermal springs in Nahanni Park, but the Nahanni aster has only been found in six.

"We don't really know at this point why the plant has been found at some springs, but not at others," Arnold said.

Arnold and other Parks Canada staff are in the process of completing a management plan for the Nahanni aster, which was placed on Canada's species at risk registry in 2018. Arnold said it will help raise awareness for its protection and hopefully help gather some information about the elusive species.

Consulting with surrounding communities is key, Arnold said, "we're really hoping to spend some time with Indigenous knowledge holders and ideally get them out to these sites as well to share their knowledge with us."

Herb Norwegian, a former Grand Chief of Dehcho First Nation, works with the park to bring traditional knowledge to visitors.

While he wasn't sure of the Nahanni aster specifically, he said the park is full of unique plants and wildlife, each of which carries a legend.

The Nahanni aster has only been found by some of the hot springs in Nahanni Park and seems to rely on calcium deposits left behind by tufa rock formations. (M.Beaujot/Parks Canada)

"When you go into the Nahanni and you go into these areas, it's almost like going into a Harry Potter kind of movie. It's just these unusual visions that you see, just totally different," he said.

"This little flower is just one of the many pieces of the bigger story." 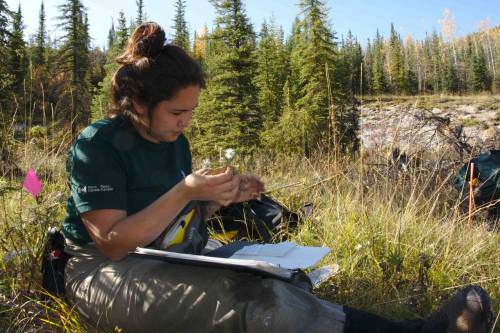 The Nahanni aster was designated a species at risk in 2018, Parks Canada then set out to collect detailed records of it to serve as a point of comparison for the future. (M.Beaujot/Parks Canada)

Suzanne Carriere, a wildlife biologist with the territorial department of environment and natural resources, said there's a good reason for the fantastical landscape Norwegian is describing.

Sections of the Nahanni Park are known to be a glacial refugia, meaning land not covered by ice sheets in the last ice age, she said.

That, combined with special habitat, such as hot springs, creates a geography where rare species are often found.

Though the Nahanni aster's place in the ecosystem is not yet known, Carriere stressed the importance of maintaining its conservation. She said she's heard some argue that only species that are useful to humans should be protected.

"You cannot pick and choose," she said. "This is not a zoo. Ecosystems are very complex."

Benchmark for the future

The flower was first discovered in the 1970s by botanists surveying the site. Parks Canada examined the flower again in 2003. That's when researchers compared the plant to its relatives — measuring stem and petal sizes, number of flower heads per stem and specific colouring and textures — to determine there were none others like the Nahanni aster around the globe.

The committee on the status of endangered wildlife in Canada designated the Nahanni aster a species at risk in 2018. Parks Canada then set out to survey the flower again. 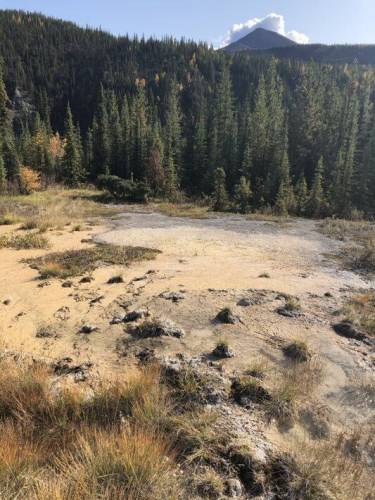 Biologist Suzanne Carriere says the flower is a gift that N.W.T residents should take pride in, but also feel responsible for protecting. (M.Beaujot/Parks Canada)

Arnold, the park's ecologist, said the 2019 survey was much more thorough than anything they've done on the aster in the past. Since they used different methods of data collection than the 2003 site survey, and not much is known about the 1970s discovery, it's difficult to compare their results to the past, but she said subsequent research will follow the same methodology; the most recent evaluation will serve as a benchmark for the future.

The Parks Canada team plans to conduct another survey in 2026.

Carriere said residents of the Northwest Territories should feel proud to have an endemic species that survived the last ice age, and also feel responsible for its survival.

"I know it's just a plant, but it's a message from the past," she said. "'Hey, I survived the last glaciation,' says the plant. 'I used those hot springs to survive so try not to destroy me so that I can still be there later, for all of our descendants to see.'"