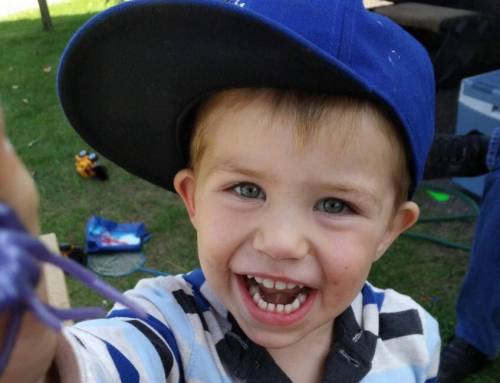 The Ontario mother whose son died after he was swept down the Grand River during flooding in February 2018 has pleaded guilty to criminal negligence causing death.

Michelle Hanson appeared in an Orangeville court virtually on Tuesday.

Hanson was charged after her three-year-old son, Kaden Young, died during a period of heavy flooding near Hanson's home west of Orangeville, which is about 60 km northwest of Toronto.

Hanson wiped away tears as Crown attorney Danielle Garbaty read an agreed statement of facts into the court record Tuesday.

Hanson had put her son, who was having trouble sleeping, in the van as she planned to go into Grand Valley to go to a convenience store.

"The incident occurred within minutes of leaving her home," Garbaty said.

"Ms. Hanson had driven her motor vehicle around a road closure barrier on the 10th Line of Amaranth near her home and into a flooded section of the roadway. This portion of the road was completely submerged under water."

The area had been under heavy flooding, there was a flood warning in effect and it was foggy, Garbaty said. She also noted a 2.4-metre, reflective road closure barricade was on the road and had been placed there at 2 p.m. on Tuesday. Hanson drove around the barricade.

The river had a strong current and the van was swept into the river, Garbaty said.

Young was in his car seat when the van went into the river. Hanson was able to get him out of the car seat and the van but "lost grip of him as they were swept down river by the strong current."

Kaden Young, 3, drowned in the Grand River in February 2018. (Submitted by the Young family)

Hanson was pulled out of the river by firefighters who said she showed "slow and odd movements and appeared confused," which is consistent with someone experiencing hypothermia, Garbaty said.

At the emergency department, the doctor found she was suffering from hypothermia and other minor injuries.

Hanson had faced a charge of impaired driving causing death, but that charge was dropped as part of the plea agreement between the Crown and Hanson's lawyer.

Blood taken while Hanson was in the hospital was analyzed by the Centre for Forensic Sciences in Toronto. That testing showed Hanson had a blood alcohol concentration of 60 milligrams of alcohol in 100 millilitres of blood, which is in the warning range under Ontario law but is below the prohibited levels in Ontario of 80 mg of alcohol in 100 ml of blood for fully licensed drivers.

Hanson also had oxycodone in her blood, although Garbaty noted it was considered to be in the "therapeutic range", and an expert witness during the preliminary trial was unable to say whether it would have impaired Hanson's judgment.

Helicopter and canine units bolstered by boats search along the Grand River between Grand Valley and Fergus, Ont., for the body of three-year-old Kaden Young in February 2018. (Kate Bueckert/CBC)

Garbaty noted in the agreed statement of facts that hundreds of people searched for Young in the days and weeks that followed. His body was recovered two months later.

Justice Gisele Miller asked Hanson, "Do you accept those facts to be correct?"