Omicron transmission is declining in B.C., modelling suggests — but hospitalizations have yet to peak

COVID-19 modelling released by the B.C. government shows the latest wave of the pandemic, propelled by the Omicron variant, may have peaked in parts of the province — but that British Columbians are not out of the woods yet.

Provincial Health Officer Dr. Bonnie Henry presented the latest modelling projections in a news conference Friday. She says the Omicron wave has spread faster than previous ones and health officials believe the top of the latest surge has already been reached.

The data shows while community transmission is trending down in most health regions, there is likely to be a rise in hospitalizations in the coming week or two.

This, according to Henry, is because of a lag time between peak community transmission and peak hospitalizations during the Omicron wave, as evidenced in other parts of the country such as Ontario and Quebec where the variant arrived earlier.

"We think that we hit the peak of community transmission in B.C. probably this past weekend," said Henry.

The latest COVID-19 modelling shows community transmission of the Omicron variant has already peaked in the Lower Mainland. (B.C. Ministry of Health)

B.C. health officials also recently looked at wastewater samples which Henry said support the prediction that Omicron transmission probably peaked in the Lower Mainland during the first week of January.

On Thursday, two weeks into January, the province reported more people in hospital than at any other point in the pandemic, displaying the lag between community spread and hospital admittance.

As of Thursday, 534 people in B.C. were in hospital with COVID-19 — more than at any other time during the pandemic — with 102 in intensive care, as the province reported seven more deaths from the disease.

Who is in hospital?

Henry said there has been a "significant uptick" in the number of people aged 70 and older being admitted to hospital in January, largely due to the Omicron variant, though Delta is continuing to circulate in the province as well.

The increase is concerning, said Henry, as age is still the most important risk factor for illness or death due to COVID.

Health Minister Adrian Dix said there are still 53,000 people over 70 who have received an invitation to book a booster but have yet to do so. 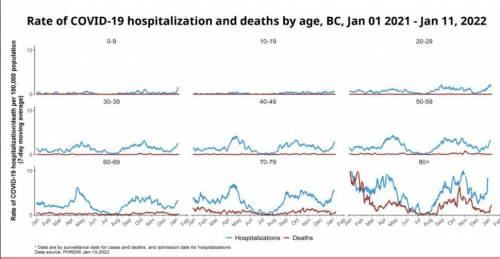 Henry says a person is 12 times more likely to end up in hospital with COVID-19 if they are not vaccinated. (B.C. Ministry of Health)

"Now is the time," he said, and urged everyone who has not been immunized to get a shot now.

According to Henry, 70 per cent of people in critical care this month, primarily infected with the Omicron variant, were unvaccinated and two-thirds of the people who have died in 2022 had not been immunized. Around 17 per cent of British Columbians remain unvaccinated.

Henry also noted a worrisome trend in the number of young people admitted to hospital this year so far, including nine admissions this week for children under the age of four who are too young to be vaccinated.

"This is an immensely challenging time," said Dix about the impact of Omicron on health-care in the province.

The predicted peak in hospitalizations comes when roughly double the number of health-care workers are calling in sick themselves.

Henry said data shows the anticipated surge in hospitalizations will run from Jan. 15 to Jan. 22.

"The peak is coming," she said.

In December, a report from an independent COVID-19 modelling group said hospitalizations due to B.C.'s Omicron-fuelled fifth wave would reach unprecedented heights by around mid-January.

The latest information shows Omicron has displaced the Delta variant as the primary driver of infections in the community and in hospitals in less than six weeks, which is consistent with data around the world.

With files from The Canadian Press

Previous : ‘Freedom, back to life’: Canadian returns home after 15 years imprisoned in Egypt on spying charges
Next : Illinois judge disparaged lawyer in comments caught on video