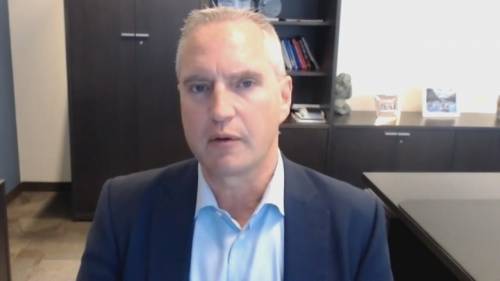 Canada's major oil producers are now united in trying to achieve net-zero greenhouse gas emissions by 2050, calling their plan good for the economy. But one group says it's a public relations push to get federal money.

Under an alliance announced Wednesday, the country's five biggest oilsands producers will combine forces, money and technology to reduce emissions in one of the most carbon-intensive jurisdictions in the world.

"We found out that by working together we can do this faster, we can accelerate the results and drive down the costs," said Mark Little, president and CEO of Suncor.

A key joint effort would be to build a carbon-sequestration trunk line for all of the companies' facilities to deposit captured atmospheric carbon dioxide underground near Cold Lake, Alta.

Still, no revenue sources are associated with sequestration and storing emissions, Little said, so the companies will have to work with government on public-private partnerships to help fund the project "to make sure that this is going to make sense for our shareholders."

There's no specific dollar amount quoted for the investment pitch, but the oil companies hope help comes from the federal and Alberta governments.

Suncor president and CEO Mark Little says the alliance of oilsands producers aims to cut a third of their emissions in each of the next three decades as a result of the initiative. (CBC)

Suncor's CEO said it's worth investing in the plan, adding the entire initiative is going to cost about $2.5 billion a year for an industry that's generating government income of about $15 billion a year, as the companies also tap into emerging emissions-reducing technologies.

Push to move away from fossil fuels

Keith Stewart, a senior energy strategist with Greenpeace Canada, said global investors and the International Energy Agency say achieving net-zero emissions should mean getting into renewable energy projects and out of pumping oil, and investors want to see corporate plans that steer away from fossil fuels.

He said there are alternatives to extending the oil business, but the executives "just can't imagine that world."

"And if they can't imagine it, they're gonna end up being the Blockbuster Video of the 21st century, [which] didn't recognize what the threat from Netflix was," Stewart said.

"We really need to see this as a public relations push, and a push for government funding. They really need to get serious with changing their business plan."

Stewart said the technology is available now to switch from oil, gas and coal to renewable energy, and according to the International Energy Agency, net-zero means not building new fossil fuel infrastructure.

He said the alliance thinks it "can keep selling oil forever, and that's just not what the science says."

With files from CBC's Peter Armstrong