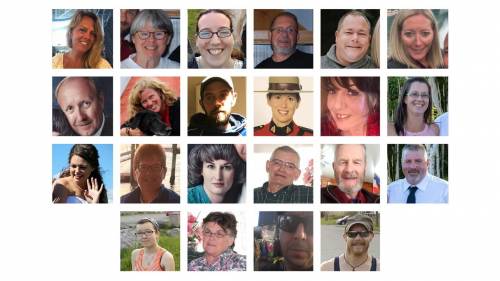 Long before he went on his murderous rampage in April 2020, two of Gabriel Wortman's former neighbours saw "red flags" in his behaviour and were wary of everything he said and did.

"He always put that perception out, 'Hey, I'm easy going, likable,'" recalled George Forbes in an interview with the commission currently examining the killing of 22 people on April 18-19, 2020.

"There are some people that you get to read between the lines on what they're saying … and I could notice that there was some dysfunctionality in his personality and some disorderly traits that I perceived as warning signs."

George and his wife, Brenda, tried to warn others about the gunman, but they say their warnings were ignored.

The couple are both retired from the military. They moved to Portapique in the summer of 2002 and met Wortman about eight months later as he was looking for properties to buy. They eventually became neighbours.

Brenda Forbes told CBC News in an interview this week that staff at the Mass Casualty Commission have been keeping her up to date on the public hearings. She and her husband were both interviewed in the weeks immediately following shootings as RCMP and the commission tried to piece together what had happened, and why.

The Forbes said that when Wortman found out about their military background, he tried to get information from them about weapons and asked each of them whether they could buy him guns or ammunition. The couple refused.

Brenda told the commission that when she asked Wortman where he was getting his guns, he replied, "I have my connections."

George Forbes, a retired small arms instructor, said Wortman did not handle firearms safely, including not checking whether they were loaded when he showed them off.

At one point, George Forbes confronted Wortman about shooting his guns into the mudflats that are exposed at low tide.

"You've got to stop this, man, because all you need to do is hit one rock and you have a ricochet going somewhere's else where you have no control over that," Forbes said, in relaying his conversation with the gunman to the commission.

He said Wortman dismissed his concern, saying it was just fun. 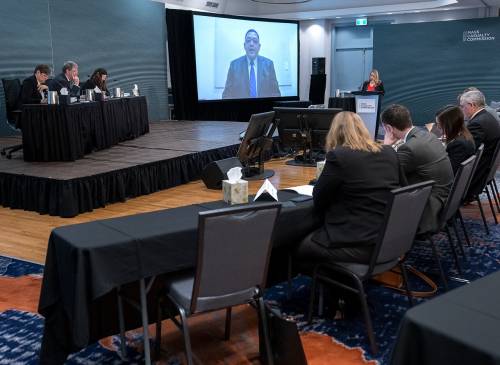 Commissioners Leanne Fitch, Michael MacDonald, chair, and Kim Stanton, left to right, listen as Benjamin Sampson, a firearms expert with the Ontario government, appearing by video, provides technical information at the Mass Casualty Commission inquiry into the mass murders in rural Nova Scotia on April 18-19, 2020, in Dartmouth, N.S., on May 3, 2022. (Andrew Vaughan/Canadian Press)

George Forbes said he opted not to call the RCMP about the backyard shooting because his wife had already contacted police about another incident involving Wortman and didn't get far.

"I'm still a little upset that they didn't go further with it," Brenda Forbes said in an interview with CBC.

"And basically saying that if I didn't have actual proof like pictures and stuff like that. It doesn't make sense to me and so they said they didn't have enough information, so yeah, that still irks me."

When Brenda Forbes called the RCMP in 2013, it was to report what she'd heard second-hand: that Wortman had pinned his long-time partner, Lisa Banfield, to the ground and had beaten her while three other men stood and watched.

Forbes told police what she'd been told but said the officers who responded told her they couldn't do anything without information from a direct witness.

Forbes said other people in the community — including one of the witnesses to the abuse — wouldn't report Wortman's actions to police because they were afraid of him.

Forbes said she got a similar answer from Banfield, when she told Forbes she was being beaten.

Forbes said she told Banfield to leave and seek help, but she said Banfield refused, saying she was afraid Wortman would kill her. 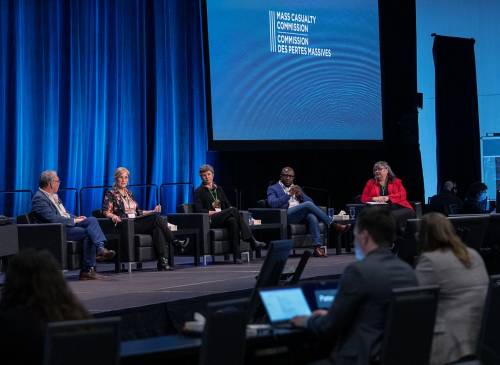 When initially confronted with Forbes' allegations of failing to properly respond to a complaint of domestic violence, RCMP said they had no record of her call.

But a subsequent search of their records in the months following the mass shooting found an officer's notes about a call involving Forbes.

Const. Troy Maxwell, the RCMP officer who took Forbes' July 6, 2013, complaint, provided the commission with one page of his notes.

According to the RCMP's internal review of their records of Forbes's complaint, Maxwell remembered it was about concerns Wortman was acting "aggressively in the neighbourhood." The review found no indication in the records that it involved domestic violence.

Maxwell went to the Portapique cottage twice, with two different colleagues, with "negative results," and there were no more details on the complaint.

Brenda Forbes said she attempted to warn Banfield that she had seen Wortman with other women when Banfield wasn't with him in Portapique.

But Forbes said when Wortman found out, he dragged Banfield to the Forbes home to confront her.

"And he said, 'You told her that I was screwing around on her,' and I said, 'If the shoe fits, wear it,'" Forbes said this week.

"He grabbed her and hauled her out of the house. And from that day on she was not allowed to talk to me."

Harassed out of their home 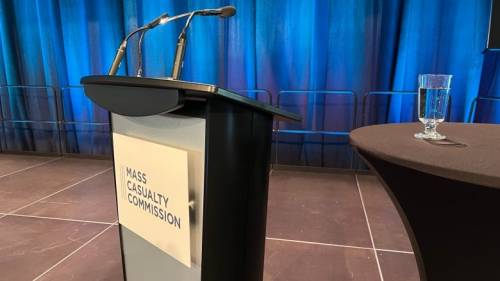 Forbes said Wortman started following her and would park outside the house when she came home every day.

"I would hide my car in the woods so he wouldn't know I was home, because I noticed he was following me," she said.

"And he'd come up to the house and just stare at it, point at it and he'd be there for like half an hour. And then I guess he must have realized that maybe I'm not home, but he would do it every day, when my husband was gone. He knew that my husband wasn't there."

When George Forbes returned from a job he'd been doing in Africa, his wife told him they had to leave Portapique, which they did in 2014. George Forbes said they were so anxious to get away, they took a $100,000 loss on the sale of their home.

Brenda Forbes still lives with severe PTSD, partly as a result of her encounters with Wortman, and said it's her hope that everyone who was hurt by the tragedy will get the support they need to move on.

"I help other people with post-traumatic stress disorder…all the people that were really affected by this, they need the same type of help," she said. "And I would bend over backwards to give that help to them."

MORE TOP STORIES How smart is the use of a smart baby monitor?

Previous : UAE leader who owned £1.4bn of London property dies at 73 after 18 years ruling country – World News
Next : Young dad dies from heart attack after jumping in river trying to save his dogs