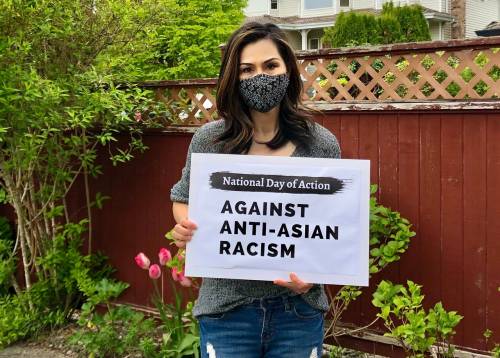 More than half of Asian Canadians experienced discrimination in past year: survey

More than half of Asian Canadians have suffered discrimination over the past year, according to a new survey from the Angus Reid Institute.

In the survey published Tuesday, 58 per cent of respondents said they have experienced incidents of discrimination in the past 12 months. More than a quarter — 28 per cent — said these situations happen "all the time" or "often."

People who are young and lower income are more likely to experience more intense forms of bigotry, according to the survey.

"They're telling us through this survey that they have been bearing the brunt of discrimination, of anti-Asian discrimination," said Shachi Kurl, president of the Angus Reid Institute.

"These folks are disproportionately younger," she said. "They might be on the front lines a bit more, they might be working in the service industry, they might be more likely to be taking transit rather than driving a car or working from home."

Other key findings include how incidents have been perceived, with the survey suggesting 53 per cent of Asian Canadians who experienced racism said the incidents were hurtful and have stayed with them.

Two in five, or 38 per cent, of respondents who had faced discrimination said they were troubled but able to put it aside, while nine per cent said they have not been affected, according to the survey's results.

Doris Mah of the Stand With Asians Coalition says the survey reveals the extent of ignorance that exists in society. (Doris Mah)

The institute also questioned a further 1,877 respondents who identified as non-Asian for an upcoming series examining diversity and racism in Canada. One in five said they felt "most or all Asian Canadians do not contribute to the broader community," the institute said.

Doris Mah, founder of the Stand With Asians Coalition, said that finding stood out.

Mah was born in Hong Kong and emigrated to Canada with her family more than 30 years ago.

She points to how Chinese workers were crucial to the construction the Canadian Pacific Railway as just one of the many contributions from the Asian community.

The survey results also suggest that one in three non-Asian respondents say Chinese Canadians are more loyal to China than to Canada when it comes to conflicts between the two countries.

"This is just shocking, and I think there's a lot of ignorance out there," Mah said.

She said there needs to be more education when it comes to raising awareness against racism and discrimination.

Since the onset of the COVID-19 pandemic, reports of anti-Asian racism and xenophobia have risen in B.C.

Data from the Vancouver Police Department shows the number of anti-Asian hate crimes rose from a dozen incidents in 2019 to 98 in 2020, while general hate incidents nearly doubled. Vancouver police launched a task force in response to the surge.

In May 2020, Vancouver Mayor Kennedy Stewart made a proclamation that the city is committed to addressing racism and hate after a dramatic increase in anti-Asian racist and xenophobic incidents.

There have also been a series of rallies and campaigns aimed at curbing the mounting discrimination.

In late March of this year, 500 people gathered at the Vancouver Art Gallery to denounce the hate.

Several other cities in B.C., including Victoria, have also made proclamations denouncing the racism and pledging programs to help combat it.

Previous : Pressure mounts on UBC to review honorary degrees
Next : The holiday hotspots welcoming Brits as Portugal is placed on the amber list – World News