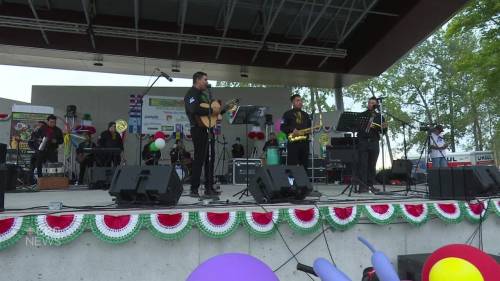 Migrant workers in Leamington, Ont. use music to keep spirits up while away from family

While watching him perform a trumpet solo in front of dozens of people, it's hard to imagine Arturo Almanza spending his days doing anything else.

But when he's not on stage, Almanza is an agriculture worker in Leamington, Ont. He often works 12-hour shifts tending to crops, practising music from 9 p.m. into the early morning hours.

His group, Latin Power Band, played its first big show at the Seacliff Amphitheatre in Leamington on Sunday.

The band is not only an escape from difficult manual labour, but it keeps him from missing his family — his parents, wife and three children — who are all back in Mexico.

"[The music] takes me away from problems or missing my family," Almanza said through a translator. "It brings me a lot of joy and it also helped … being in the farm, having some negative or difficult thoughts."

He's not the only one finding comfort in his instrument — many of the other 13 band members joined for the same reason.

The group, which formed in October 2020, started as a way to give the men something to look forward to outside of work.

WATCH: Members of Latin Power Band talk about how music helps them cope with being away from home:

15 hours ago2:25The band members talk about how music keeps them from feeling depressed or lonely. 2:25

"My co-workers and I were kind of falling into a depression. Unfortunately, we have colleagues who have fallen into alcoholism and drug addiction, because we spend so much time away from home and without our families," conga player Noel Cedillo Aguilar said through a translator.

Cedillo Aguilar has worked in Canada for almost two years and hasn't seen his family since he left.

"You feel it. There comes a time when we feel lonely and to some degree without a security blanket, as we would say in Mexico," he said.

Thousands of migrant workers come to Windsor-Essex, many from Mexico, to work in the agriculture sector. While the adjustment has never been an easy one, COVID-19 has exacerbated the isolation and anxiety felt by workers.

During the first wave of the pandemic, migrant workers in Windsor-Essex also made up the bulk of COVID-19 cases, meaning many of the workers saw friends and colleagues fall ill.

Juan Jaime, a director at Working Link, an organization that runs work programs for migrant workers, says he saw their struggles and thought a band would be a good way to help. So he got the group together.

"If you imagine living in a room with four walls … all the time for the last 14 months and doing the same job and nothing else, this is why [the band] is really important," Jaime said. "Something new, not the routine."

Jaime says it also helps the surrounding community see the men beyond their occupations.

"People see those guys not only as the greenhouse worker," Jaime said, but "that they have a lot of talent."

Vanessa Calva, the head of the Consulate of Mexico in Leamington, says the band is also a way to bring Mexican culture to Canadians.

"What we want is for them to have healthy activities that they can lean on, and music does that for them and it brings also a sense of community amongst them," Calva said.

"They're from different states [in Mexico] that have different stories to bring, which makes it very diverse, even if they are all Mexicans."

Workers reminded of life back home

The musicians agree. They told CBC News they're happy to share a piece of home with Canadians.

"I want to bring joy to the community, to the Canadian people, bring some music and culture, especially during the pandemic that we're going through," said pianist Juan Enrique Aranda Andrade through a translator.

Though the music they played on stage was joyous, it reminded the men of home and their desire to be reunited with loved ones.

When asked how their families would react to seeing them play on stage, Cedillo Aguilar said, "I think they would be very proud to see that I am well, that I am happy, that we have a positive project. They would definitely feel proud of me."

As the band continues to grow, Jaime said they are looking at getting a bigger practice space.