It's a sunny Thursday in Miawpukek, a Mi'kmaw community on Newfoundland's south coast, and Grade 9 students shuffle into their classroom at the back of St. Anne's School.

A straggler takes her seat as attendance is taken. Then come the greetings, the "good mornings," the hellos.

But then: the most fearsome words in whatever language — "pop quiz."

The students practise their alphabet, and then their teacher, Angela Christmas, sings out the first word, "pa'si."

She slows and emphasizes every sound, almost every letter. Pa'si means sit down.

Skma comes next — that means wait. Then kmu'j, or stick, and ki's, "it already happened." 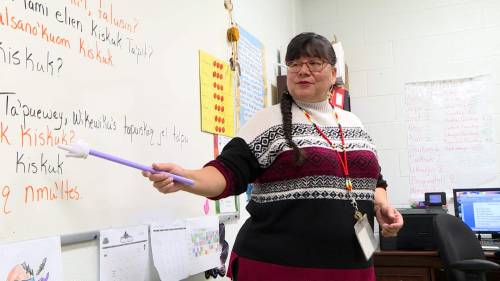 Teaching the Mi'kmaw language in Miawpukek

A few words later, and then the students grade their own tests — trust in this class is pretty high.

But really, these lessons just aren't about spelling and translation. This class not only gets to the very heart of what it means to be Mi'kmaq, but is a manifestation of a generations-long project to restore a language that some feared might one day have gone silent in the community, also known as Conne River.

"Language and culture are mutually inclusive, and the old saying is you can't have one without the other," said Rod Jeddore, the director of education in the Miawpukek First Nation.

"It's important that our students reclaim their language, while at the same time reclaiming their culture and our traditions as well. Because a lot of our community traditions. were slowly dissipating, dying off, and we have a role as leaders to bring that back.

A place to get started

From Kindergarten to Grade 9, students at St. Anne's School in the Miawpukek First Nation spend a few hours a week learning to read and speak the Mi'kmaw language.

It's not enough — community leaders dream of complete immersion, and extended grades — but it represents a starting point in a massive, emotional project: reintroducing a near-vanished language that was beaten down and banned.

"I hear them practicing among themselves, you know, and they're using it and not only just in the classroom, but in the hallways," Christmas, a Mi'kmaw woman from Membertou First Nation in Cape Breton said. "I hear them and it's beautiful." 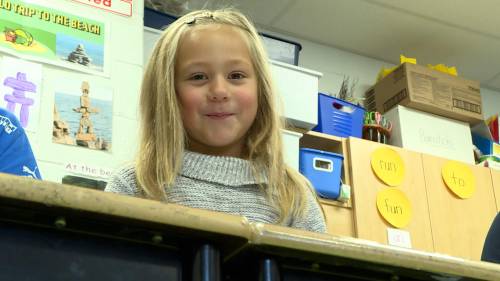 6 hours ago2:19Kindergarten students at St. Anne's School in the Miawpukek First Nation are introduced to Mi'kmaw words and phrases as part of their education. Every morning, students in the school sing the Mi'kmaq Honour Song. 2:19

Christmas teaches students in every grade, from Kindergarten up. She says her students will leave her classes not quite fluent, but with enough knowledge to hold a conversation.

They'll also leave with a little bit more of an understanding of their culture and history.

For her students, it begins that way.

Saqamaw Mi'sel Joe, the chief of the Miawpukek First Nation, says oral history shows that the Mi'kmaw language thrived for generations in the area.

But interference from the Catholic Church, he says, "stole" the language from its people.

Shortly after he arrived in St. Alban's 105 years ago as the area's first full-time priest, Father Stanley St. Croix decided to ban the use of the Mi'kmaw language, in school and in church.

Other priests, who went to Conne River on missions, would preach to the community in Mi'kmaw. And community members organized their own services in their own language. 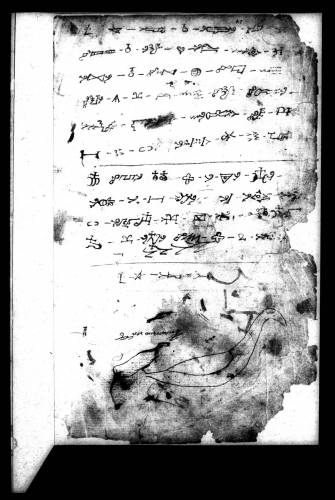 The Lord's Prayer and the Hail Mary prayer is depicted in Mi'kmaw hieroglyphic script in a prayer book kept by the Miawpukek First Nation. The book was used in Conne River throughout the 1800s. Before a transition and formalizing of the language in Latin alphabet, Mi'kmaw words were described using a hieroglyphic script that was observed and collected in part by Catholic missionaries. (Memorial University Digital Archives Institute, Miawpukek First Nation)

But according to author Doug Jackson — who was hired by the Miawpukek government in the 1970s for research — St. Croix "told teachers to strictly enforce the use of English in the classroom." Children were strapped if they spoke in Mi'kmaw.

St. Croix opposed then-chief Noel Jeddore, who tried to keep the language alive in the community.

Students were forced to move for English-only classes

According to the Diocese of Grand Falls, the church also decided in the early 1900s that all students would need to attend school in St. Alban's, in English, "without any respect for Mi'kmaw spirituality or traditions."

It was, at that time, impossible to travel back and forth daily. So children were placed in boarding homes. Siblings were separated, and some children were underfed.

While Conne River's children were not sent to residential schools, Joe says the experiences they had away from their families in St. Alban's were sometimes similar. 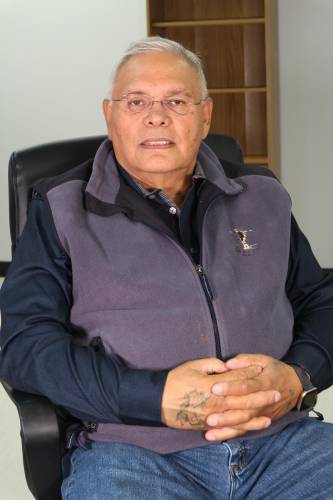 In October, the Roman Catholic Diocese of Grand Falls apologized for the "suffering and trauma of those days."

"Individuals representing the Roman Catholic Church in central Newfoundland co-operated with others in authority to debase the honour of Indigenous persons and the church," Bishop Anthony Daniels wrote in a letter to his congregation.

"We failed in our mission to protect and defend those who most needed our support and our respect."

'They stole our language'

"The treatment we got was probably no different than they had in any small school in Newfoundland," he said. "What the difference was they stole our language. Forced us to give up our language.

"The beatings and and the things that you suffered in school, you get over it to a degree. You will always remember it. But an unforgivable part is the loss of language."

Decades later, the students taught by Christmas can't go home and get help with their homework. Outside their classes, there's very little Mi'kmaw spoken.

In fact, they are the ones teaching their parents, something Christmas tells them to take pride in. 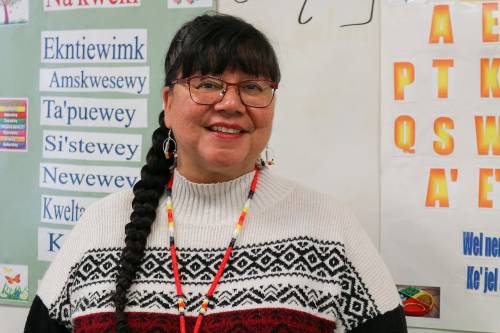 "They don't see it. They don't hear it," said Jeddore.

So the project to return the language into classrooms and into the community started from scratch.

"When we as a community started the process of reclaiming our language, we couldn't find people within the community that were willing to share," Jeddore said.

Conne River has a long history of Catholic belief, and after all the insults directed at the language by priests and church officials, Jeddore said "a lot of the language was put aside, never to be spoken again. Or only done in secret."

Elder Priscilla Drew was the first Mi'kmaw language teacher in the Miawpukek First Nation after the band government took over schooling. During the COVID-19 pandemic, Drew shared videos on Facebook containing some Mi'kmaw lessons.

The First Nation took control of its schooling in 1987, and started a language program led by Priscilla Drew, an elder in the community.  She was interested in the language, but wasn't formally trained as a teacher.

Many of the teaching tools the school now uses comes from work done in Nova Scotia and across Mi'kma'ki — Christmas herself was born in Membertou, a Mi'kmaw First Nation on Cape Breton, and prior to his stint teaching the language courses himself, Jeddore spent weeks training in Eskasoni, the largest Mi'kmaw community in the world.

"Any part of learning a language is that you have to live it," Jeddore said.

They have taken that knowledge back to Miawpukek, but that immersion model is one that Joe wants to emulate much closer to home.

"My pet project, if you want to call that, is to find some way to open up the school, the old school, for immersion," Joe said.

"When you walk in the door, you leave your English thinking language behind and you speak only Mi'kmaw."

The First Nation's next step is to establish a language committee, which will be comprised of an elder, youth, and community members. That committee hopes to develop a program, with some money from the federal government, to expand Mi'kmaw in the community. 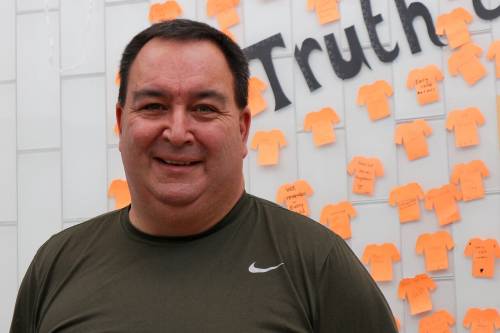 Rod Jeddore is the director of education for the Miawpukek First Nation. He also worked as the school's language teacher before Angela Christmas. (Garrett Barry/CBC)

The road to re-establishing fluency in a community is a long one: a generations-long project, Joe says.

But it's been done elsewhere, he said. And it's too important not to pursue.

"It's our heart and soul," he said. "There's things you can say in Mi'kmaw that you can't say in English."

"If I thought for a moment that it couldn't come back. Or there was no chance, I'd stop doing it. But I know in my heart and soul that it can come back. It will come back. And it's just a matter of time, it'll be here."

Previous : The most sought after staycation spot in the UK – and it’s not the Lake District
Next : ‘Just trying to be a legend’: Vikings’ Justin Jefferson channels Randy Moss with huge game against rival Packers