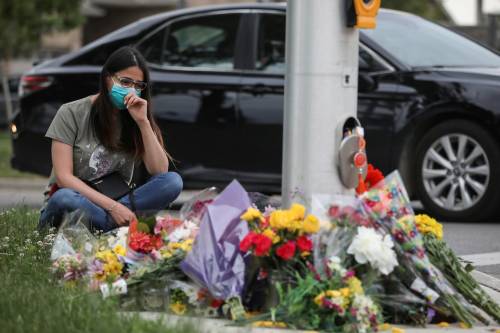 London police say they're considering laying terrorism charges against the man accused of killing members of a Muslim family out for a walk in in London, Ont. on Sunday because of their faith.

But getting the evidence needed to prosecute isn't always easy under Canadian law.

"We're talking here about the legal system. Not politics or not what you or I or anyone else might view as terrorism around the dinner table," said University of Calgary law professor Michael Nesbitt.

"It's a rather complicated area … because we don't have a definition of terrorism in Canada."

On Sunday, four people — Salman Afzaal, 46, his wife Madiha Salman, 44, their 15-year-old daughter Yumna Afzaal and Salman Afzaal's 74-year-old mother — were killed when a black truck rammed into them as they were walking. The youngest member of the family, Fayez, 9, survived.

On Monday, London Police charged a 20-year-old man with four counts of murder and one count of attempted murder for what they say was a "planned, premeditated act" against a family of five "because of their Muslim faith."

Det.-Insp. Paul Waight of the London police said they are talking to RCMP and prosecutors about the possibility of filing terrorism charges.

The National Council of Canadian Muslims called the incident a terrorist attack on Canadian soil and urged that it be treated as such. Prime Minister Justin Trudeau stood in the House of Commons on Tuesday and described it as a "terrorist attack motivated by hatred." His national security adviser Vincent Rigby also called it terrorism in a public speech.

But not all acts of violence generally viewed by the public as terrorism are prosecuted as such.

The threshold is high

Trudeau and others called the 2017 Quebec City mosque shooting a terrorist attack. But no terrorism charges were laid against the shooter, who ended up pleading guilty to six charges of first-degree murder and six of attempted murder.

The van attack in Toronto in 2018 that claimed ten lives also led to discussions about terrorism charges. Police said the killer told them after his arrest that he'd set out to kill as many people as possible and was inspired by the misogynistic "incel" movement, whose members blame their lack of sexual activity on women.

Nesbitt said one of the challenges involved in pursuing terrorism charges is that Canada's anti-terrorism laws were drafted in a "left of bang" frame of mind — meaning they were meant to disrupt terrorist activity before it took place.

In the aftermath of 9/11, the federal government amended the Criminal Code to add new anti-terrorism offences covering acts carried out "for a political, religious or ideological purpose, objective or cause" and meant to intimidate the public. They include facilitating a terrorist activity and terrorist financing.

"It was to prevent another 911 from taking place. Not to criminalize what happened after the fact, because we already had that in our most serious crime, which is murder," Nesbitt said.

"Once the action has taken place, it becomes significantly less evident how you go about getting terrorism charges laid."

Little has been released publicly about the London hit-and-run suspect's motivation. Police haven't revealed what, if anything, the accused said to officers when he was arrested, or why they believe he had targeted the family over their faith.

A woman wearing a face mask is overcome with emotion at the scene where a man driving a pickup truck jumped the curb and ran over a Muslim family in London, Ontario, Canada June 7, 2021. Police say the attack was a targeted anti-Islamic hate crime. (Carlos Osorio/Reuters)

Leah West, an assistant professor of international affairs at Carleton University, told CBC's Power & Politics that proving motivation is key to meeting the threshold for a terrorism charge.

"You're going to need a thorough investigation of this person's motivations before we would potentially see any type of terrorism charges," said West, a former national security lawyer with the Department of Justice.

Investigators are likely now gathering that information and combing through any electronic records for evidence of motivation and planning, said West.

When police search for evidence after an attack, however, they always face the risk that it has been destroyed or will be difficult to decrypt.

Christian Leuprecht, a professor at the Royal Military College of Canada and Queen's University, said it's extremely costly to monitor extremist behaviour online.

"There are very difficult choices that security agencies have to make on a daily basis about what resources they allocate to which individuals and which groups," he told Power & Politics.

"Inherently, there's always the risk that somebody is just going to slip through the cracks or there are individuals who just don't show up on the radar."

Nesbitt said the fact that a terrorism charge isn't laid immediately after an act of violence doesn't mean it won't be later. It often takes time to gather evidence to support a terrorism charge, he said, while murder is easier to prove and comes with the harshest punishment.

Still, he believes it's worth pursuing when there's evidence.

"Law has a communicative function and I think it's important to recognize the crime in instances where it has taken place," he said.

Prosecuting terrorism charges in Canada has so far turned out to be easier than laying them in the first place.

According to Nesbitt's research, close to 60 individuals have been charged with one or more terrorism offences. As of 2020, 26 people have been convicted or have pleaded guilty to terrorism charges since 2001.

Others have been charged in absentia without much hope of a conviction, have been acquitted. Fewer than 10 cases are still before the courts.

The rate of guilty verdicts is consistent with rates for other serious crimes, said Nesbitt.

Even if a terrorism offence isn't laid, it can be used in sentencing to argue for a tougher penalty, he added. 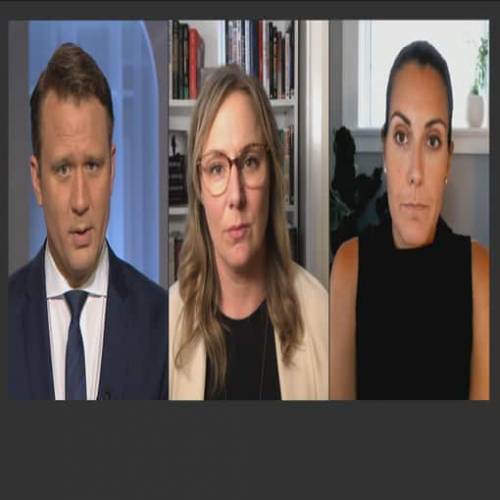 1 day ago9:47Former strategic analyst with CSIS, Jessica Davis, and former national security lawyer with the Department of Justice, Leah West, weigh in on what is known so far – and the bar for potential terrorism charges. 9:47

There are two things Ottawa could do if it wants to make the law more useful to investigators in this space, said Nesbitt.

The first, he said, would be to improve law enforcement's capacity to investigate terrorism cases — especially those involving perpetrators who seem to have acted alone and are not tied to established terrorist groups.

The federal government should also do a better job of defining "ideologically motivated" in law, he said.

"To date, we don't have a definition in either the Criminal Code or from a court judgment defining what ideologically motivated means," he said.

"So if I was the Department of Justice, if I was a lawyer, if I was a politician, I would be looking really hard at whether we could help our investigators by giving a little more certainty as to what 'ideological' or 'political motivation' means."

Previous : BREAKING Teenager shot in head dies as police launch murder probe
Next : Kids are learning more about residential schools than their parents, but experts say it can’t be a ‘one-off’