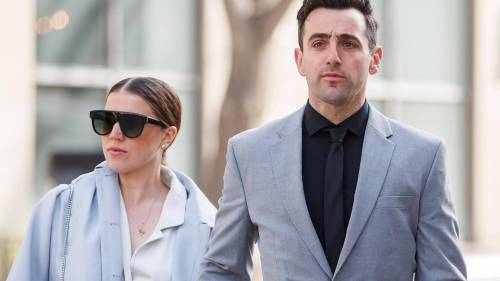 WARNING: This article contains graphic content and may affect those who have experienced​ ​​​sexual violence or know someone affected by it.

A woman who alleges she was raped by Canadian musician Jacob Hoggard in a Toronto hotel room more than five years ago is expected to take the stand again today at his sex assault trial.

The Ottawa woman, who is the second complainant in the trial, testified earlier this week that she came across the Hedley frontman on the dating app Tinder in November 2016 and, later that month, agreed to meet him to have sex.

She said once she joined him at a hotel, Hoggard raped her anally, vaginally and orally, and at one point choked her hard enough she thought she might die.

Defence lawyers have suggested she was injured during consensual sex and made up rape allegations after Hoggard lost interest in her.

3 days agoDuration 2:04An Ottawa-area woman is the second accuser to testify about alleged sexual abuse endured at the hands of Hedley frontman Jacob Hoggard.

Hoggard has pleaded not guilty to two counts of sexual assault causing bodily harm and one of sexual interference, a charge that refers to the sexual touching of a person under 16.

The other complainant, who was 16 at the time, has testified Hoggard raped her vaginally and orally, and attempted to do so anally, in September 2016.

An agreed statement of facts says Hoggard had a sexual encounter with each complainant on separate occasions in the fall of 2016.

Support is available for anyone who has been abused or assaulted. You can access crisis lines and local support services through the Ending Violence Association of Canada database. The Canadian Women's Foundation's Signal For Help is a silent, one-handed gesture to use in a video call to indicate that you are at risk of violence at home. ​​If you're in immediate danger or fear for your safety or that of others around you, please call 911.