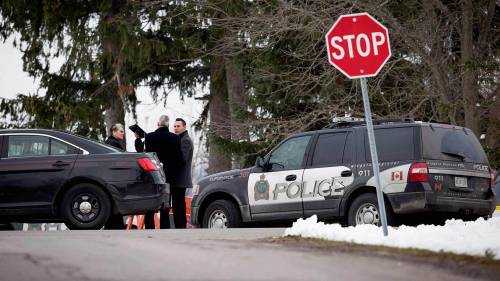 ‘It was either me or him,’ says Niagara police sergeant who shot fellow officer, as trial begins

Det.-Sgt. Shane Donovan testified Tuesday it was "either me or him" when he fired at least 10 shots at his fellow Niagara Regional Police officer, Const. Nathan Parker, in November 2018.

Parker had attacked him with "haymaker" punches and pulled out his baton, then his firearm, Donovan told the court, causing him to fear for his life and pull the trigger until Parker went down.

"I knew if he got the firearm up on me, then he would kill me — and it was either me or him," Donovan said. "So I fired my gun until he dropped his gun."

The sergeant's testimony took up most of the first day of the judge-only trial at the Ontario Court of Justice in Hamilton.

But while Donovan is the person who fired the shots, Parker is the one on trial.

The 55-year-old is charged with assault with intent to resist arrest, assaulting a police officer and assault with a weapon, which court heard covers a service-issue baton and sidearm.

This police officer has a history of violence. Now he's on trial for assault

Parker attended the courtroom in person Tuesday, wearing a blue suit jacket and khaki pants, sitting with his eyes closed during much of the testimony. The only time he addressed the court was to plead not guilty to each charge.

Donovan was in charge of the collision reconstruction unit and was part of a team examining the site of the crash at the rural intersection of Roland Road and Effingham Street in Pelham, Ont., about 20 kilometres west of Niagara Falls,.

A police officer was shot by another officer. But he's the one accused of assault

7 months ago1:38In a bizarre and unprecedented gunfight back in 2018, a police officer from Niagara Regional Police in Ontario shot a fellow officer 10 times. Mark Kelley of The Fifth Estate has the story of the shooting and how officers with serious disciplinary records can stay on the job. 1:38

The sergeant told court he had never met Parker before that day, but had seen him in passing at the police station.

What brought them together that day was a request from Donovan for uniformed police officers to help barricade the winding road near the crash scene, to keep the investigators that were analyzing it safe.

A miscommunication began between the two over who was covering the barricade. Donovan said Parker left his post while Donovan was away refuelling and picking up food. When Donovan returned around noon, he saw a resident driving through on the road that was supposed to be closed.

Court heard recordings of calls between Donovan and police dispatch over Parker's whereabouts, as well as calls from Parker to dispatch, requesting someone take his place.

Donovan testified that he had not communicated with Parker directly.

Parker arrived back at his post around 12:13 p.m., according to Donovan; he said he approached Parker's vehicle on the passenger side and asked him not to leave the scene again.

"In a very loud, aggressive voice, he told me that he had to go for a piss," Donovan told the court. "I just asked him politely if he could stay or let me know if he has to leave again."

The sergeant said Parker responded by swearing and telling him that if he had turned on his radio, he would have known.

"I said, 'You do know you're speaking to a sergeant,'" said Donovan, adding he was hoping to calm things down.

Crown prosecutor Jeremy Tatum had earlier asked the sergeant about his size, with Donovan responding that he stands just under 5-7 and weighs roughly 188 pounds. Tatum then asked about Parker in comparison. 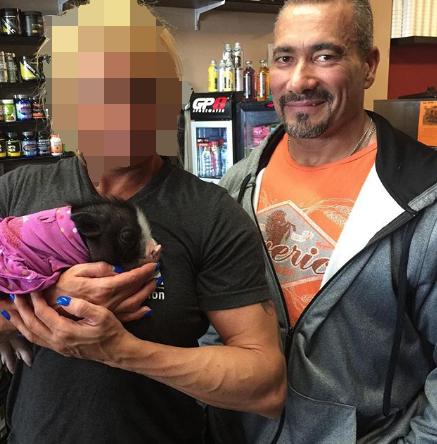 The sergeant told the court that following their exchange, Parker got out of his cruiser and the two walked toward each other, meeting near the front of the car. Donovan said he expected he'd get yelled at.

Instead, he testified, Parker gave him a two-handed push to the chest.

"It was extremely hard to me; pushed me back quite a few steps — and I was shocked."

Donovan said he responded by telling Parker he was under arrest for assault.

"It just came out. It caught me off-guard; I didn't expect it, especially from another police officer."

The sergeant said that Parker didn't stop; instead he came toward him, throwing a "haymaker" punch.

Donovan told the court he backed away, put his hands up and tried to walk away to end the confrontation, heading toward his own cruiser. But as he reached for the door handle, he said he saw Parker swinging again.

Donovan said he managed to partially block two punches and threw one of his own. Then, he testified, Parker pulled out his baton.

"My training kicked in," said Donovan.

The sergeant said he believed he would be killed if the baton hit him in the head, so he pulled his gun.

"My belief was that my life was in danger. He's already attacked me, hit me three or four times."

Donovan told the court that once he pulled his gun, Parker said, "Oh you want to do this" and went for his own sidearm. 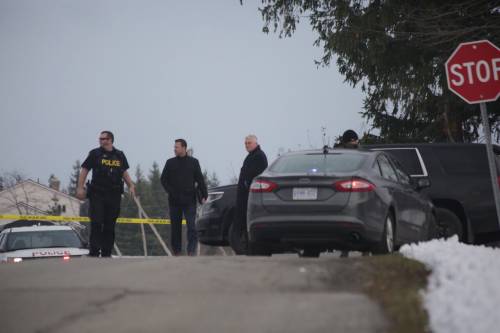 What followed happened in a matter of seconds, the sergeant said. Once Parker cleared the holster, Donovan said he started firing at Parker, who was standing about 10 feet away; he said he was not willing to wait until his fellow officer raised his firearm.

When Tatum asked how many times Donovan believes he fired, Donovan responded he believed he hit Parker nine times.

Medical records referenced in the agreed statement of facts say Parker had a gunshot wound through his cheek and nose, his left shoulder and into his upper thigh; four gunshot wounds on his left calf; one on his left hip; a gunshot entry wound on his lower abdomen and one wound near the back of his right foot.

Ten shell casings were found at the scene, all from Donovan's firearm.

Donovan told the court Tuesday that he had never used his firearm on a member of the public or another police officer before that day.

Donovan's testimony is scheduled to continue Wednesday, with the defence expected to begin cross-examination.

With files from Samantha Craggs