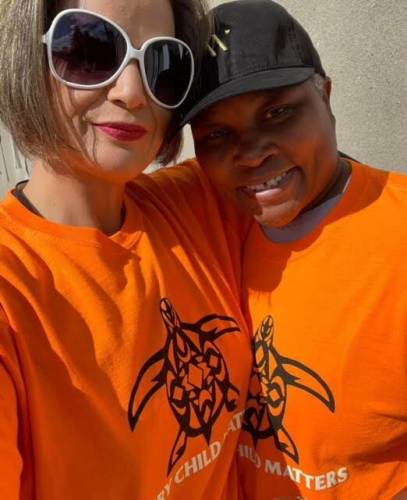 Hollee George, 44, describes her two-day experience at LHSC in November 2020 as terrifying and dehumanizing. What began as an appointment for a routine endoscopy ended with the hospital wanting to discharge George in the middle of the night with no personal belongings and nowhere to go.

She also says she overheard offensive comments and was treated with a lack of trust. The LHSC won't comment on the case due to confidentiality rules but says it's committed to an inclusive environment.

"My story is the story of many," George told CBC News. "The systems that we deal with every day, as Indigenous people, as two-spirit people, are so harmful, spiritually and physically."

George's treatment constitutes discrimination based on her race, colour, ancestry, ethnic origin and creed, as well as sex and disability, the filing with the Ontario Human Rights Tribunal alleges.

George is a member of Chippewas of Kettle and Stony Point First Nation. She belongs to the Sturgeon Clan. She was raised in Sarnia and now lives in Kitchener-Waterloo with her wife.

She is visibly Indigenous, has a prominent tattoo featuring Indigenous art on her chest, and wears a medicine pouch around her neck. She is also a medical cannabis user.

Throughout her stay at LHSC, nurses and doctors treated her as if they didn't believe the seriousness of her condition, assumed she was faking it and insinuated she was lazy, deceptive and a drug addict, George told CBC News.

'This is not just my harm'

"This is not just my harm or my experience. I'm just using it to bring it to the forefront, to affect systemic change, because truly, nobody should have to deal with what I had to deal with."

"Often, it's things that are more subtle, that are harder to point to," Beamish said. "Generally, people who have been experiencing that kind of subtle discrimination their whole life know it when they see it. People without those lived experiences, they don't see it. Often it's not intentional, it's often not even conscious. Discrimination can exist in the application of what you think are neutral policies."

After being put under for her endoscopy, George expected to be released an hour later. Her dad was waiting for her in the hospital parking lot to take her home to Waterloo.

When she woke up, it was to the feeling of hands on her legs and genitals, inserting a catheter.

"I was unable to move my body, open my eyes, or speak, no matter how hard I tried," George wrote in her human rights complaint. "I felt violated and scared by what was happening…. This approach is especially inappropriate with a two-spirit Indigenous woman patient."

Hours later, her dad was told that the care team had ruled out a stroke, but that George would be kept overnight. Her father took her coat, purse, phone and wallet back home with him.

At one point, George overheard two people talking about her medical cannabis use, saying her prescribed dose is "all she admits to" and questioning "how do you do anything all day?"

"These statements would have been cruel and inappropriate coming from health-care workers to a patient in any context," George wrote in her claim. "However, it is difficult to overstate the harmful impact they had on me in those circumstances, where I was in genuine fear for my life and could not advocate for myself and believed that my well-being was wholly dependent on the efforts and diligence of the health-care workers treating me."

Others questioned whether George had not disclosed drug use, or whether she had a mental health condition for which she was trying to get admitted. Someone also suggested she feared abuse by her father.

"There was a systemic belief amongst members of the health-care team that I was faking or exaggerating my symptoms," George wrote.

At around 1 a.m. ET, the hospital called her father to pick her up. He was unable to do so. George was told that she would need to be discharged and that she could go to the nearby McDonald's to wait for someone to come get her.

"I was stunned…. The hospital was trying to discharge me in the middle of the night in near-freezing weather, without a coat, identification, phone, vehicle or money, over an hour's drive from my home in another city while I was weak and exhausted," George wrote.

When she told nurses she didn't feel safe to leave, the nurses told her it was hospital policy, George said.

George refused to leave the hospital and eventually waited for her dad in the waiting room.

'We are on a journey to do better'

LHSC is unable to comment specifically about George's case, but told CBC News it is committed to improving the patient-care experience and creating an environment that is inclusive to all those who come into the hospital.

"We are on a journey to do better. We acknowledge there is still work to do, but we're sincere about working with our Indigenous partners to create services specific to the Indigenous patient population," the hospital wrote in a statement.

The hospital pointed to an Indigenous Healing Space at Victoria Hospital that opened in 2020 in partnership with Atlohsa Family Healing Services. "Any Indigenous patients and family members are able to access the healing space for greater cultural connection while at LHSC."

The hospital employs people to support Indigenous patients and says it is committed to improving those programs.

Among other remedies, George wants changes to LHSC's discharge policies to make sure people can make arrangements for a safe ride home.

She also wants to speak with those involved in her care to tell them how it impacted her and for LHSC to change its critical-incident review process. A critical incident is currently defined as physical injury or harm.

"The idea that unless someone left a scalpel inside you during surgery it's not a serious injury or harm, that's just completely missing the mark in terms of what discrimination means for people's lives," Beamish said.

The hospital must hire an Indigenous patient relations specialist to help with complaints, and a patient navigator to advocate for patients, the human rights claim states.

LHSC should educate its doctors, nurses, and staff, and develop an Indigenous health strategy, in partnership with Indigenous patients and health experts, the claim asks.

"They need to do more than fixing things when something bad happens. They need to be proactively making sure this stuff doesn't happen and, even more than that, proactively transforming those systems and institutions," Beamish said.

"There needs to be an understanding of the really deep, fundamental ways that the mainstream health-care system is just not working for Indigenous people."

George is also seeking $175,000 in damages. She is accepting donations to help pay for the legal costs of the human rights claim at twospiritjustice@outlook.com

Previous : Flood management in B.C. is left up to municipalities. Should it be?
Next : Mobility scooter driver holds up traffic in middle of road while waiting for chips