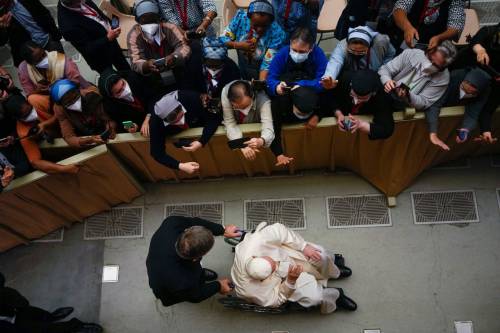 Indigenous leaders in British Columbia expressed disappointment Friday that Pope Francis' trip to Canada will not include a stop in their province.

Pope Francis will be in Canada from July 24 to 29, making stops in Quebec City, Edmonton and Iqaluit.

The absence of any B.C. stops on the itinerary is not lost on Chief Rosanne Casimir of Tk̓emlúps te Secwépemc where the discovery of more than 200 potential burial sites on the grounds of the Kamloops Indian Residential School triggered investigations on other sites across Canada.

"This is a missed opportunity to come to 'ground zero' and hear directly from the survivors, intergenerational survivors and offer more words of apology, retribution and reconciliation," Casimir said in a statement.

In a statement, Terry Teegee, regional chief of the B.C. Assembly of First Nations, called on the Pope to revise his plans.

"This egregious oversight must be rectified immediately," he said in a statement.

Archbishop Richard Smith, the co-ordinator of the papal visit to Canada, said the trip has been limited to only three "hubs" because of the Pope's mobility issues.

The 85-year-old pontiff recently cancelled a scheduled trip to Lebanon and was photographed using a wheelchair for the first time.

Pope Francis arrives in a wheelchair to attend an audience with nuns and religious superiors in the Paul VI Hall at the Vatican on May 5. The 85-year-old pontiff recently cancelled a scheduled trip to Lebanon. (Alessandra Tarantino/The Associated Press)

"What's really directing this is the Pope's limited ability to get around," Smith said from Edmonton on Friday.

"The Vatican was very, very clear: when he comes to a country, he can't get around by helicopter, he can't be in a car any more than an hour, he cannot be in a different place every night."

Federal Indigenous Services Minister Patty Hajdu said Friday that the government welcomes the Pope's visit, but that plans for the places he will visit are up to the Vatican.

There are 139 sites of former residential schools across Canada, most of them run by the Catholic Church. Pope Francis is expected to visit some of them and repeat the apology he gave when visited by Indigenous leaders in Rome.

Casimir is disappointed the Pope has no plans to visit the site of Kamloops Indian Residential School, the largest residential school in the country run by the Roman Catholic Church, or other sites in the province where unmarked graves have been found.

"He hasn't acknowledged invitations to really come and meet with us and to really walk on those meaningful steps going forward," she said.

Casimir said there is an open invitation for the Pope to visit the site at any time, noting there is an airport within 15 minutes of the community.

Support is available for anyone affected by their experience at residential schools or by the latest reports.

With files from Michelle Ghoussoub and Olivia Stefanovich

Previous : First net-zero flight across the Atlantic could set off from UK next year
Next : Russian tennis chief brands Elina Svitolina a ‘nobody’ as he hits back at Ukrainian star