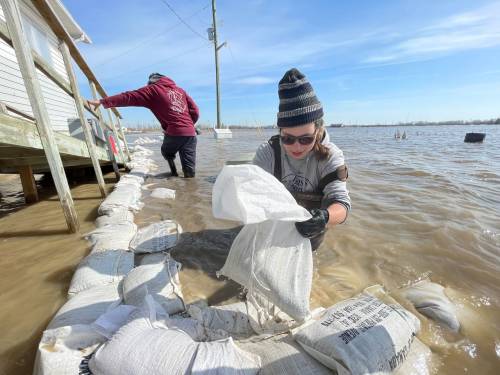 The water was quick, unforgiving.

In a matter of days, the flooding on Peguis First Nation, believed to be the worst the community in Manitoba's Interlake has ever seen, displaced roughly 1,600 people and ravaged hundreds of homes. Peguis has 3,521 members usually living on reserve and 6,504 off-reserve members.

The largest First Nation community in Manitoba is no stranger to flooding — over the last few decades, residents have been chased from their homes by rising waters several times — but that wasn't always the case.

A few generations ago, the community lived on prime farmland just north of Winnipeg, far from the flood-prone delta on the Fisher River about 160 km north of the capital city where it is today.

And in a way, the story of how they were pushed so far north into Manitoba's Interlake region — a move motivated by racism and propelled by a dubious vote — is the story of Manitoba, said Niigaan Sinclair, a professor of Indigenous studies at the University of Manitoba.

"You can map Manitoba by the removals of Indigenous peoples. So the story of Peguis is unfortunately not abnormal," said Sinclair, who's also a member of the First Nation.

"But it is particularly awful for myself in that I witness my relatives every year having [a] massive amount of property damage, their livelihoods being consistently under duress, and the fact that it's just impossible to make a way of life … in this territory that we've been forced to live upon."

At the turn of the 20th century, land just northeast of Winnipeg was known as the St. Peter's Reserve — a predecessor to today's Peguis First Nation. Today, the area is home to the city of Selkirk.

The people of St. Peter's were successful farmers, said Karen Froman, an assistant professor at the University of Winnipeg who teaches Indigenous history.

But an idea persisted among settlers that First Nations were incapable of using the land properly.

"There was pressure and resentment on the part of the settler population to remove Indigenous peoples from productive, valuable land," said Froman, who is Mohawk from Six Nations of the Grand River.

"It's racism, pure and simple." 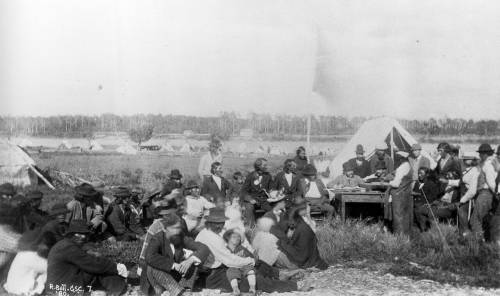 People are pictured on the former St. Peter's Reserve sometime around 1880 in this archival photo. The people of St. Peter's were forced to move to the present-day site of Peguis First Nation following a 1907 land surrender later deemed illegal. (Robert Bell fonds/Library and Archives Canada)

When the growing nearby community of Selkirk experienced an economic boom, government officials began condemning the reserve as "a drain on the prosperity of the district," she said.

So in 1907, they devised a scheme for the reserve land to be surrendered — though the people of St. Peter's "utterly opposed it," Froman said.

By all accounts, the vote on whether the First Nation would give up its land to the government "was pretty shadily done," she said.

The vote was held in September, when many members were away hunting, fishing and trapping, and was scheduled on short notice, Froman said. Many St. Peter's residents weren't able to fit into the small schoolhouse where the vote was held.

The vote itself was also confusing, with an official at one point telling voters to choose a side based on who wanted $90 — not who wanted to surrender their land — though it was unclear which line people were even supposed to stand in, she said.

Still, Froman said, the outcome was close: 107 in favour, 98 against. It wasn't a majority of the 233 eligible voters. But the government decided it had won the majority of the vote, though no record was kept of who was voting, Sinclair said. 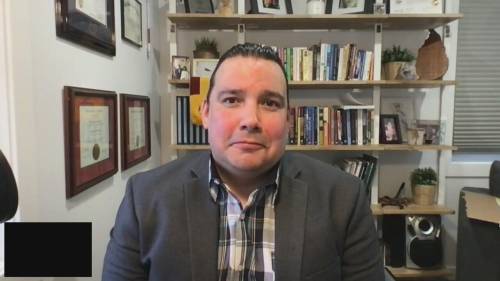 Niigaan Sinclair is a professor of Indigenous studies at the University of Manitoba and a member of Peguis First Nation. (CBC)

"You cannot call that a vote. That was a sham," he said. "The land was stolen, period."

The St. Peter's Reserve was dissolved, and its people forced from the site where they'd been for generations to a new one selected by the government, Froman said.

A new home — for some

What awaited the newly-established Peguis First Nation — named after Chief Peguis, who had led a band of Saultaux people to establish a settlement at Netley Creek and later at St. Peter's — was a far cry from the thriving community they once knew, Froman said.

There were no houses, no schools, no churches, or even any roads.

"They took one hell of a backward step when they moved," said Bill Shead, whose great-grandfather, William Asham, was a former chief of St. Peter's who was at the meeting when the vote was held.

It was "scrubland, poor land — sort of marshy and no real big trees."

But others refused to leave, Froman said.

Some First Nations people who stayed undertook enfranchisement (a process of giving up First Nation status under the Indian Act), while some Métis people applied for scrip in an attempt to hold onto their land. But many ended up losing it anyway, she said. 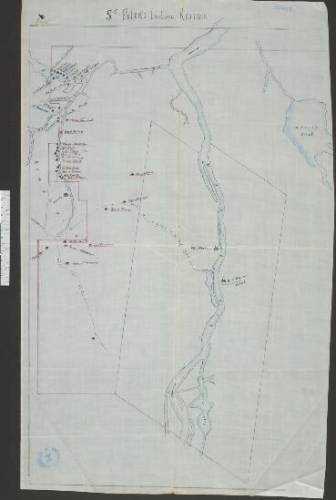 A map shows the St. Peter's Reserve in its original location, which the city of Selkirk calls home today. (Department of Indian Affairs and Northern Development fonds/Library and Archives Canada)

Others refused to leave outright, instead facing legal consequences.

Trevor Greyeyes said that's what happened to his family, who are from the nearby former Netley Creek First Nation, which the government combined with St. Peter's Reserve to save money after Treaty 1 was signed.

That decision meant their lands were included in the illegal surrender, though they occupied the marsh area until they were arrested for trespassing in 1931. At a trial the next year, they got two choices: move to the new Peguis First Nation site, or go to jail.

"As you can imagine, there were quite a few people who said, 'Well, I'm moving,'" Greyeyes said.

"There were a number of them who refused to. So those men were jailed." 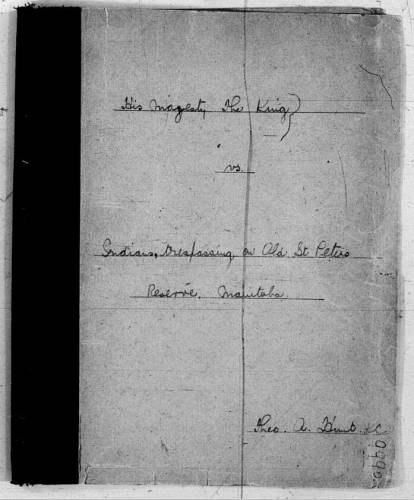 A court document reading 'His Majesty the King vs. Indians Trespassing on Old St. Peter's Reserve, Manitoba' is pictured. (Submitted by Trevor Greyeyes)

Though the land surrender was declared invalid in 1911, that ruling was ignored by government officials who insisted the First Nation relocate, Froman said.

"The rationale and the explanation provided by officials, and that's actually been absorbed as part of the settler mentality, was the lie, the fiction that the people of St. Peter's willingly sold and abandoned their land," she said.

"The people did not go willingly, despite the historical narrative … that people just sort of bowed their heads in obedience and shuffled off quietly to the bush."

But despite all that happened, the people of St. Peter's — now Peguis — didn't nurse a grudge, Shead said.

"They got on with their lives and rebuilt a community, in very difficult circumstances, that has prospered," he said, remembering his own grandparents' house, built with logs from the forest on the new reserve. 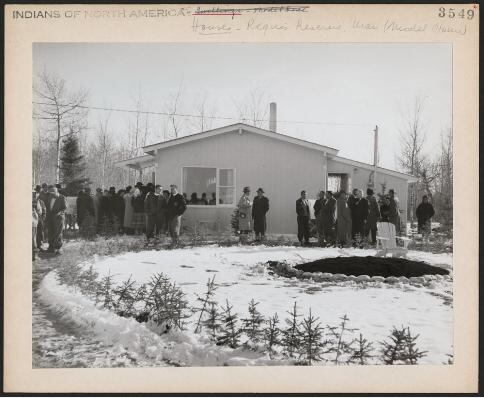 After being forced off their original land, the people of current-day Peguis First Nation built a new community for themselves. The 1960 opening of a model home on the First Nation, built entirely by teenagers as a school project, is pictured in the nearby community of Hodgson. (Department of Indian Affairs and Northern Development fonds/Library and Archives Canada)

And they didn't stop there. In 2009, they voted to accept a land claims settlement worth $126 million to compensate for the land stolen over a century earlier.

"[They used] their ability and their smarts to get educated and to seek compensation for past wrongs, using our system, education and the rule of law."

But today, the community is still dealing with the aftermath of being relocated to such a flood-prone area, said Chief Glenn Hudson, repeating his call for long-term flood mitigation measures in the area.

"We deserve better, especially when our land was taken from us illegally," Hudson said.

"People need to understand and know the history of how our lands have been swindled from us." 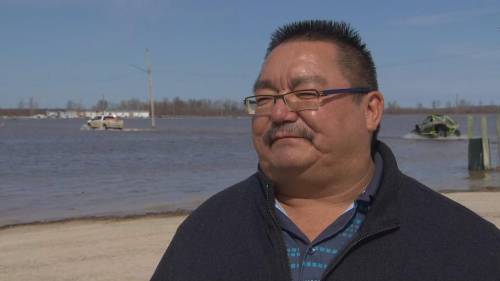 It's a sentiment shared by elder and Peguis First Nation member Ruth Christie — not just to make people aware of her community's history today, but to make sure its stories are preserved for tomorrow.

"The elders that knew these stories, they're passing away now," Christie said.

"If the young people aren't interested in the history of their people … that history will be lost."