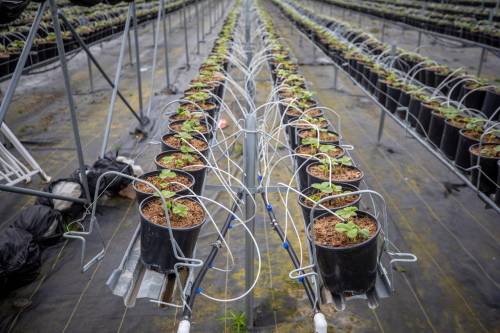 Sajan Mandair walks through rows of strawberry plants at his Abbotsford, B.C., farm, but just a few of them are starting to flower — a sign that they're several weeks behind in their growth cycle.

"It's been a challenge because of the cold weather," he said. "It's really stunted the growth of all the plants and it's really slowed down the season for us."

Excess rainfall has also made it harder to work in fields and plant because of the mud.

"It'll be sunny for a day or two and once you get everything ready to go with your tractors, it's raining again," said Mandair. "We've been a little bit late on planting this year."

A row of strawberry plants at Mandair Farms in Abbotsford on May 12. The plants are several weeks behind compared to their usual growth. (Ben Nelms/CBC)

Farmers in the Fraser Valley are grappling with temperatures 2 C below the seasonal average, which has set a number of crops — including blueberries, strawberries and raspberries — about three weeks behind their usual schedule.

The delays could prove costly for farmers like Mandair, who fear the slow down will result in greater competition from international growers come harvest time.

"We need to get the local supply into the market place," he said. "If we don't do that, there's other countries that come in and they're able to take that market share."

Cool weather is just the latest challenge farmers in the region are grappling with. Many still haven't recovered from the aftermath of both the heat dome and historic flooding last year, and exceptionally high fuel prices, which are driving up operating costs.

"We just can't seem to catch a break," said Lenore Newman, the director of the Food and Agriculture Institute at University of Fraser Valley.

"It's been steady with heat domes and floods and fires, and now it's too cold — and it is significantly too cold." 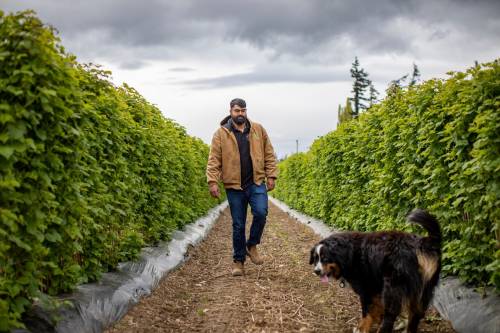 She also forecast May to stay chilly.

"The outlook for the second half of May is still cool. We're still under the influence of La Nina, so likely our average temperatures will come in below seasonal over the next few weeks," said Wagstaffe.

"It's not a cure all … but as the climate becomes increasingly unpredictable, we are going to see more crops growing indoors — and we're also going to see crops grown here that we used to import," she said.

Newman said that California is losing agricultural land due to drought and heat, meaning other regions, like B.C. may have to take on growing what California can't.

Farmers like Mandair, are already investing in measures to help them grow under more unpredictable conditions. He has put in place protective high tunnels, known as hoop houses, for some of his crops. 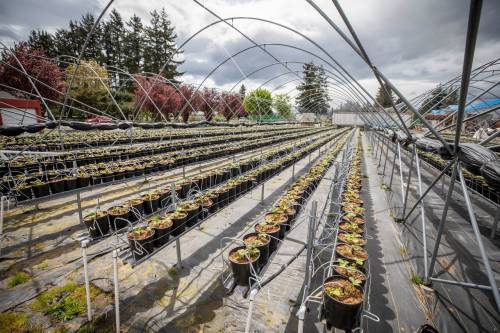 The skeleton of a hoop house arcs over rows of strawberry plants at Mandair Farms. (Ben Nelms/CBC)

"We have to figure out a way not to rely on all these other elements," he said. "That's why I'm trying to do all these different hoop houses, trying to do other ways to produce, and try to cut the variables out."

In the meantime, with many producers in the valley still recovering from the heat dome, and floods, Mandair said it's more important than ever to support local farmers to ensure revenues.

He said farmers are working hard to grow food locally.

"All of us farmers want to supply the market … the population's growing, and we need to produce food for our people."

Previous : Jack Nicklaus says Saudi Arabian organizers offered him more than $100 million to be face of LIV Golf Invitational Series
Next : Reckless driver mowed grandad down as he walked home from pub ‘minding his own business’