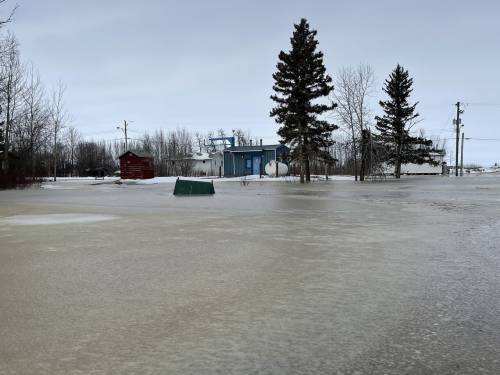 ‘Hard to up and leave your home’: More Hay River residents prepare to flee rising water

Since flood waters rose in her community, K'atl'odeeche First Nation Chief April Martel has barely slept except for a 10-minute nap here, an hour there, if she's lucky.

Volunteers are hard at work on the reserve, going door to door to ask residents to leave their homes early, pack the essentials and bring sleeping bags if they have them.

"It's really hard just to … up and leave your home," said Martel, who is on the phone constantly to make sure community members are safe, fed and getting to higher ground.

Before she gets some fleeting rest, she group texts a crew of volunteers and firefighters.

"I let them know, 'I'm going to take a nap. Can you watch the community?'"

Rain and snow has made matters worse for flooding on the K'atl'odeeche First Nation reserve. (Loren McGinnis/CBC)

K'atl'odeeche First Nation has started the state of emergency paperwork for people on reserve and those who live in town.

Part of the flood response, Martel said, is getting the word out to ministers and the N.W.T.'s member of Parliament, "letting people know this is happening in our communities and we can't be ignored. We need help."

The community relocated people from the Judith Fabian group home with the help of the Dehcho Health and Social Services Authority and some ministers.

Large families are in hotels and the wellness centre. 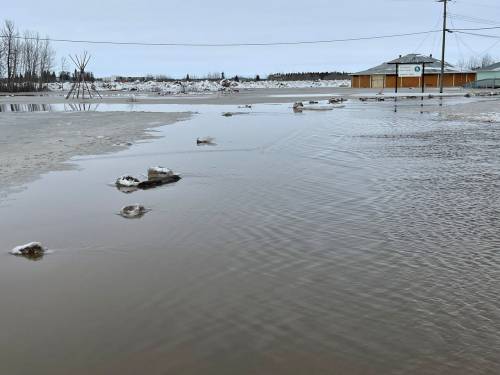 Flooding has pushed community members out of their homes and up to higher ground. Getting everyone to safety is a major effort. (Loren McGinnis/CBC)

Elders were the very first to be brought to safety. They have been put up in the Dene Wellness Centre, the Dene Cultural Institute, hotels and an Environment and Natural Resources building.

Elders are talking about how the river's watermark has never been so high, said Martel.

"Climate change takes a big part in this…. we don't know how to predict the ice and the water like they used to long ago," she said. 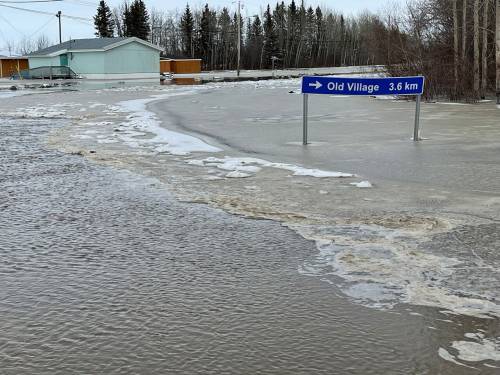 Martel points to sheds with flooring entirely underwater and a new unit, which had been high off the ground, being washed away.

Navigating the flooded area is difficult and Trailbreaker host Loren McGinnis is slipping around in his gumboots because the water is so deep.

Biking past him, community member John Smallgeese inquires: "Any beavers yet?"

There is so much water everywhere and the rain and snowfall is not helping, said Martel. They're trying to create escape routes for the water to go somewhere else.

"It's not happening. The machines can't keep up," she said.

Martel said she and a team of K'atl'odeeche's municipal services, volunteers, fire and emergency workers will help people leave in case the flooding gets worse.

But even homes that are on high ground are advised to leave while they can because waiting to leave could put the lives of firefighters and first responders at risk, said Martel.

Beatrice Lepine's two dogs Willow and River are getting ready for their third walk of the day.

"They're living in my car while I'm staying in the motel because we've had to evacuate," she said. 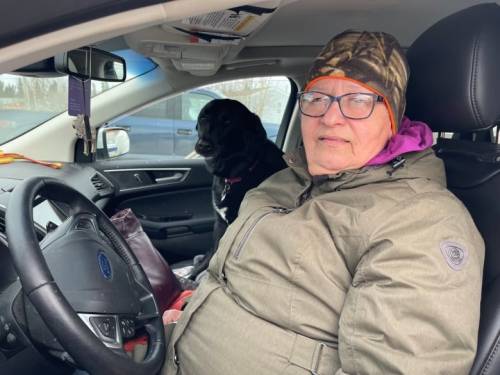 Beatrice Lepine was born and raised in Hay River's Old Town, on the east side of Vale Island. (Loren McGinnis/CBC)

It's decked out with fleece blankets and it smells like dog but they're happy, said Lepine.

The Town of Hay River is canvassing people who have left their homes about how many pets they had to leave behind.

Lepine said she has lived on the island and finds this year's flooding unusual.

"In my years of living here and being born here, I've never heard of the new town being affected like this, the threat of flooding."

In fact, that's why they built on higher ground, after a 1963 flood "completely wiped out" the Old Town.

Her neighbours are keeping their eyes on her home and, so far, it's just water in the yard.

In the areas around Hay River, some residents are facing severe damage to their homes.

"What happened at Paradise Valley is just a tragedy. So I'm hoping for a good outcome that this water eventually gets out to the lake," said Lepine. 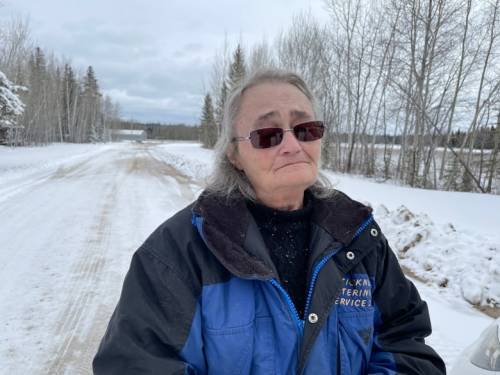 Rita Perron said the flooding in the valley is tough to believe. (Loren McGinnis/CBC)

Rita Perron said the flooding is just breaking her heart.

She has lived in Paradise Valley for 50 years.

"I can tell you how every business started, how they built our house. Some of them I even helped them to build, with my husband. I don't know what to say."

"If I let myself, I'd bawl my head off right now," she said. 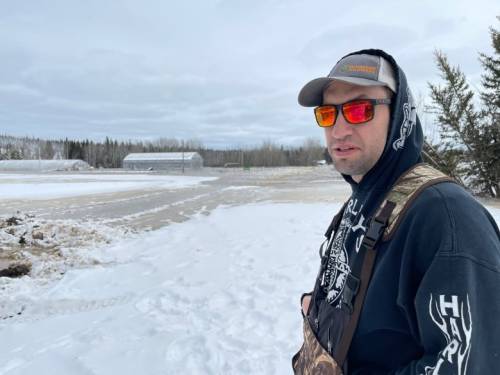 Alex McMeekin runs Riverside Growers and, while he's hopeful they can rebuild, is uncertain about the future. (Loren McGinnis/CBC)

Alex McMeekin runs Riverside Growers with his wife Cynthia and they have spent three seasons on their property. Agriculture is "very deeply rooted" in Hay River and especially in Paradise Valley," he said.

They started growing leafy greens in their greenhouses as a way to localize food production and tackle food insecurity in the North.

The flooding has made their future uncertain. 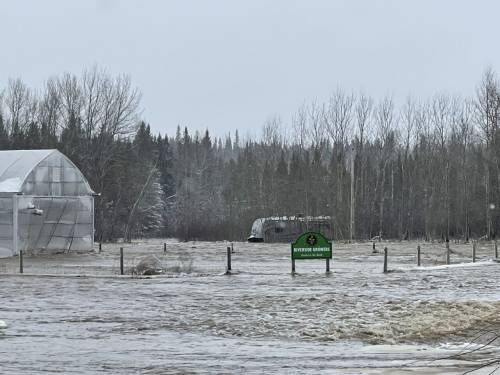 "We're looking at a river running across our property," he said.

"We don't know. We might be fortunate. We have hope for now and if we can rebuild and move forward, we will."

McMeekin said the community has stepped up to help each other out.

"They call it Paradise Valley for a reason. Everybody gets along well and it's a real good sense of community here."

With files from Loren McGinnis

Previous : Golfer Matt Williams’ mental health battle as he fought to help family during lockdown
Next : ‘My flat is so mouldy it spreads to furniture and clothes and makes my daughter itch’