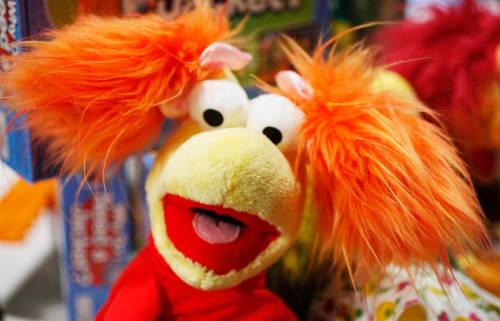 From the Rock to Fraggle Rock: N.L. director takes on reboot of iconic TV show

Jordan Canning is still reeling after her dream of working on a favourite childhood TV series came true.

The Toronto-based film and TV director, who is originally from St. John's, recently completed work on three episodes of Fraggle Rock, a hugely popular children's TV series from the 1980s that was shot in Toronto.

"Deep in my bones, I really wanted this job so bad," Canning said.

In a teaser released last week, it was announced that Fraggle Rock: Back to the Rock will air on AppleTV+ starting in January 2022. It's being produced in Calgary.

A diehard fan of the show and of its creator, the late Jim Henson, Canning said getting the opportunity to work on the series was surreal.

"When I got the job, it was a big, big, exciting moment," she said. "Just to get to work with the Jim Henson Company was like a dream."

Fraggle Rock is the latest in a long list of director credits Canning has amassed in her 15-year career.

After a decade of directing shorts and feature films, she forayed into TV, working on renowned series such as This Hour Has 22 Minutes and Schitt's Creek. Her work on a 2016 episode of Baroness von Sketch Show earned her the 2020 Directors Guild of Canada award for outstanding directorial achievement in a comedy series.

Following her interview for Fraggle Rock, Canning said she felt a kinship with the folks who work behind the scenes.

"I felt like I was talking to my people," she said. "I think puppet people are my people."

A peek into the world of Fraggle Rock

Fraggle Rock's five lead characters — Gobo, Mokey, Wembley, Boober and Red — inhabit their own miniature world beyond the one occupied by humans. Their distinct personalities (Mokey is artistic; Boober is superstitious; Red is adventurous, and so on) are an allegory for human diversity. Living together in Fraggle Rock, the characters must learn to cope with their differences, much as humans must do in the real world.

Canning said getting to peek inside their world was a fascinating experience.

"I got to work with Karen Prell, who was the original Red, and she was the puppeteer doing Red on the reboot," she said. "She's a total firecracker. She's amazing."

Fraggle Red, one of the five lead characters on the TV series Fraggle Rock, is returning to television early next year after ending in 1987. It's being produced in Calgary. (Mark Lennihan/The Canadian Press)

Canning said she was awestruck stepping onto the show's "epic" Calgary set.

"The sets are enormous," she said. "I mean, the scale of this show is incredible."

Though Canning says she's worked with puppets in the past, the skill and deftness demonstrated by the actors in Fraggle Rock were something she'd never witnessed.

"They're incredible, top-of-the-line performers," she said. "They're not only acting and puppeteering, they're learning songs, singing songs, doing dance choreography. It's kind of incredible how they do it.

"And everybody's living their dream. They're working for the greatest company in the world, making these amazing worlds and characters and actually being given the kind of space and creative freedom and resources to achieve these things, you know?"

With files from the St. John's Morning Show