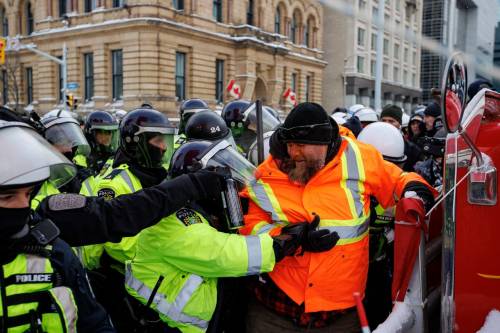 Several Freedom Convoy protesters say thousands of dollars of items seized during February's enforcement efforts are unaccounted for, and that getting back those items that are in police possession has been a laborious process.

The Ottawa Police Service (OPS) says they received 41 items from the city during the clean-up of the protests, which disrupted life in Ottawa's downtown for roughly three weeks earlier this year.

Items in the force's possession include generators, barbecues and space heaters that helped fuel and feed protesters in the city's core.

They're being stored at OPS's evidence control facility in the city's southeast. Police say six items have been returned to their owners, but 35 remain unclaimed.

"As with any property, the owner can provide proof of ownership to retrieve their item," OPS said in a statement. "Receipts, serial numbers, and photos of items are acceptable means of identifying the property."

According to some of the protesters, many of the items collected during the clean-up were either newly purchased or donated to the convoy participants.

How the end of the downtown occupation unfolded in Ottawa

David Paisley, who became a de-facto Freedom Convoy organizer during the protests and remains a celebrity among supporters due to his popular social media channel, Live From the Shed, said he's tried unsuccessfully to get back roughly $1,000 worth of banners he had made.

Paisley was arrested during the police enforcement — he essentially lived on Wellington Street throughout the protests and had a live feed going during his arrest — but was never charged.

When he went to retrieve his items, police asked him for the name of his arresting officer and a case number, Paisley said.

Paisley said he wasn't provided with any documentation containing that information, meaning he's come up short in his efforts to retrieve the signs — which he says hold both sentimental and monetary value.

"As best we can tell, everything was kind of thrown in trailers and taken out of there as quick as possible," he said, adding there didn't appear to be any system in place to track where seized items were being taken.

"Time was the overarching priority, so everything was very rushed."

Ben Froese, a crane operator who was parked on Wellington Street, is pepper sprayed while police enforce an injunction against protesters on Feb. 19. Froese says he can't track down the Canadian flag he flew from the crane. (Evan Mitsui/CBC)

Ben Froese operated a crane that flew a Canadian flag and was parked almost directly in front of Parliament Hill during the majority of the protests.

Froese said police caused roughly $2,500 worth of damage to his truck's cable during the enforcement action, and the location of the flag — one of the more memorable images from the protests — remains unknown.

"I still haven't heard if it was actually taken somewhere as evidence," he said. "My flag is still a big question mark as to what they did with it, if they just threw it out to the garbage, I don't know."

Not seized as evidence, says OPS

It's unclear where flags and other items that were seized ended up.

According to OPS, it received no tents, tables or chairs from the city. It's believed city officials — and possibly private contractors — responsible for cleaning the streets post-police action threw out.

Police say none of the items in its possession were seized as evidence and they aren't waiting for a judge's order to release them.

"If they truly only have 41 items in their possession, then either a significant amount of items were thrown out, or there's some contractor somewhere sitting on a large number of items," said Paisley.

Karl Duvall helped operate the Coventry Road camp and estimates thousands of litres of fuel, straw bales and other items were removed.

Duvall said he's co-ordinating with other organizers to create an inventory of unaccounted items, in the hopes of getting them back.

"There's a lot of stuff that shouldn't have been taken," he said, adding there were teams of people who tried to clean up during the enforcement — but police didn't allow it. 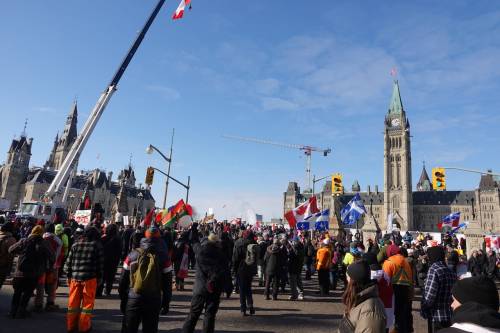 'There needs to be a fair system'

In its statement, police said they "actively worked to identify property owners" and that in some cases, items marked with a name and phone number allowed them to do that.

Organizers are contemplating searching city dumps to see if they can retrieve things like extension cords, power bars, chairs and tables that they believe were thrown out.

They also hope police will release the items so that they can ensure they're returned to their rightful owners.

Paisley said there's an expectation property will be protected by police and noted most of the people involved in the Freedom Convoy — including himself – haven't been charged with or found guilty of any crime.

"There needs to be a fair system for getting that property back. Unless there's some kind of justification for why those items are still in police possession, it seems inappropriate," he said.

"They seem to be wanting to be claiming due process now, but they skipped all the due process before. So to expect us to have receipts and proof of everything when they just came in and scooped it all up — it doesn't seem to be a fair trade-off."