Not unlike schools, the daycare sector has pivoted multiple times during the pandemic, adopting new health and safety protocols and overhauling different operations.

However, the Omicron variant has thrown a significant wrench into the industry that cares for Canada's youngest, who don't always get as much attention as their school-aged peers.

Though it was shuttered for a few months at the very start of the pandemic, the Montreal dental office where Dacosta works hasn't closed since. Her four-year-old daughter, Sofia, spends most of the day at daycare.

"If [daycare staff] weren't here for us … everyone would be at home," Dacosta said. "I think they're angels on Earth."

Diana Dacosta picks up her daughter, Sofia, from the four-year-old's daycare in Montreal on Wednesday. (Simon Martel/CBC)

The daycare field has adjusted relatively well during previous waves of the pandemic, according to Montreal daycare owner and operator Mona Lisa Borrega.

"Now with this new variant, the Omicron, it's gone out of control. It's really complicated. It is hyper-contagious. I've never seen anything like this," she said. "If the whole daycare has to shut down [to isolate], where do the children of the essential workers go? That is the problem, and the way this virus is spreading, you don't see it coming."

The child-care sector requires support and more clarity when it comes to communication about the changing COVID-19 guidelines, said Borrega, who is also vice-president of a provincial private-daycare group, Association des garderies privées du Québec, and a member of a committee monitoring the overall daycare situation alongside public health officials. 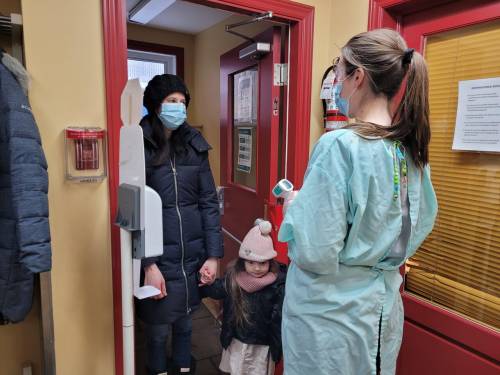 Things have changed drastically for the daycare sector amid the pandemic, including screening and temperature checks at the door. Parents are also unable to enter the facilities, as they did before COVID-19. (Submitted by Mona Lisa Borrega)

Frequent changes to the rules — Quebec's isolation requirements for the sector, for instance, have shifted three times in the past two weeks — create chaos, sow confusion and erode the confidence of families, said Borrega. "They're mixing everybody up and it's very dangerous not to follow very, very clear guidelines."

Families have put their faith into child-care centres during the pandemic, she said, dropping their kids off even when they're no longer able to see what these youngsters experience inside.

But, she said, "parents have to feel confident while they're at work that their children are being taken care of and not to worry.… This is not the case anymore. People are very worried all the time."

'Last sector to be thought about'

Though Momentum Montessori has been thankfully spared of any positive COVID-19 cases thus far, families and staff are concerned about recent guideline amendments, said Natalie Edwards, principal of the Toronto centre.

Many feel the reduced, five-day isolation period for those showing COVID-19 symptoms is too short, she said, especially with staff and students now also unable to access PCR testing, which had previously allowed for a speedier return to care.

Edwards is now weighing whether to stick with a longer isolation period for her centre. She's also secured 75 take-home PCR tests from an east-end Toronto hospital's back-to-school program, though was disappointed there hadn't been better, earlier communication that child-care centres could also access testing resources like it.

"We have been needed throughout this whole entire pandemic … and as much as we are needed, we're also kind of the last sector to be thought about."

Edwards pointed out that child-care workers deal exclusively with the only remaining group of Canadians ineligible for COVID-19 vaccines, who aren't subject to mask guidelines due to their age and who can be challenging to keep physically apart, even when separated into smaller cohorts. 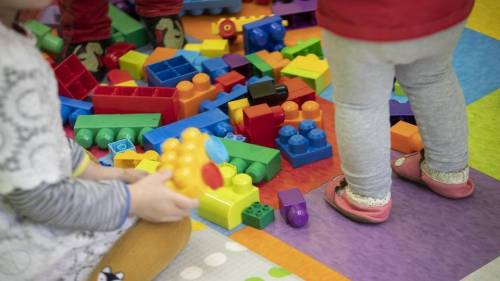 Kids under five are the only remaining group of Canadians still ineligible for COVID-19 vaccines. It's also not recommended that they wear masks due to their age and can be challenging to keep them physically apart. (Ivanoh Demers/Radio-Canada)

These days, she said, "it's almost instant panic if a staff member does call in sick.… How are we going to replace them? Because we just don't have sufficient supply staff to accommodate four or five staff members being off at a time.

"The pandemic has really changed the world of early childhood educators wanting to work.…They've really been discouraged to work in the field right now because of the conditions that we are given to work in."

Two University of Manitoba instructors — each a parent of two young children in Winnipeg — have also started digging into the current conditions of child care in their province. 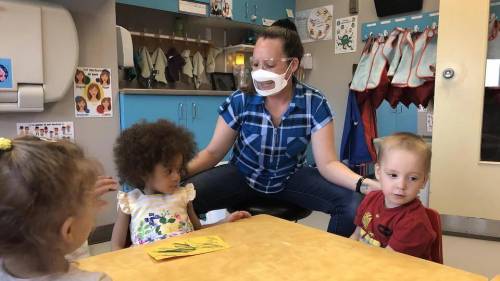 A daycare worker sits with young children in December. A survey of child-care workers in Manitoba earlier this month garnered responses from more than 330 facilities, representing more than 5,000 staff members and over 18,000 children. One professor behind the project said it garnered 'heartbreaking' stories and statements. (PIel Coté/Radio-Canada)

Working together with other colleagues at the university, they garnered responses from more than 330 child-care facilities in just a few days, representing more than 5,000 staff members and over 18,000 children. Respondents reported, for instance, widespread staffing shortages due to positive cases or close contacts isolating.

The survey's final, open-ended question — 'Is there anything else you would like to tell us?' — garnered "heartbreaking responses," Gerstein said.

"It is nothing new that the predominantly female workforce in this sector is underpaid, underappreciated and taken advantage of. That the government just assumes that they will be there to look after children.… They need government resources — 10 years ago, two years ago, last week, today," she said.

Even supportive parents may take for granted or fail to realize the full extent of the difficulties their daycares have faced throughout the pandemic, said Kelly, who counted herself among this group until she became a board member at her children's daycare just a few weeks ago. 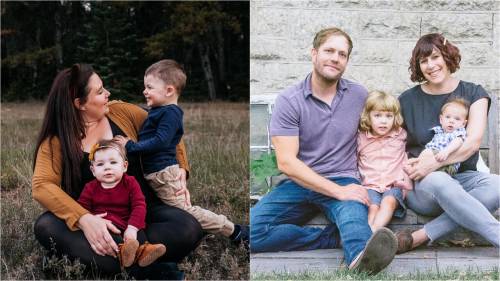 Lauren Kelly, left, is shown with her two young children, and Aleeza Gerstein, right, is shown with her family. The two University of Manitoba professors launched a survey in early January, asking child-care workers in the province about what they've been experiencing amid the current Omicron-driven wave. (Janelle Fournier/Sara Sealey)

"All of the extra time that goes into sterilizing all the toys that our goobery one-year-olds put in their mouths — [it's] all expected to fit into that already-small budget."

The pair hope the data they've gathered, and will continue to analyze, can inspire tangible support for the beleaguered sector.

"I'm hoping that they hear this call for urgent action at every level of government in the country," Gerstein said. "There's a lot of people that feel very on their own and very unsupported. And in this case, these are the people who work with our youngest — and unvaccinated — children every day."

With files from Nigel Hunt