Crews working ‘as fast and as safely as possible’ to repair Cape Breton roads, bridges

Officials in Cape Breton say they're working hard to repair damaged roads and bridges and reconnect areas that have been cut off from services such as hospitals and pharmacies.

A storm Wednesday dumped more than 200 millimetres of rain in some areas, including Ingonish River, N.S., which saw a total of 290 mm during the storm.

Road or bridge washouts in Ingonish, Tarbotvale, White Point and other areas have left residents stranded or facing hours-long detours.

Lyle Donovan, the Emergency Management Office co-ordinator for Victoria County, said repair work needs to be assessed before construction can begin, and he asked people to be patient.

"We're working as fast and as safely as possible. It's all about being safe and getting access to people as quickly and as fast as possible, but we have to be safe when we're doing it," he told CBC's Information Morning Cape Breton on Thursday.

The community of Tarbotvale is now completely isolated after a 30-metre steel truss bridge was washed out. Phone and internet lines into the community were attached to the bridge, and there is no cell service in the area, so emergency officials cannot communicate with residents.

Murdock Burton posted this photo to Facebook of White Point Road, which was wiped out by heavy rains, cutting off the local residents from the rest of Cape Breton. (Murdock Burton/Facebook)

Donovan said the brook the bridge passed over is still "fast, rushing water," so crews cannot get across to check on residents.

Donovan said it could be days or even weeks to get a route to the community.

"We hope Mother Nature begins to work with us and helps us with this daunting task of getting help to everyone."

Residents in Ingonish are unable to get to the local hospital, Buchanan Memorial Hospital in Neils Harbour, or a nearby pharmacy due to impassable roads in the area, including a bridge in Neils Harbour that was submerged Wednesday. The alternate route is a three-hour drive around western Cape Breton.

'The response has been amazing'

Larry Dauphinee, the deputy warden for Victoria County, said the pharmacist in Neils Harbour has been making the long trip to keep her store functioning, and has been sending some prescriptions to Sydney to be filled so customers on the other side of the closed road can get their medications.

The pharmacy has had offers from as far away as Pleasant Bay to house staff who are stuck in Neils Harbour.

Fishermen have offered to transport people who need to get around the closed road, including to hospitals, but Dauphinee said no transfers have taken place so far due to safety and legal concerns.

"The response has been amazing … many fishermen still have their boats in the water and they're willing to transport back and forth," he said. "It's great to see everybody's working together. They're thinking outside the box."

In Dingwall, people managed to sling a rope across a washed-out road and transported supplies using a cooler.

Robie Gourd, Parks Canada's asset manager for the Cape Breton field unit, said a team of engineers is travelling to Ingonish from further north to inspect roads and culverts.

A number of washouts have occurred along a 15-kilometre stretch of the Cabot Trail, including near Broad Cove, where a Parks employee's vehicle fell about six metres when the road collapsed. 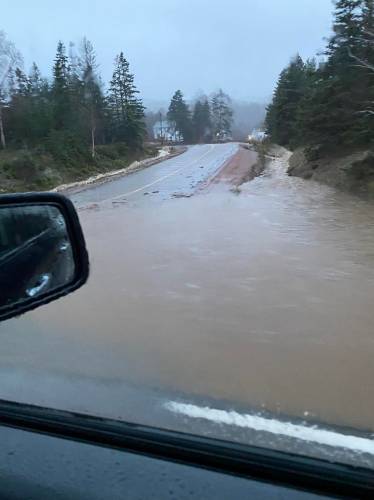 A ditch overflows onto the road Tuesday in the Cape Breton Highlands. (Sarah Barrington)

Jamie Chisholm, the eastern zone district director for the provincial Department of Public Works, said at one point there were 30 to 40 roads washed out on Wednesday, but that number is coming down.

Three bridges in Victoria County are complete losses, he said, including the Tarbotvale bridge, a structure on Oregon Road and another on White Point Road.

"This is well beyond anything I've ever been involved with," Chisholm said. "We also have crews, two shifts working day and night, going around trying to repair some of the easier roads to get those passable, but our top priority is to try to get in and get access to those that don't have access in and out."

Chisholm said the department is requesting assistance from private companies to help with repairs.

Rain continues to fall in Cape Breton on Thursday, with up to 20 mm expected in some areas, according to CBC meteorologist Tina Simpkin.

Classes are cancelled for the remainder of the week at Cape Smokey Elementary, Cabot Education Centre and North Highlands Elementary.

Previous : COVID-19 vaccine for babies and toddlers could be approved early 2022, chief public health officer says
Next : British surfer who doesn’t want to be remembered as ‘the guy that broke his back’