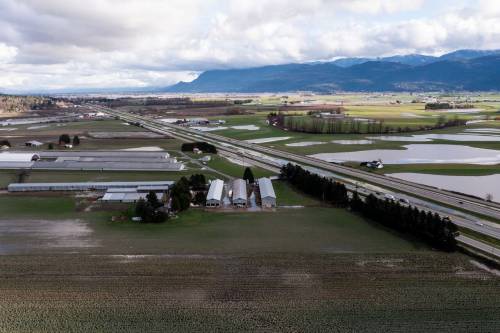 A cold front is set to blanket much of southern B.C. with snow over the weekend, potentially helping floodwaters recede in many communities devastated by floods and mudslides.

Environment Canada issued a snowfall warning for the Fraser Valley and Fraser Canyon east of Vancouver, as well as other regions in the province's Interior. Up to 15 centimetres of snow could accumulate near mountain passes, the agency says.

A special weather statement has also been issued for Metro Vancouver and communities on the eastern side of Vancouver Island, though communities near the water are unlikely to see much snow accumulation.

Many cities in the region, including Vancouver, Surrey and Victoria, will be opening extreme weather shelters throughout the weekend to assist those that need space to warm up.

Armel Castellan, warning preparedness meteorologist at Environment Canada, says the incoming weather conditions will be challenging for drivers, but might help flood recovery efforts in much of southwest B.C.

"The cooler conditions are actually helpful in stabilizing the environment," he said. "We are seeing the conditions ameliorate."

He also said freezing temperatures in the province's Interior would bring down the water levels of the Fraser River.

The Sumas Prairie in Abbotsford, B.C., many parts of which are still under water, may see floodwaters recede due to incoming cooler temperatures. (Gian Paolo Mendoza/CBC)

Calmer river conditions would allow for floodwaters to recede in low-lying areas like the Sumas Prairie region of Abbotsford, southeast of Vancouver, which remains swamped after record-breaking rains in the middle of November.

The northern part of the region was taken off evacuation order on Friday as part of the city's "return home" plan, but most of the area's residents remain away from their homes.

"With the lifting of this order we are asking everyone to exercise extreme caution as they make their way through this newly opened area, especially over the next few days, as we have snow in our forecast," Abbotsford Mayor Henry Braun said on Friday.

All other areas of the Prairie will remain under an evacuation order until assessment teams deem it safe for residents to return, Braun said, adding that there is no set timeline yet. The region is also under a "do not use" water advisory. 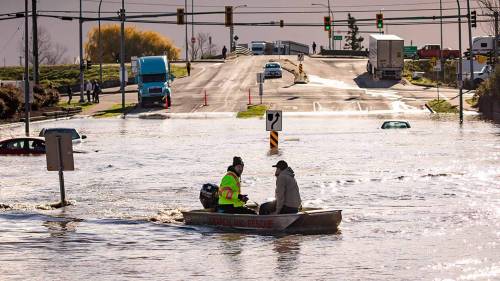 B.C. floods could be one of the costliest disasters in Canadian history

10 hours ago2:01Between highways ripped apart and farms drowned in several feet of toxic water, the B.C. floods could end up being one of the most expensive disasters in Canadian history with losses in the billions of dollars. 2:01

B.C. Transportation Minister Rob Fleming asked residents to be cautious heading into the weekend, with numerous highways still out of commission due to mudslides and floods.

He stressed that drivers should use winter tires when driving on highways this weekend, with travel advisories also in place allowing only essential traffic on stretches such as Highway 3 through the Interior.

Highway 1 through the Fraser Valley, a crucial link between Metro Vancouver and the rest of the country, was reopened earlier in the week.

Highway 99 north of Vancouver, however, remains closed between Pemberton and Lillooet due to a mudslide. The stretch earlier saw a mudslide that left four people dead and one missing during the mid-November storm.

Much of the Fraser Canyon route along Highway 1 remains closed due to slide damage. Highway 8 between Spences Bridge and Merritt was heavily damaged and remains closed indefinitely.

Fleming said the government is in the planning stages of determining temporary measures to open major arteries between B.C.'s Lower Mainland and the Interior, including the Coquihalla Highway (Highway 5), which had five bridges wash out in November. 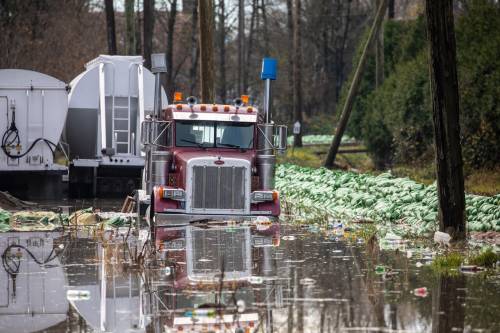 A flooded semi-truck is pictured near sandbags in the neighbourhood of Huntingdon in the Sumas Prairie. (Ben Nelms/CBC)

B.C. Finance Minister Selina Robinson said it was still too early to determine how much rebuilding from the floods will cost, but that it was likely to affect the province's bottom line.

Numerous animals have been lost to the floods, in addition to homes and infrastructure. This includes 628,000 chickens, 420 dairy cows, 12,000 hogs and 110 beehives, according to B.C. Agriculture Minister Lana Popham. 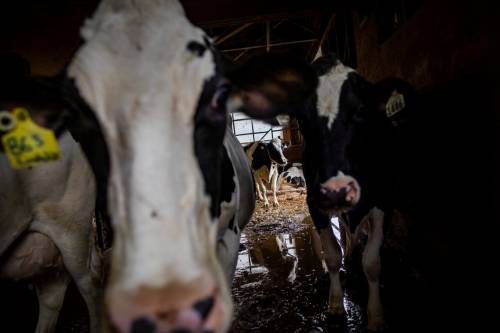 Dairy cows are pictured at the U & D Meier Dairy in the Sumas Prairie. B.C. Agriculture Minister Lana Popham said 98 per cent of cows in the area were saved from rising floodwaters. (Ben Nelms/CBC)

Popham said 97 per cent of egg-laying chickens and 98 per cent of dairy cows on the Sumas Prairie survived the flooding, but she expects turkey prices will rise this Christmas because of added transportation costs.

Her federal counterpart, Marie-Claude Bibeau, is expected to visit areas affected by floods next week to speak with farmers and ranchers.

With files from The Canadian Press

Previous : Merkel makes farewell plea for Germans to get vaccinated
Next : Boy, 5, dies of sepsis hours after being sent home from hospital with ‘stomach bug’