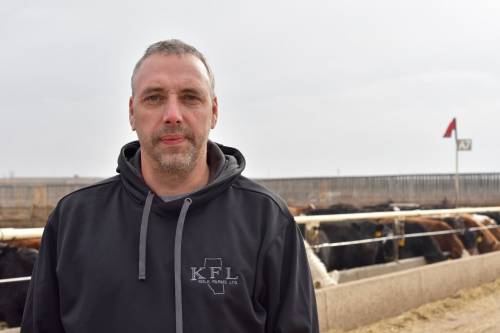 If the train that Leighton Kolk has been waiting on for days doesn't arrive by noon on Sunday, the Iron Springs, Alta.-area feedlot operator says he will be completely out of feed for his cattle.

"The train was supposed to arrive Tuesday and it's still not here and now it's Friday morning. If it doesn't arrive soon, we'll have to have people out shovelling and scraping the bin bottoms," Kolk said.

"In 30 years of business, I've never experienced where we don't know what we're going to feed the cattle Monday morning."

An unprecedented situation is unfolding right now in Canadian cattle country, where industry groups say a widespread feed shortage has escalated into a crisis situation.

Feedlot operation Leighton Kolk, pictured here in this file photo from 2019, said that he, his neighbours, and his staff are helping each other out by sharing feed when they can and working overtime to find creative solutions to the feed shortage. (Sarah Lawrynuik/CBC)

Last summer's extreme drought in Western Canada means domestic supplies of hay and other feed grains are low, and many cattle producers have resorted to importing large quantities of corn from the U.S. to get their animals through the winter.

According to the Alberta Cattle Feeders' Association, an industry group that represents feedlot operators in the province, 75 per cent of its members report having corn shipments delayed.

Many are growing increasingly desperate. Several large feedlot operators expect to run out of animal feed "within days" due to delayed shipments, said Janice Tranberg, president and chief executive of the Alberta Cattle Feeders' Association.

"These feedlots house anywhere from 20,000 to 40,000 head so this is now a serious animal welfare issue," Tranberg said.

On Friday, Canadian Pacific Railway Ltd.'s chief financial officer Nadeem Velani said his company moved more than 8,100 carloads of corn into Alberta in 2021, compared to just 600 carloads the year before — adding the unprecedented demand required the creation of facilities and a supply chain that didn't previously exist.

But he acknowledged that CP Rail has also been challenged by a number of issues this winter, including the Omicron variant and an increase in the number of employees out sick as well as well extreme cold weather that has forced the company to run shorter trains and reduced train speeds.

"We have seen some challenges as well with customer labour shortages, and what that's meant in terms of loading and unloading at some of the customer facilities where they've been short-staffed," Velani said at the CIBC Western Institutional Investment Conference on Friday.

In an email, CP spokeswoman Salem Woodrow said the Calgary-based railway is "committed to servicing our customers and playing a role in enabling feed to be supplied to feedlots during this challenging crop year." 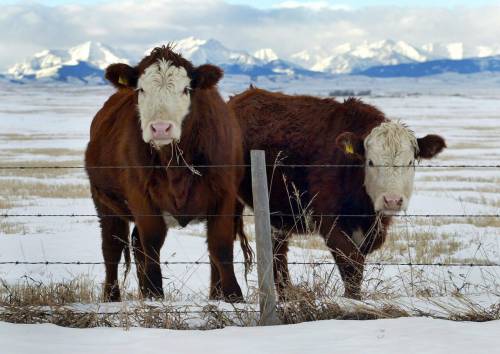 It's been a challenging past year for Alberta ranchers, with many hit hard by drought and soaring feed costs. (Jeff McIntosh/The Canadian Press)

For his part, Kolk said he knows of up to 20 cattle producers in his area who are experiencing similar challenges with corn deliveries. His own operation has come "close to the brink" in terms of running out of feed three times since the fall, in spite of the fact that he had firm contracts in place with U.S. suppliers for a train-load of feed corn to be delivered each month between November and April. So far, he's only received one-and-a-half of his anticipated shipments.

He said he, his neighbours, and his staff are helping each other out by sharing feed when they can and working overtime to find creative solutions.

$100 for a rib roast? Yep. Some customers are forking out the cash and driving demand

"The last time we were almost out and the train finally came in, my staff went and worked an 18-hour shift all through the night just to get the bins refilled."

If he runs out of feed, Kolk said he will be forced to essentially put his cattle on rations.

"We can switch some things, but it would be like if you were used to getting three meals a day and then all of a sudden the only thing we have to feed you is dry Rice Krispies or something," he said.

"It's going to cause health issues, because you can't just go and change an animal's diet like that."