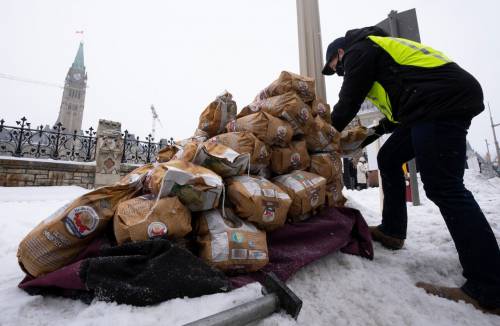 Canadian and U.S. officials are scheduled to meet this week to see if progress can be made to end a dispute that resulted in Canada suspending all shipments of potatoes from Prince Edward Island to the United States.

Officials from the Canadian Food Inspection Agency (CFIA) will have a virtual conversation with their U.S. counterparts from the Animal and Plant Health Inspection Service (APHIS) on Wednesday.

According to a statement from CFIA, officials plan to discuss "a path forward towards the resumption of trade of P.E.I. fresh potatoes."

Canada suspended the shipment of P.E.I. potatoes to its largest export market after the potato wart fungus was detected in two fields late last year.

Ottawa has argued the self-imposed ban was necessary, as it feared the U.S. would enforce a ban of its own, which would be more difficult to lift in the long run.

Bags of Prince Edward Island potatoes were brought to Ottawa on Dec. 8, 2021. The Canadian Food Inspection Agency imposed an export ban at the end of November to satisfy concerns raised by the U.S. over the discovery of potato wart in two P.E.I. fields. (Adrian Wyld/The Canadian Press)

The decision infuriated P.E.I.'s Premier Dennis King and many potato farmers. The fungus was detected in two P.E.I. fields where the potatoes grown were intended for processing in Canada, not export to the U.S.

The CFIA statement says the focus of the meeting will be a national survey it conducted in the fall of 2021 of potato fields in Canada following the discovery of the wart fungus.

"Soil samples were collected and tested from across Canada, including 178 samples from non-regulated seed potato fields in P.E.I. No potato wart was detected in any of the samples," the statement said.

That survey is separate from investigations also being conducted by the CFIA after inspectors found potato wart in two P.E.I. fields. The Canada-wide survey provides some additional information about the spread of potato wart in Canada, the CFIA statement said.

The Puerto Rico export market is also expected to come up in this meeting, amid a push by both P.E.I. and Puerto Rican importers to have exports to the U.S. territory resume immediately.

Potatoes are not grown in Puerto Rico, meaning the potato wart fungus does not pose any sort of risk to crops.

Roughly 25 per cent of P.E.I.'s potato exports to the U.S. end up in Puerto Rico.

"The CFIA will raise the shipment of P.E.I. potatoes to Puerto Rico at this meeting and will continue to treat this issue as a priority until those exports resume," the statement said.

Canadian officials are promising to provide an update to farmers through the P.E.I. Potato Board once the meeting is over.